Sometimes its nice to travel light. What do you really need for camping? 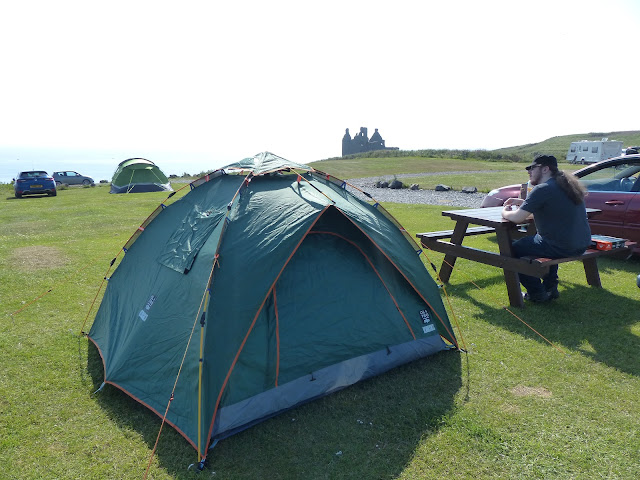 2) A couple of airbeds 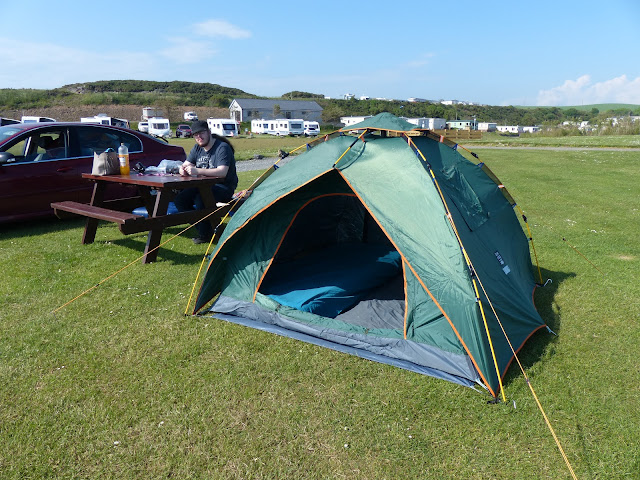 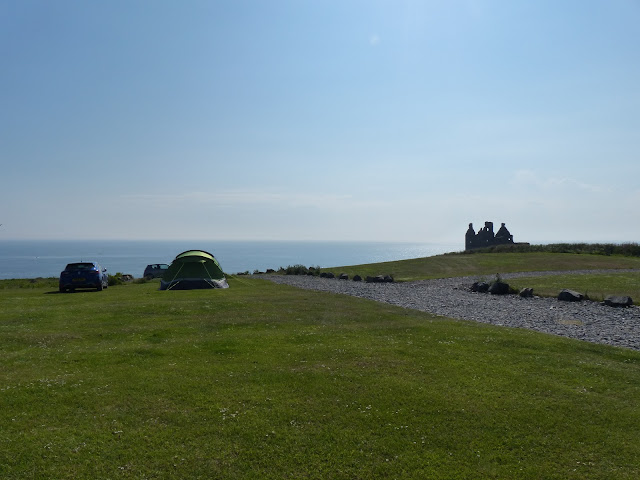 Camping, at it's simplest.

So it's pretty obvious that I didn't take the ferry to Scotland just to go camping for one night. I was actually in Carlisle to pick up my eldest son Elan who is at the end of his last term of Uni. As an Illustrator, he had an end of year show which is the culmination of his three years of work. 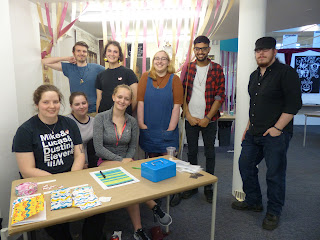 It was a multi day event so I went from a Wednesday to the Sunday. I stayed in his Student house in a room that is right beside a busy junction on a main road. We also had extremely good weather, with the temperatures hitting 30 degrees on one day. 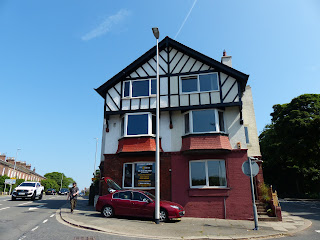 The heat and the noise were a bit much for me, and coupled with the fact that my son has some of his own camping equipment that we had to take back to Northern Ireland anyway, it made sense to use it to get out of the city and closer to the ferry so that we would have a shorter journey to the ferry in Cairnryan.

I had a couple of days in Carlisle to hunt out the perfect campsite on the internet, since my son had lots of goodbyes to say to his friends and was busy most evenings and so I was on my own. The Galloway and Dumfries area has more campsites than you could shake a stick at, and most of them look fantastic. I would love a fortnight just to spend some quality time in this area.

I'm a sucker for a view though and so when I came across Castle Bay Holiday Park in Portpatrick my mind was immediately made up. It was only 25 minutes drive to the ferry at Cairnryan.

Ruin One of the Day

On the Saturday morning we got all of Elans worldly possessions in the car, made sure the camping gear was on top and set off. On the way we stopped at a Cafe just outside Dumfries for a big breakfast to set us up for the day, and to buy supplies for dinner that night. Closer to our destination, we stopped off for a leg stretch at Glenluce Abbey which is not far off the main road on the way to Stranraer. 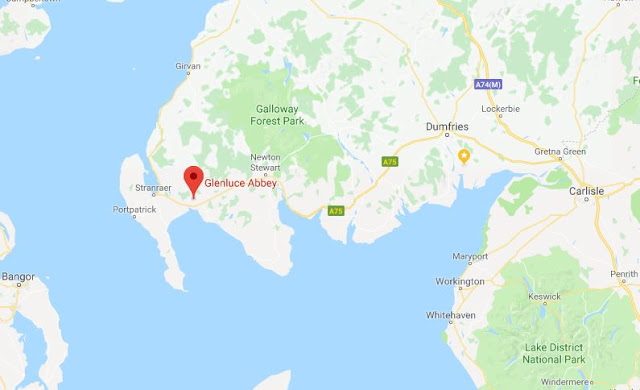 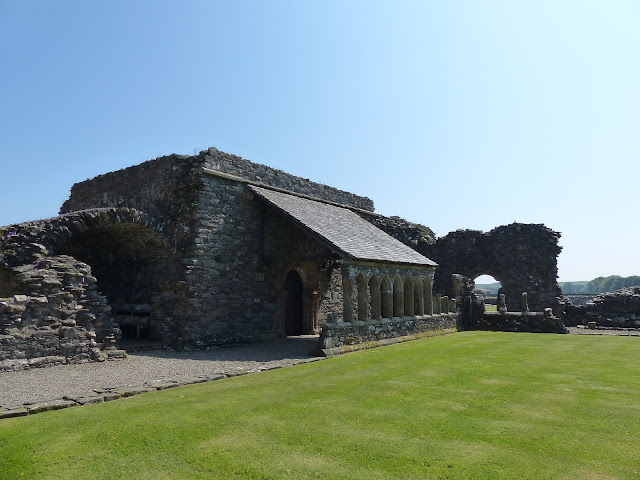 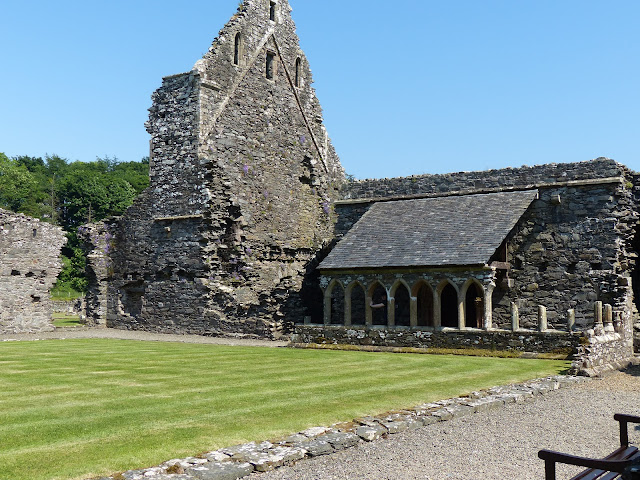 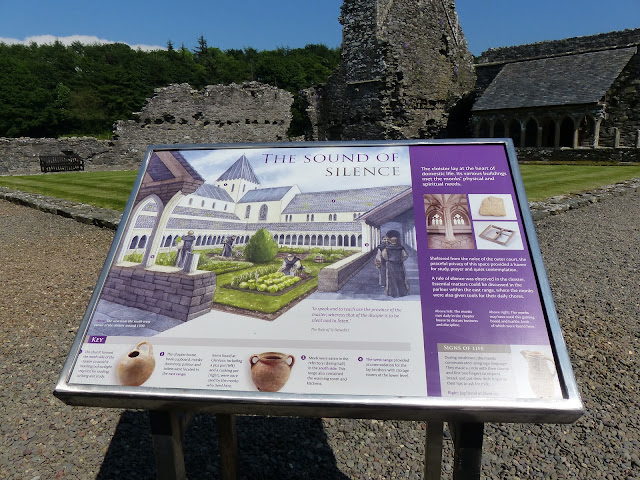 Next stop Portpatrick and Castle Bay Holiday Park which I navigated to with the Sat Nav. Having booked in at reception and paid our £18 we set up the tent. A couple of years ago I had bought the Olpro Pop which is an umbrella style pop up three berth tent. I liked it a lot but donated it to my son for his own camping kit. The tent is available in three colours and the one I had bought and donated was green. I then bought myself an orange one to replace the one I had given away. I had one airbed with me, which was for Elan to sleep on when we were in Carlisle (I took over his bed) and I'd also brought my own bedding for staying in Carlisle. So all I needed to do was buy one cheap airbed from a supermarket on the way to the campsite and he had a sleeping bag he had as part of his camping kit. We had no chairs, no cooking gear, nothing other than the tent and the beds. And you know what? That's all you need.

Our campsite was at the end of a drive through the Holiday Park, overlooking the sea and also a spectacular ruin called Dunskey Castle. The weather was beautiful, warm but the sea breeze left the temperatures comfortable unlike Carlisle where is was too hot.

Ruin Two of the Day
There is a public right of way to the castle and apparently it takes you past the castle right into the fishing village of Portpatrick.  We were not there long enough to go on that walk, but we did explore the ruins. It is possible to get right into the castle ruins, up a spiral staircase and into the upper floor. It was a second ruin of the day. 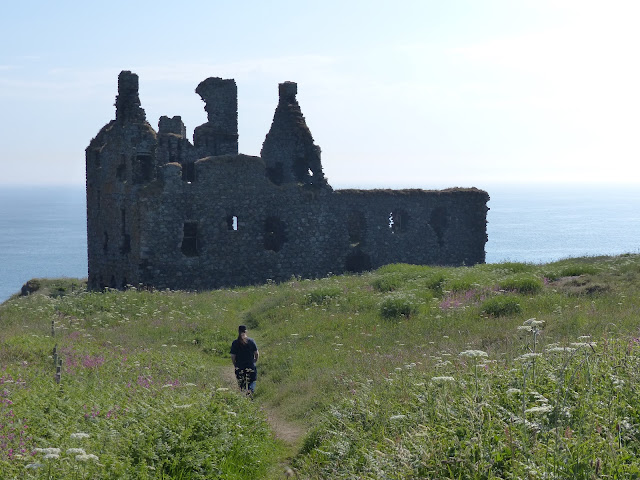 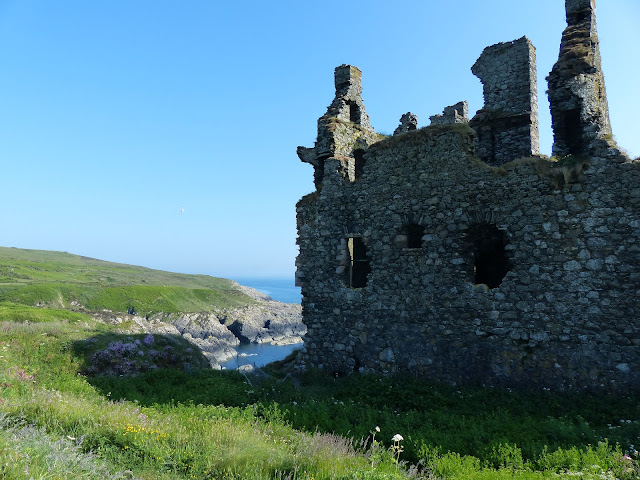 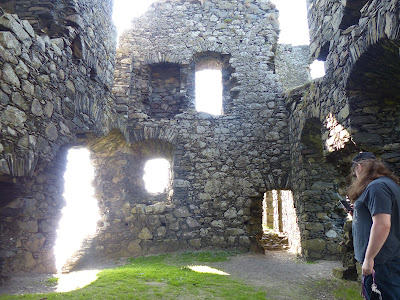 Back at the campsite, I enjoyed a bit of rest time with a spectacular view overlooking the Irish Sea from which, according to David the warden, you can see Northern Ireland on a clear day. 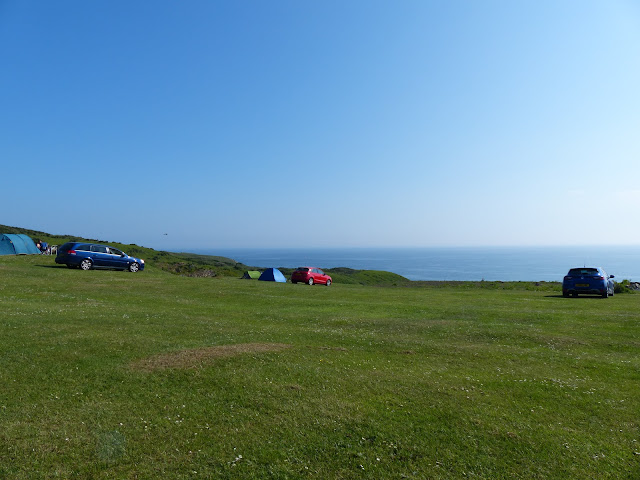 Our dinner was simple - a french stick, a packet of ham and a couple of beef tomatoes and crisps. Dessert was a punnet of fresh cherries. This was one of the best dinners we had in the whole trip. We each had our own swiss army knife, you'd nearly think we'd done this camping thing before.

About 8pm the scottish midge made an appearance. They were malicious and the only thing we could do was pile into the car and get out of the campsite. Everyone else in the campsite did exactly the same thing. Except these people who turned up in a campervan. 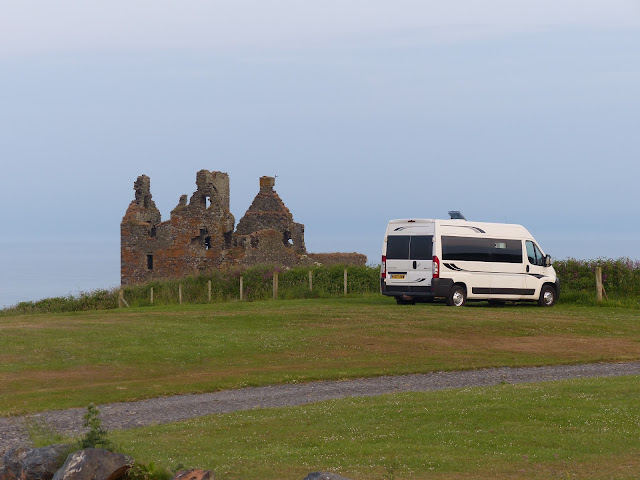 Ruin Three of the Day

We decided to explore the village of Portpatrick, which is a small fishing village with a couple of hotels on the sea front. We also happened to be in town at the same time as a group who were obviously having a meet and were all Moped enthusiasts. We had come across them camping on a sports pitch on the same road as our campsite, and it seemed they were all from Northern Ireland too.


We explored the village and came across another ruin in an ancient graveyard. The photo below shows the dovecote which is inside the old graveyard. 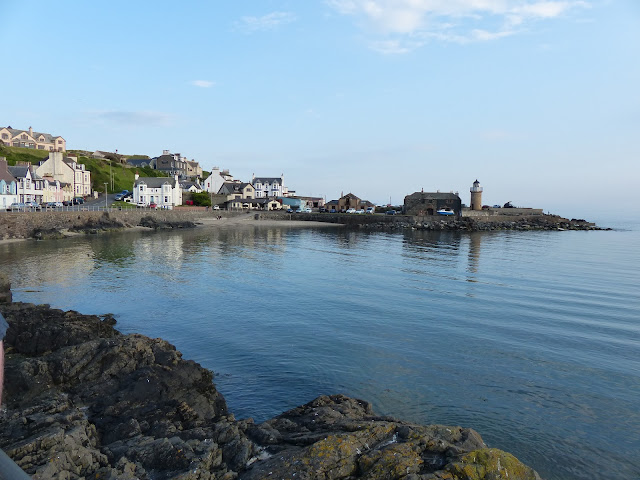 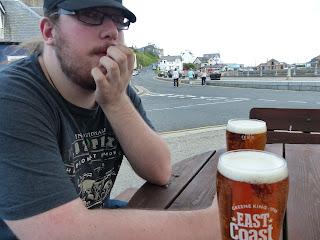 The following day we packed up our tent and belongings and went back to Portpatrick in search of Sunday Lunch. We were a bit early and went for a walk along the seashore and visited a pottery and a couple of tourist type shops. We bought some locally made lemon and lime marmalade for bringing home. We saw the most enormous Jelly Fish along the shore. A woman was trying to take a closer look at it when her boyfriend tried to push her in! 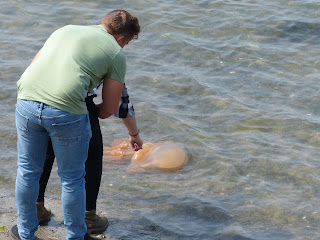 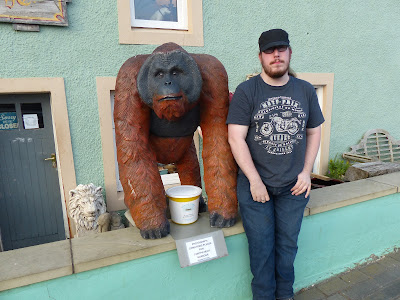 This last photo shows the path and steps that goes eventually to Dunskey Castle and the campsite as well as beyond (I believe it's a coastal walk). 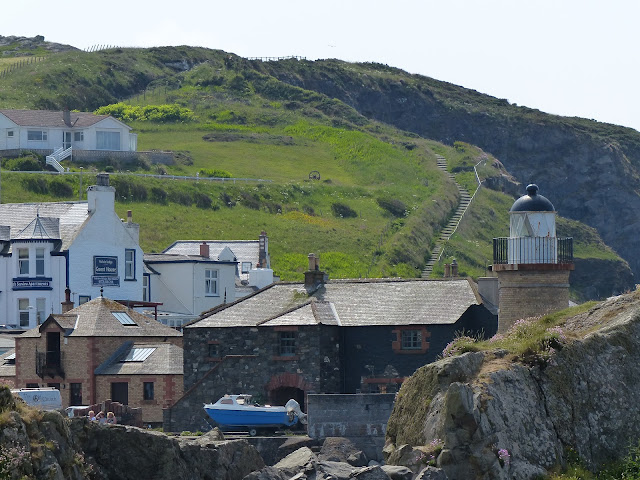 I would recommend Castle Bay Holiday Park because of it's spectacular views, the easy walks to both Dunskey Castle and along the shore to Portpatrick. The village had plenty to offer too with a few hotels, a couple of arts and ceramics shops and a lovely marina to explore. Portpatrick is very convenient to the ferry but there is so much more to explore in this area and the next time I'm in the area I hope to find out more about the place.