I had the honour of being invited to open a new campsite this Bank Holiday weekend, May 2018. Paula and George Canning from Ballykelly area near Benone had already got a busy fishing lakes business when they decided to open up a campsite beside the lakes. I had been asked to give some ideas and feedback and then coming up to the big weekend I was asked to cut the ribbon and say a few words. It was combined with a fund raiser for a young relative of theirs, a little boy called Caden Jack Moore who has recently had a bone marrow transplant The Adventures of Caden Jack Moore.

It was to be a weekend of catching up with old friends, as friends old and new came to help celebrate this big opening.  So it was a busy weekend in blistering hot weather and we all got very sunburned even with the factor 50.

The site itself is small in scale and is flat and dry with hardstandings for Motorhomes, Campervans and in the future, Caravans. At the moment there is no electricity so the site, although open, is still in development. There are a couple of fire pits sitting around and loads of picnic tables built by the local Mens Shed. There is one toilet and one shower for everyone in the rear of the main cabin with only a short one minute walk from the campsite along a pretty wooded path.

Access to the site is along the Duncrun Road. The turn in to the site from the main road is an acute angle, and because of this it is advisable for people towing caravans to approach from the East. The Sat Nav co-ordinates are 55°07'50.3"N 6°55'55.9"W. The access road is steep enough but quite wide and there are 10mph speed restrictions signs along it's length. Roadside signage is not in place for the campsite as of May 2018 however there are signs for Duncrun Fishing Lakes at the road side. The nearest village is Ballykelly and there are two shops. One of the shops will deliver for 50p with a minimum order of £30 and you just put in your order at the campsite (there are two times a day to do this). Just past Ballykelly is the turn off to Magilligan Point with the Point Bar that does food, a beach and the ferry to Donegal. Another couple of miles along the road is Benone Strand with caravan parks, the Tourist Complex and a cafe called 'Waves' who do a 'golfers fry' for £5.95 and open on a Saturday and Sunday morning from 9am. Incidentally a Restaurant called 'Coast' does a free pick up and drop off for campers at Waterfall Caves. 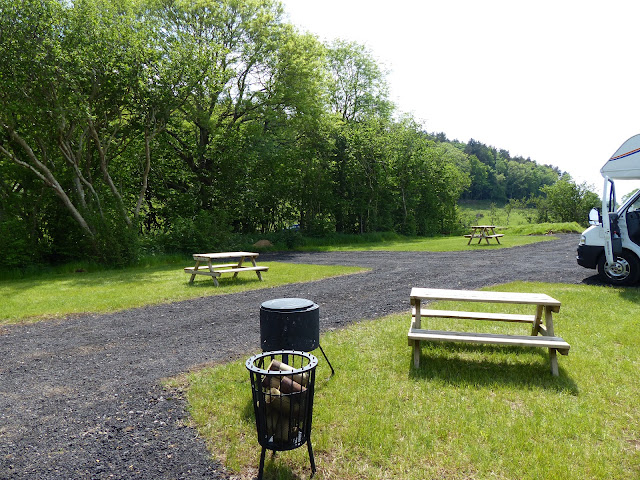 The facilities for campers are mostly based in the cabin which already serves as an office and small snack shop for the fishing business. The new campers facilities are a kitchen dining area to the rear of the building with an open to the outside porch with seating. Directly behind the cabin is a play area with climbing frame, a see saw and soft surface. 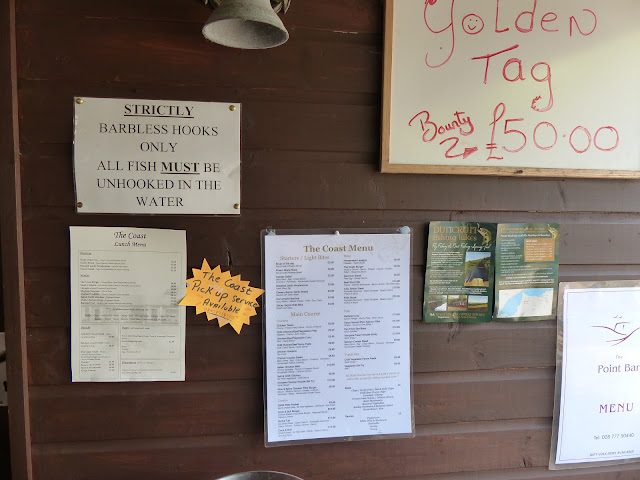 There are fishing lakes which are very pretty and there are rod hire and tickets are available in the office. Campers can walk around them but there are no dogs allowed and they must be quiet when fishing is in progress. There is a little bit of a Canadian flavour to the lower lakes landscape, and the upper lake is a turquoise pool with a backdrop of the famous cliff face of Benevenagh Mountain. The upper lake is also overlooked by the other type of accommodation available at this site, four 'caves' which are subterranean rooms with glass frontage. 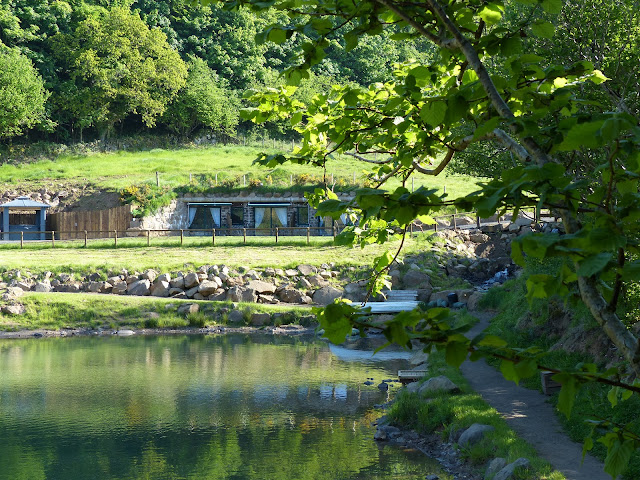 There is another walk which is more dog friendly (because no dogs are allowed around the fishing areas). It is the 10 minute Viewpoint Walk which takes you on a circular route around the owners land, with a spectacular viewpoint stop off for photos and actually enough room to park about four motorhomes so it may even be a future motorhome park. Off this walk is another walking route which is the 'Game of Thrones' walk which takes a line up the hill side to the cliffs, taking in the areas that were used as filming locations for the TV series. 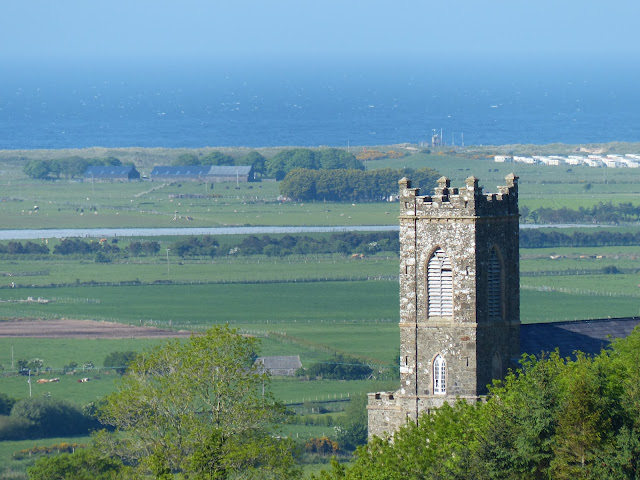 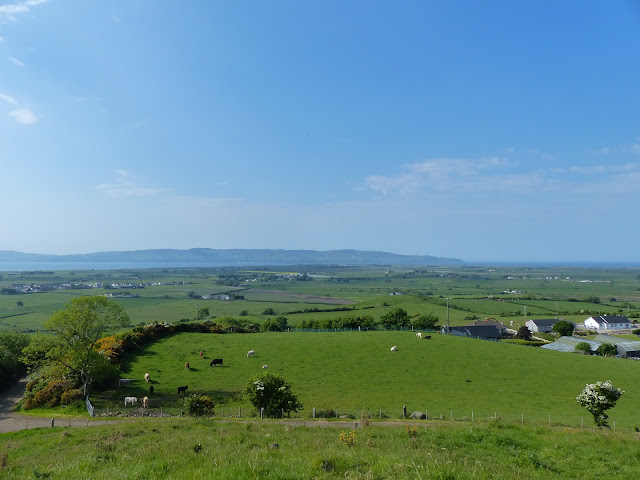 On Saturday the main party and fundraiser took place. There was a barbecue, a bouncy castle and loads and loads of people turned up. They were a mixture of fishing people, friends and family of the Canning Family who were supporting the new business venture, family of young Caden who the day was in aid of, neighbours and people who just called in to support the event. To date the day raised £1400 with more due. Young Cadens father, Brian, provided the a Tepee for everyone to enjoy as a communal space and explained that he had to give up a job which he loved because of the care that Caden requires. His prior job was using the big Tepee as a classroom for teaching outdoor activities to children. 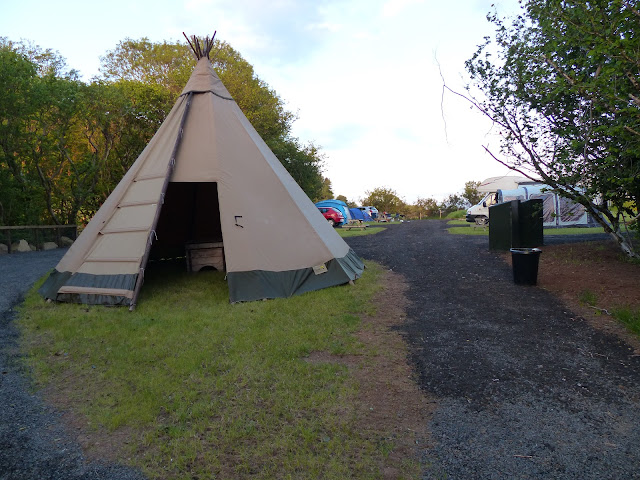 On the day of the big opening 'do' I had the honour of cutting the ribbon and a few words were appropriate. I started with a brief description of who I am and what I do, which is that I am a blogger and camping enthusiast. I then touched on the fundraising element of the fun day and then led everyone on a round of applause for the Canning Family who worked so hard on the site. There was quite a crowd and afterwards we all went through to look at the campsite and John and I hosted some tent and awning tours. In the meantime back in the cabin the barbecue and wine was in full flow. 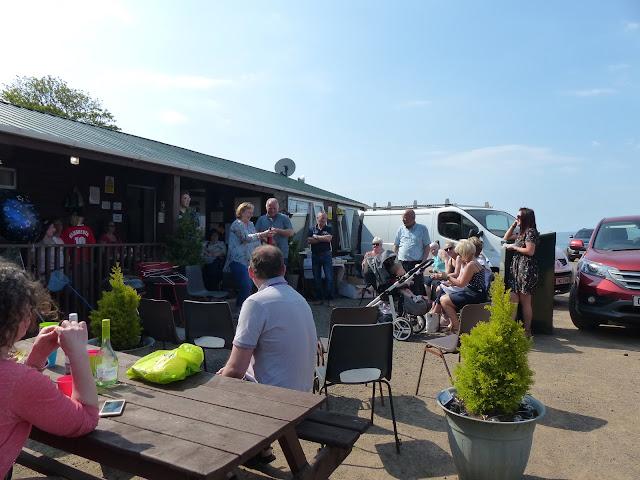 On Sunday it was pack up day. We started the day the only way we knew how. Bacon and coffee. 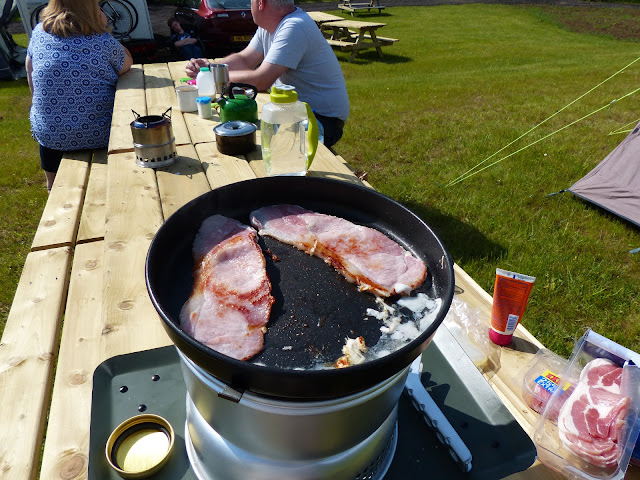 Then it was time for John to do his Yoga moves as he struggled to get the air out of the tent. He is available for weddings, parties and bar mitzvas anywhere in Northern Ireland. All in all a fantastic weekend and a rough idea has come together for a future meet up with many of the friends I met on this camping trip. 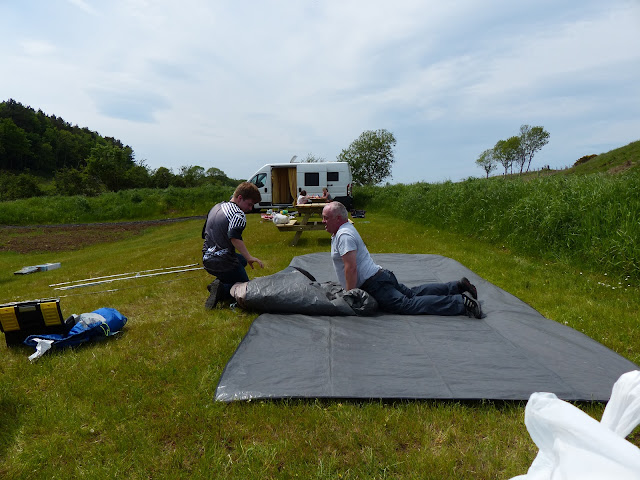