Olpro Pop Review 2018 after two years of use

The Olpro Pop is an umbrella style tent which is advertised as a two berth tent, not to be confused with a 'pop up' style tent that explodes once you remove the strap from a circle of fabric.  It has built in poles attached to the fabric which have 'elbows' incorporated into the design. These bend at the joint for packing away.

I have bought not one but two of the Olpro Pop since they were first released in Spring of 2016. The first one I bought as a weekend and touring tent as a replacement to a Vango Halo which I never got the hang of pitching easily. The main reason why I'd bought the Halo in the first place was because of the two doors and not because of it's technical capabilities. As I am by choice a weekend fair weather camper, where if it is due to rain I simply don't go, then the flip side is that in a Polyester Mix fabric tent you can get put out of it when the sun comes up in the morning with the heat and stuffiness. One simple way to get a bit more of a lie in is two partially open both doors so that the breeze can get through. The Olpro Pop also has a silver reflective inside which is supposed to help with keeping the sun and light out. I think it is quite effective in this regard.

The Vango Halo is a great piece of kit, but I found that I lacked the strength to get the third pole in. The Halo has a Geodesic shape and so the third pole makes it very windproof. Where it wins over the Olpro Pop is in pack size, it is a tiny bag and great for cyclists, hikers and bikers. The Olpro Pop is unwieldy in comparison, the pack size is about the same as a cheap camping chair although it is great for car camping. I don't think it would do as well in the wind as the Halo.

The Vango Halo is a technical tent designed to withstand harsh conditions, and it is unfair to compare the two. The Olpro Pop has never claimed to be a 'mountain' tent or a 'lightweight' tent, or indeed is it's price point indicative of a technical tent - but as a car camping fair weather or festival tent it is excellent.

To make up for it's pack size, the stuff sack does come with two padded rucksack type straps. This makes it fantasic for carrying into a festival for example, and the fact that the pegs are in a zipped pocket on the side of the bag means you have everything you need in one package.

Initially I bought a green one, however it does come in green, orange and blue. When I bought a second one I fancied Orange.

I brought it to the Lake District where my nearly grown up son used it as a pup tent. He lived in it for two weeks and had no problem with the heat due to it's silver reflective interior. It also has two mesh windows which further helps to cool it down. I donated the green one to him as the start of his own camping kit and bought myself another one in Orange.

The Olpro Pop is meant to be a two berth but I think you could squeeze three roll mats in and so three young people, slim people or kids could sleep in this tent. I found that a single airbed of around about 70cm wide took up less than one half of the tent.

The only real issue  I had with it was to do with the doors. Many small tents have the same problem, The door is a 'D' door which hinges along the bottom rather than the top or side. That means that unless you take the time to roll and tie up the door every time you want to go in or out, the door and the inner door (there is a fly mesh also) gets stepped on or pulled when crawling across it. This has led to some minor damage on the fly mesh, and is also a trip hazard when getting in and out of the tent. But then if the hinge point was along the top instead then you would lose the ability to partially open the door under the shelter of the rain fly.

The fly mesh is black and this means that if you want to zip up the fly mesh but not the door (when it is hot) there is still some privacy as long as you don't have the door open on the other side too.

I found a prefered way was to have the mesh closed on both sides but the outer door partially open at the top to let air through. The overhang of the outer part of the tent prevented rain from getting in through the top part of the door.

The inner can be removed leaving the outer on it's own which could be used as a beach shelter for sun protection. The inner is attached with sturdy clips as is the separate ground sheet. The inner 'pod' has it's own sewn in groundsheet so there is essentially two layers underneath you. Being able to separate the tent can help dry it out quickly if you are in a hurry to pack up. On a particularly sunny morning in Langdale, in the Lake District, and after a rain soaked night, the Olpro Pop was separated and took about five minutes to dry so we could get on with packing up and leaving.

On a holiday to Kinsale the year after going to the Lake District, I got caught in rain. Being away for a longer holiday where I had booked time off work and also considerably farther away from home, if it rained I was stuck with it. I found the tarp set up very useful for wetter weather and this also gave me somewhere to cook and read.

On this occasion I had my dog with me. She prefers to be in a crate when camping (it helps her settle at night). The tent successfully held my airbed, sleeping gear, the crate, my cooking gear and my chair folded up when my car broke down and I had to unpack my car completely to get the car to the garage. 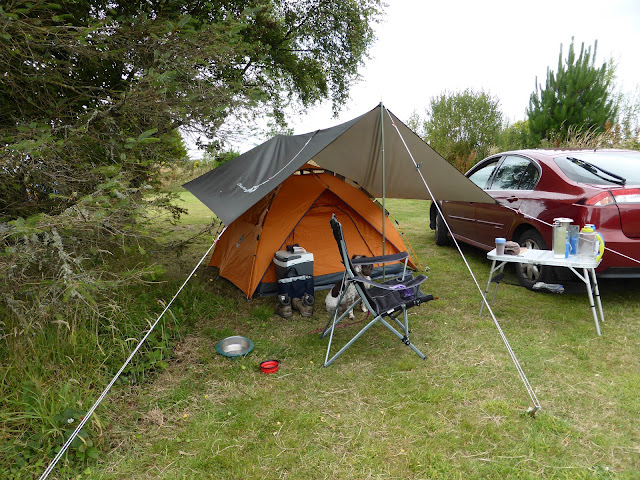 All in all I would highly recommend this tent for car camping. I would recommend it for young people/children and couples and for solo travelers. It is very good for touring and changing camping spots frequently as it takes just two or three minutes to pitch and about five minutes to take down.

It is particularly suited to festival use. The orange colour in particular would stand out in a sea or green or blue tents at a festival.

Having two doors is a unique feature, and the only other tent that I have found that has this feature is the Vango Halo, which is a different league of tent altogether given that it is designed for adverse weather and lightweight travelling and has a price point a lot higher than the Olpro Pop.

Very easy to pitch and take down
Surprisingly roomy inside
Great ventilation makes it a cool tent
Two doors opposite each other, can change which door you use as the 'main door' if the wind changes direction.
Two doors eliminates build up of heat.
Mesh inner door keeps the bugs out
The website is very good and makes the buying process very quick and easy

The bag could do with being a little bit bigger, it can be a challenge to get the tent back in the bag
The poles weakest point is the 'elbow' and looks like it could break - be careful!