A bit late posting my summer adventures, this camping trip was from June and the first of the 2019 season.

It was a  'chuck it in the car' thing and head off into the wild blue yonder with not a whole lot of forward planning. I wanted remote, time out, space, peace and so it was I headed to Fanad in Donegal. I haven't been in years plus I'm a sucker for a campsite with a view and since it was a bank holiday the previous weekend, I reckoned I'd have the place to myself.

I headed to Knockalla Campsite, ringing ahead to make sure there were some tent spaces (there was) and stopping off for some cash on the way. I went via the coastal route which takes you over the top of Knockalla Mountain. I wouldn't go any other way and if you try this you'll see why.

The campsite was completely deserted, I was the only person there camping. I was solo this time and I brought a poly tent because it was easy to put up alone, I can stand up in it and the weather forecast could be described as 'iffy' and so therefore I wouldn't have too much trouble drying the thing again once I got home.

Once the tent was up, the airbed blown up, the chair put out front with a Knockalla Campsite brochure marking page 3 of a book,  I got the Trangia fired up for a well deserved cup of coffee.

I had brought a skandika sleeping bag which is rated to roughly +5 degrees but I woke about 2am with teeth chattering feeling very, very cold. A silk sleeping bag liner I found in my camping kit did the trick and I slept very well after that until the bloody birds woke me up before 6am.

The following day I found that the local eatery at the Pier in Portsalon did soup and a cheese toasty for €7.90 and that did for lunch. I drove up to Fanad Head where there is a lighthouse. Things are changed a bit since I was last there, I found a new car park with a ticket office selling tours of the light house but I had no interest in a tour, I wanted to walk part of the headland instead. So I parked my car at the layby in front of the lighthouse gates and hitched the leg over the fence as others were doing and hoped that nobody would shout at me for leaving the car there or going onto (presumably) private ground. There is a former barracks beside the layby and by heading towards shore you can see a concrete lookout. Once out there it is actually the best place to photograph the lighthouse across a deep ravine with the torrid sea far below. 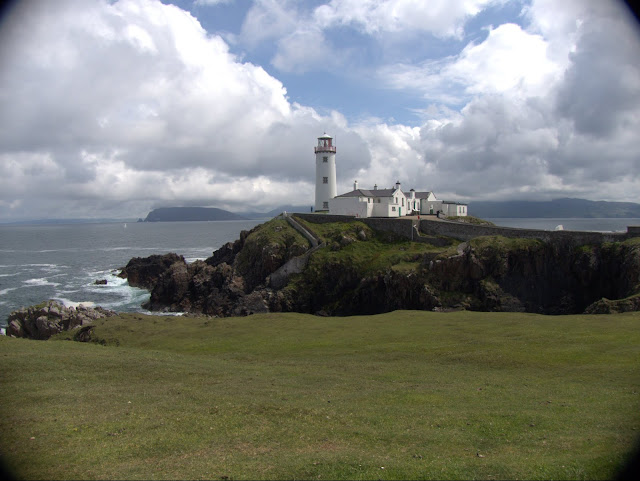 There is a wall between the barracks compound and a different beach over to the left of the shore. There used to be a gap in the wall but it's blocked up now. I wanted to go to this beach because I knew that there were very colourful stones. I had a bowl of these beautiful stones in a previous house which I varnished and I don't know what happened them (lost them when moving house) but I still have one green one left. It was actually one of the reasons I went to Portsalon and it was very frustrating to be prevented from going on the beach.


I headed out for tea again and got a medium cooked steak and chips along with a weird desert made from moss which was a bit like a milky jelly only it was pale green.


In the evening I was truly knackered, I don't know if it was the bit of walking or the sea air but I was zonked and it was lights out at 9pm! Unfortunately my airbed decided to be an ex-airbed and I spent the night very uncomfortably and wishing I'd packed a spare.

I woke up to a glorious morning and all was forgiven. I knew that it was to rain, and in fact I could see the black clouds rolling towards me. There's nothing like an imminent rain cloud to make striking camp quick and efficient and it was literally half an hour between waking and getting into the car with the first fat raindrops hitting the windscreen as I exited the campsite.

I went home a slightly different route through Kerrykeel. I could see a little restaurant called The Narrow Quarter was open and so I used the tenner from the key deposit to treat myself to an Irish Breakfast of a sausage, bacon, white pudding, soda bread, egg and a pot of tea. It was a great wee restaurant and I would think it would be lovely for an evening meal.


Knockalla Campsite has somewhat changed since I was last there, the touring caravan and motorhome area is very smart with brand new tarmac and neatly mown grass. It looks quite polished and has great views. A couple of weeks after my visit my parents went in their touring caravan and really enjoyed their stay.

The campsite facilities are great, the amenities were very clean and you need a token for the shower costing €1.50 which is bought at reception. The staff member who dealt with me was very friendly and there is a lot going on at main reception I didn't take time to explore. It looks like there is a games room and maybe a takeaway too.

There are quite a few statics but I wasn't overlooked. In the screenshot below the camping symbol is more or less beside where I  pitched my tent. 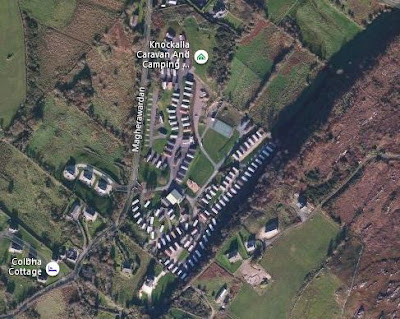 The camping area I used is on a headland with an amazing view over the beach at Ballymastocker Bay and it is about a 2 minute walk to the loo. There is a water supply right beside the camping area. There are no marked out pitches so even if there were other campers there I'm sure there's enough room for privacy. There is another camping area beside a large football pitch in a valley, I saw bigger tents so it is possibly reserved for larger units. It would not have the same great view but then it would likewise be more sheltered in bad weather.

I wouldn't hesitate to go back and I hope to do so soon.