Our first proper walk 'The Bluestacks Way' or part thereof

No camping this time, we stayed in a Guesthouse so that my son and I could undertake the last section of the Bluestacks Way.

The Bluestacks Way is a two and a half day walk starting in Donegal and going past Lough Eske towards Cloghmeen Hill and on through the mountains to Glenties. We decided I'd do the last section, which was the half day river walk following the Owenroe River to Ardara which is about 12km.

It is also a part of the international walk 'The Appalachian Trail' the 'IAT'.

"The IAT.....is a hiking trail which runs from the northern terminus of the Appalachian Trail at Mount Katahdin, Maine......after which it follows a ferry route to Newfoundland and Labrador. As of July 2015, there were IAT walking trails in Greenland, Iceland, Norway, Sweden, Denmark, Scotland, Northern Ireland, Ireland, Isle of Man, Wales, England, France, Spain, Portugal and Morocco" from Wikipedia 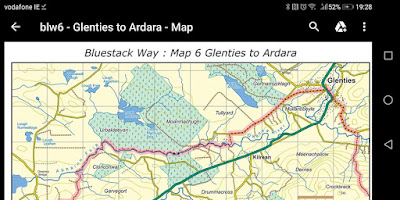 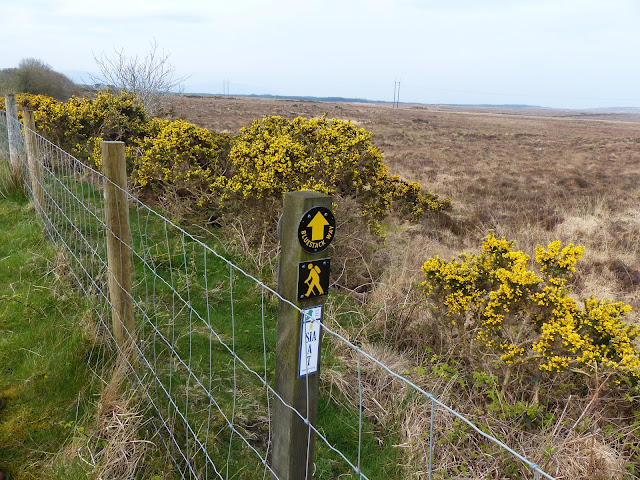 Leaving Glenties the first couple of kilometers is on quiet country road, and very well marked with posts. Then you take a left into a field where a grassy path directs the walker over a bridge to the far side of the river. The grass was worn into a path  and easy to follow. The field divisions were over a stile and the first few were fine, but after the first two or three the big space between the steps, which are probably better suited to male legs, were getting tough for me. 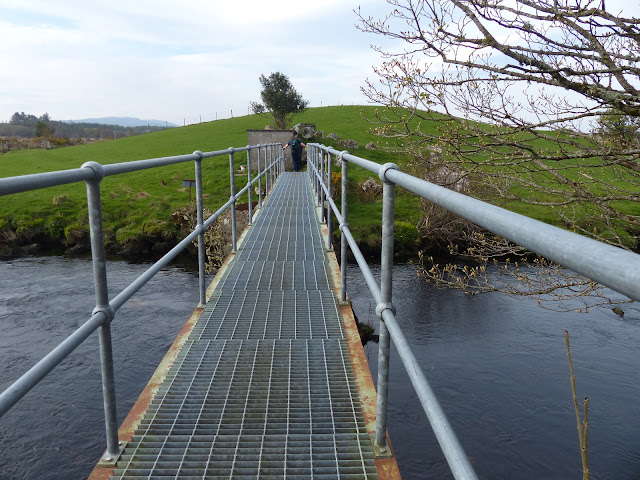 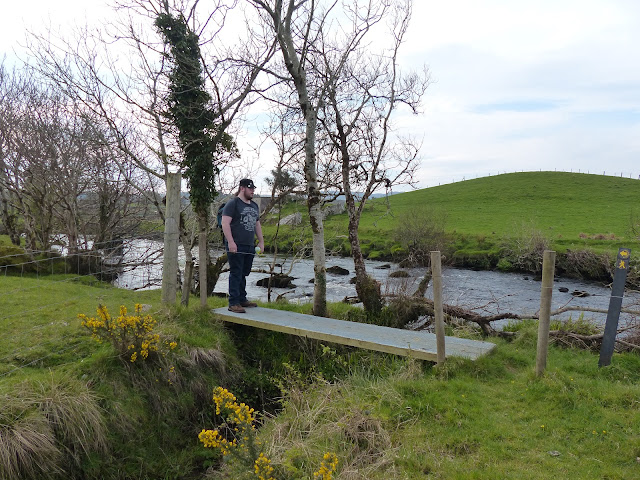 A low point came when we reached 'Numpties Corner'. This is a section of river with a bridge and is obviously accessible by road (from the other side of the bridge) and there was a lot of rubbish and a picnic bench had been vandalised. Elsewhere on the walk it had been pristine with no litter. 'Numpties Corner' is about halfway through the walk but after a short while we had got into proper wilderness again with no roads or houses in sight.We started to follow a railway line that is still intact but hasn't been in use for years. Then at last we left the river bank at a fishing spot which was a small car park, picnic bench and a locked up shed.

Unfortunately once back on the road we had two tough hills to get up and it was with relief that we finally reached a shop halfway up a steep hill on the edge of town at Ardara. 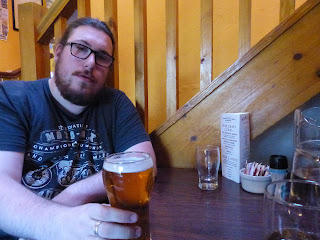 A full sugar ultra cold soft drink was amazingly good at that moment and gave us enough energy to get to the top of the hill and down the other side to Nancys Bar, where we ordered food and took a welcome seat. The downside to stopping walking is that every muscle started to seize up and it was very gingerly that we vacated our seats and hobbled out to the front where it turned out we missed our bus back to Glenties because we didn't know that it stopped outside the hotel up the road. Luckily the Taxi was reasonably priced at €12 and so that's how we made it back to the Guesthouse in one piece.

Back at the Guesthouse our intention was to shower, change and go to the Highland Hotel bar for a wind down drink. What actually happened was we promptly fell asleep. So there we were, on our holidays, and sleeping fast by 8.30pm.

The following morning went back to Ardara in the car this time and drove out past the village to Maghery Beach. There is a short walk, about a half a km, between the car park and the beach itself. The legs were wobbly, but we made it to the end of the boardwalk we were happy to find there. We found a convenient sand dune to sit on and relaxed. We did not make it further down the beach to the caves, that was asking too much of our groaning joints and so we will have to go back again. We watched other people dander over that way and decided that it wasn't for us. We then drove the Glengesh Valley which is a glacial valley. Lastly we went back to Ardara and went for a Sunday Lunch to a place aptly called 'The Ramblers Inn'. From there we drove straight home, about an hour and a half through Donegal Town. 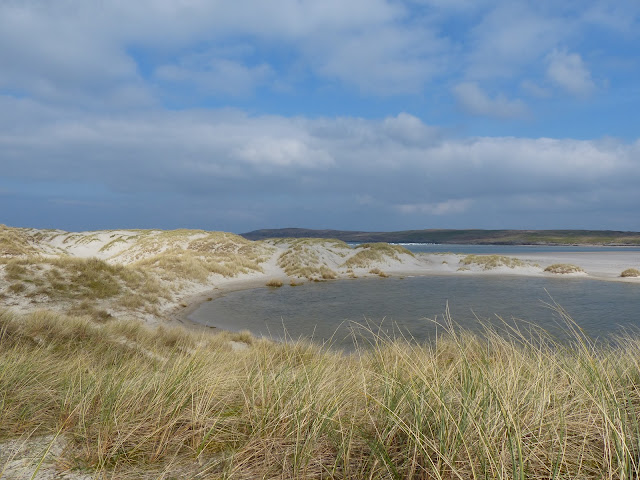 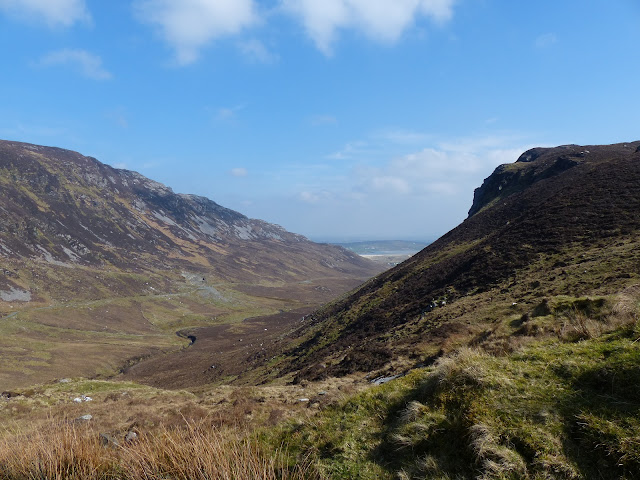 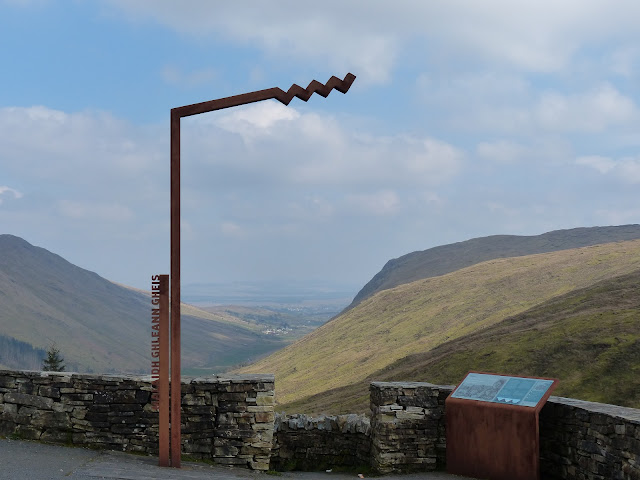 1) Fitness : this walk was beyond my current fitness level and I will need to work on that.

2) Water :  would need double the amount of water as we took 1 litre each and we both ran out.

3) Map :  I wish I'd printed off a bit of map to take with me as it would have been easier than using my phone which I couldn't see in the bright sunshine.

4) Google Maps : just because it looks flat on Google maps, that doesn't mean it is. The hills at the end of the walk into Ardara completely took me by surprise.