My first ever major road trip adventure was life as a newly single Mum with two kids, then aged 6 and 7, was when I packed the car with new camping gear and drove to France from Northern Ireland, via Rosslare on the overnight ferry. The year was 2005.

I faced a lot of criticism, people thought I was mad. But for me it was a declaration of strength, independence and reaping big rewards through rich life experiences, for the children and for myself. The planning and preparation was a big part of the excitement, as I went tent shopping for the first time, booked the ferry, figured out how to get hooked up to electricity on french campsites, and picking out destinations. The first destination was pretty easy, I wanted to revisit a much loved campsite in the grounds of a Chateau I had already been to when I was a child. Those brilliant memories was something I wanted to share with my boys and also for them to have their own cool memories too.

I decided to go in mid August and booked an overnight ferry with cabin. This in itself was a big adventure as we undertook a long drive down to Rosslare in the Republic of Ireland and boarded a big boat. The cabin was a two berth, there were three of us so the kids shared the lower bunk and I took the top. It wasn't the most comfortable journey as the cabin was dusty and my elder son is asthmatic. I didn't particularly enjoy trying to sleep on rolling seas either.

Once in France we started the 6 hour drive to the Vendee. Our destination was a place called 'Domaine de la Foret' which is now a 'Yelloh!' site. It wasn't then, although it did appear to have a tie up with Eurocamp who used to provide fully furnished tents. The previous time we visited, in 1988 when I was 14 years old, it was a fully independent site.

The experience of driving into the Chateaus courtyard, with its beautiful L shaped series of buildings housing the bar, games room, bakery and shop, was very strange. It had been such an a mythical place of my early teenager hood. To drive in and see nothing changed in the courtyard was bizarre. At the time I drove a french car and the first three letters on the registration place were OUI, which caused a chuckle with the staff  (why do you have yes written on your number plate) and also the steering wheel was, as they regarded it, on the wrong side. 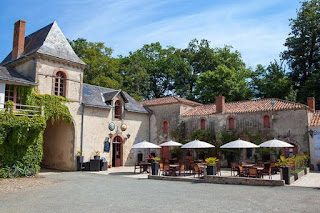 The car had been giving me some trouble on the way to the campsite, it later turned out that a fill of fuel in Ireland was probably illegal diesel, and it damaged the filter causing the car to do into economy mode and then it would barely go. It was a pretty major disaster and this issue dogged the whole of our two and a half week trip.

The funny thing was that the pitch we were directed to was right beside the pitch I'd camped on when I was younger, and it was a short walk through the trees to the courtyard and also the two swimming pools, one in front of the Chateau and one behind. The first thing I did was put the electric in and turn on the slow cooker. I used to have a slow cooker by Tefal that I got for a wedding present. It had a separate hot plate and then a non stick pot on top. The idea is that you can brown your meat and veg on the ordinary hob before putting it on the hot plate and leaving it all day. I loved it, but unfortunately the non stick coating of the pot broke down and although I got many years out of it, I no longer have it. I had brought a pork and green bean cassoulet I'd made from home which I'd frozen into a block and let it defrost in a cool box throughout our journey. I put it into the slow cooker on the ground and let it heat through while I carried out the next step, setting up camp.

After a short while the tent was up and we were eating french bread torn up and dipped into the sauce of the stew. The boys set about meeting all the other children at the campsite and in a very short time a new crew was formed. 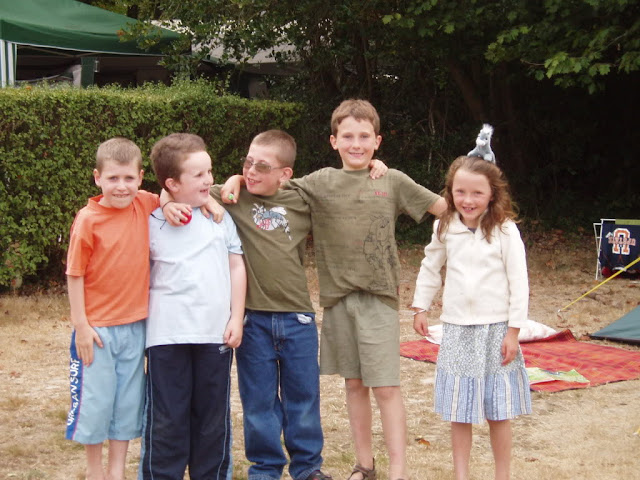 Further exploring around the site and found not a whole lot had changed since my 1988 visit. The only difference were fences were put up around the two swimming pools which spoiled the look a bit. Looking at the current photos on their website, this pool now has an overhead canopy. I remember what it was like to have just a pool sunk into the earth with only a tiled surround and no hedge between that and the Chateau. 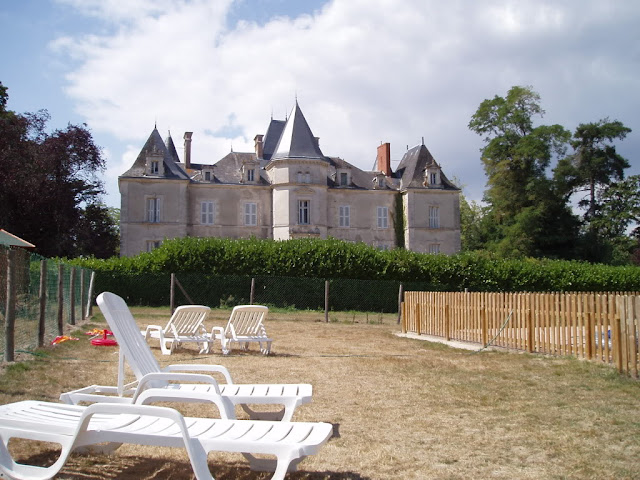 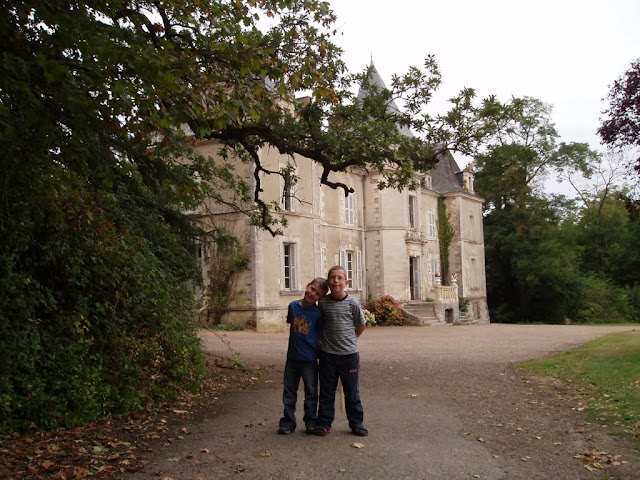 Some more pictures from around the campsite 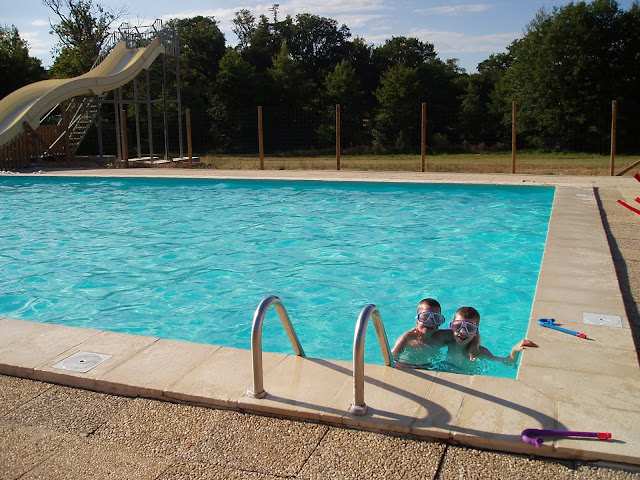 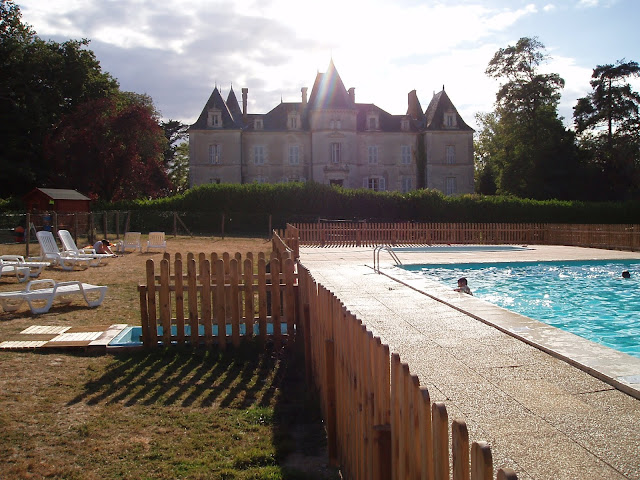 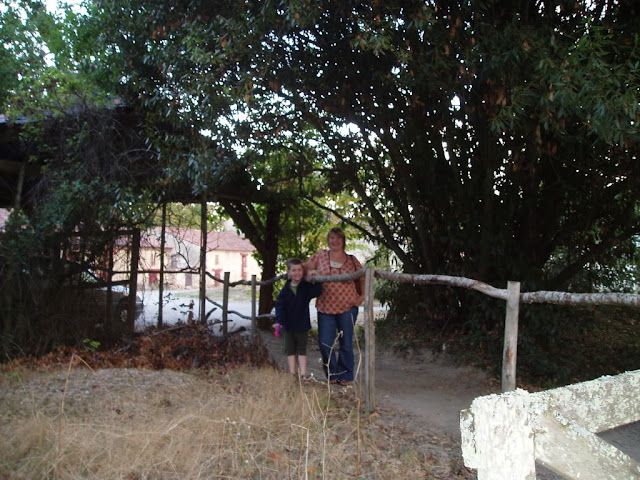 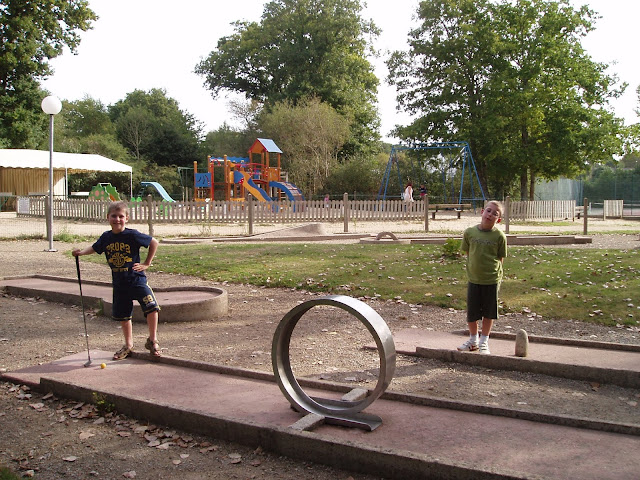 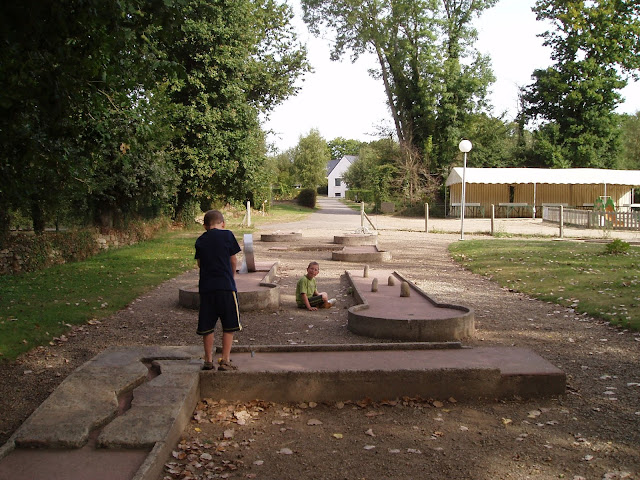 We settled into daily camp life. It was very important to me that the boys get the experience of buying fresh croissants from the campsite bakery every morning so that they could learn about money and a bit of independence and it was with great excitement that they carried out this task every morning. We explored the region every day too. One day we went on a boat trip around the nearest bay, another we went to a very exciting beach that had an island off shore where there was a secret underwater path that led out to it. 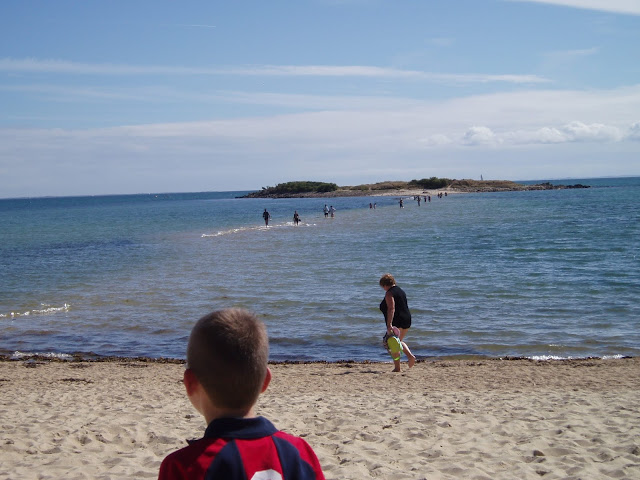 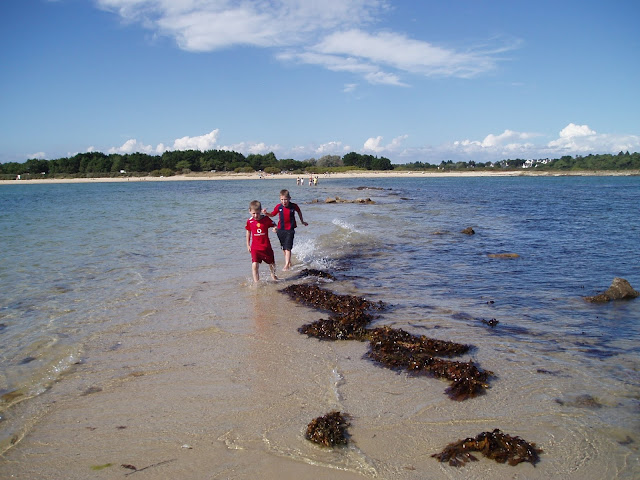 A real highlight and one of the best experiences was going to a french theme park called Puy du Fou. It's very hard to describe what Puy du Fou is, there are various different zones with periods of history represented. There was a viking section, where you watched a show of a scene with actors, carried out completely in french. There is clearly a bit of a love story going on, but the Cheiftan clearly does not approve of his daughters choice of lover. So a battle ensues and a viking ship pops up out of the water, with actors already on board. The battle concludes with the good guys winning and everybody lives happily ever after. 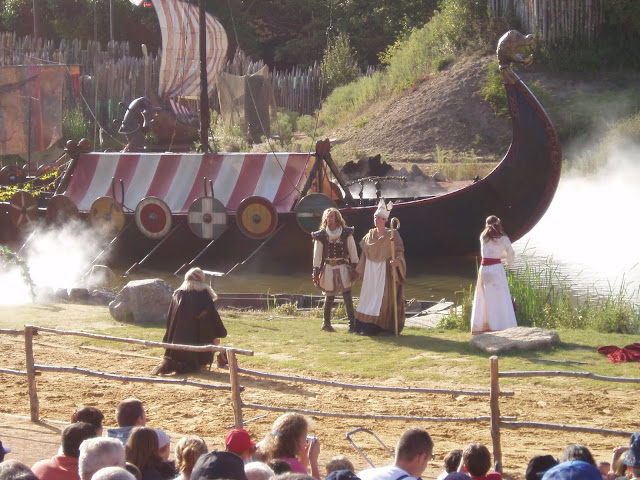 Next was a Roman Colusseum complete with Christians being threatened with Lions, Chariot Races and a parade showing all the animals the Romans would have boasted about having. 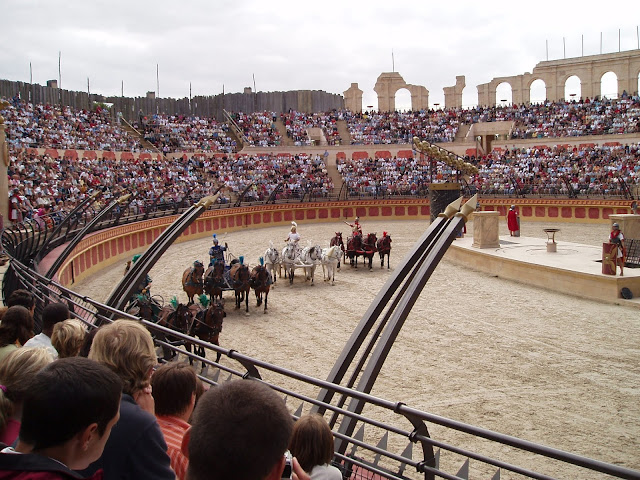 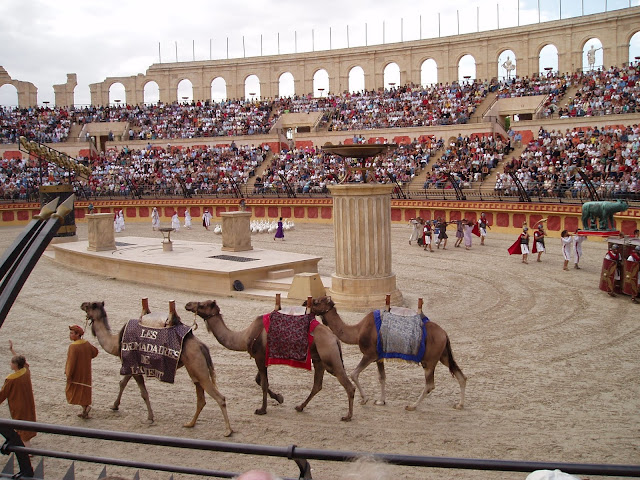 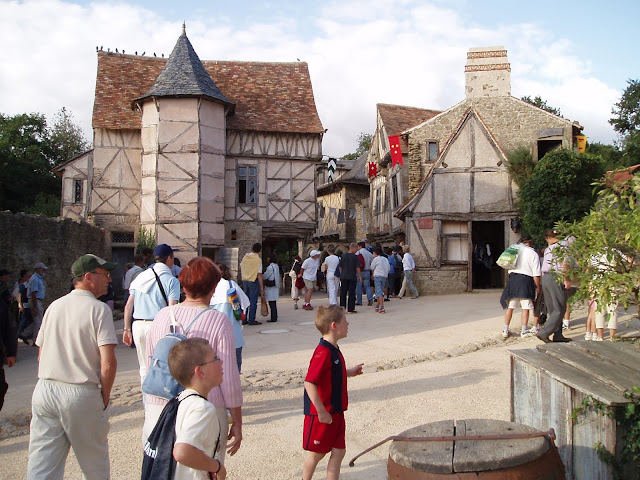 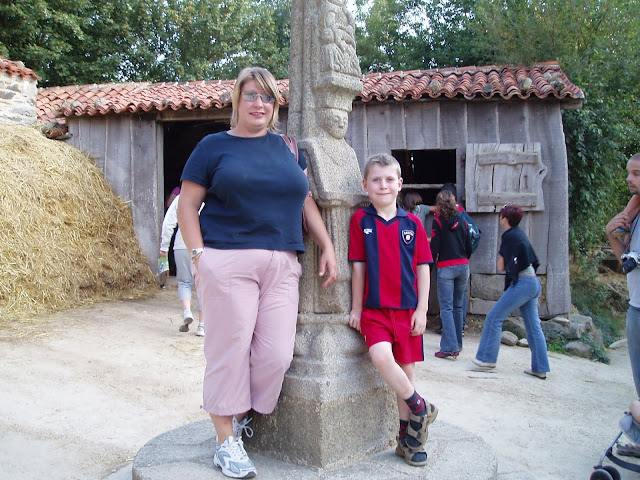 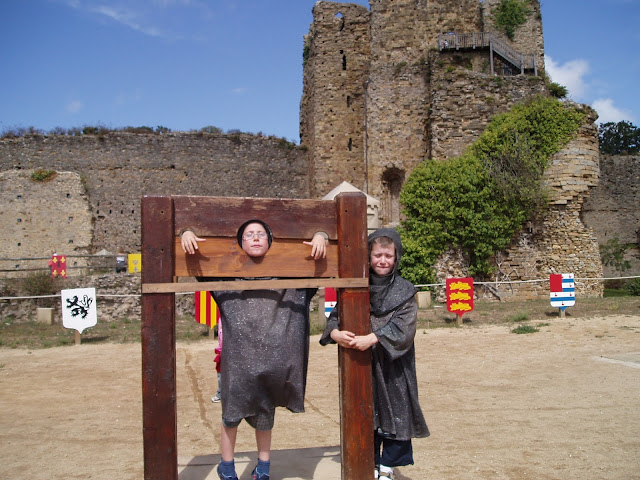 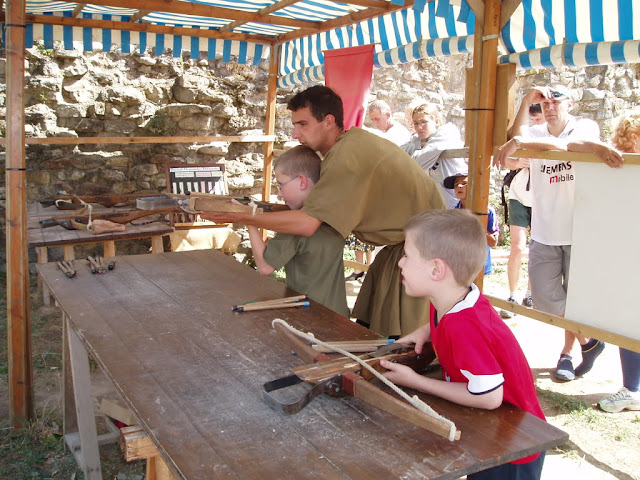 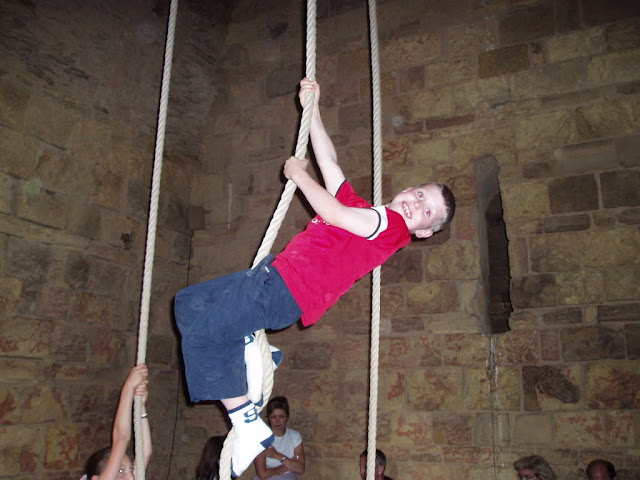 One of the great joys of taking a road trip is trying local restaurants, buying food from a supermarket, and finding a filling station with my sons name on it. We even found an Irish Pub! 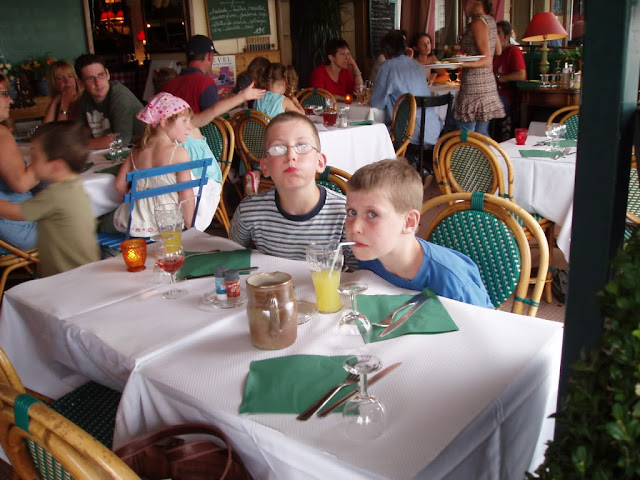 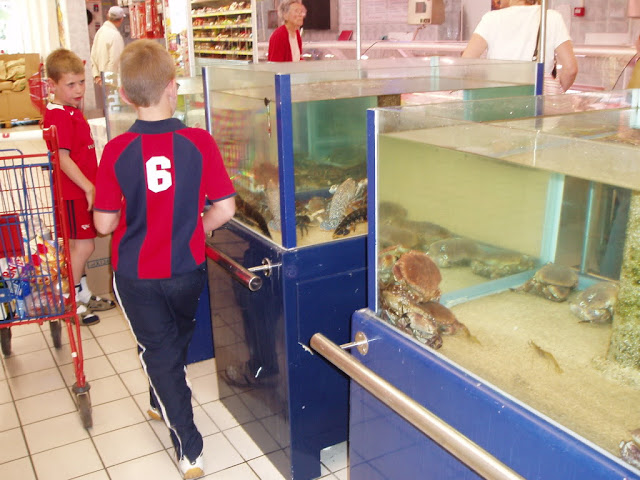 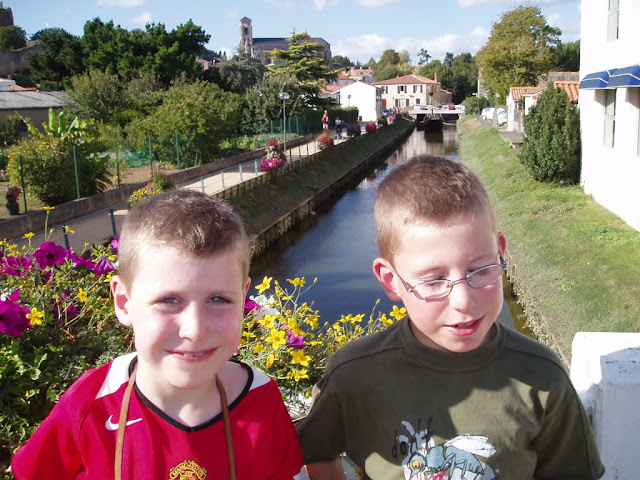 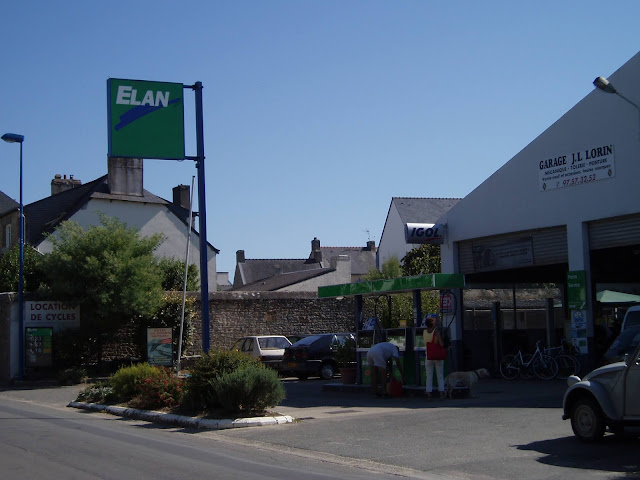 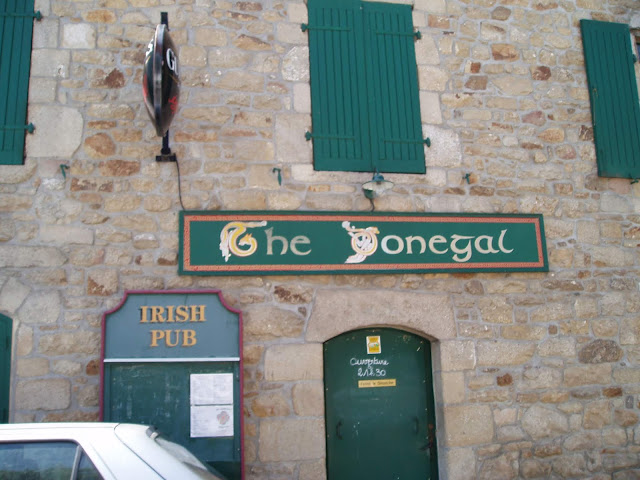 We stayed in the Vendee for about a week and then moved on to another two sites, the first of which we didn't like so we only stayed one night. The car continued to give trouble and I could only drive it a short time before I had to stop at the side of the road. I decided to go further north so that we would be closer to the ferry home. In the end the car was transported all the way home on a low loader. I will reveal all in Part 2.
Posted by Campervic at 14:44