What a brilliant trip! I learnt however that no matter how comprehensive my list was, it didn't include ear plugs (for noisy neighbours) and a football. I learnt that my new bells and whistles double height airbed just about fits into the sleeping pod lengthways and no more! The new Intex air bed was comfortable, but took a little bit of jiggling around. The first night it wasn't firm enough, the second a little too firm. I must take a 'reading' of how many minutes and seconds it takes to inflate to get it just right, and write it down somewhere. I didn't feel any cold from under the airbed as I usually do, but then this one is so much farther off the ground, and also I had a roll mat underneath.

The first night I put my air bed, and the boys two 75cm ones into the sleeping pod, with the dividing curtain separating them from me. We all had roll mats underneath, and there was a picnic blanket down as a 'carpet'. Elan quickly figured out that he didn't like having his camping gaz airbed covered with a bedsheet, as it made it too slippy with his sleeping bag. Cormac did like the sheet, so they had their airbeds the way it suited them. The pod was pretty much filled up by all of this, the two airbeds had a 5 cm walkway between them, and I had a narrow strip too where I put the clothes bag.

Elan slept in the Teen Tent the 2nd night, and our sleeping pod looked much better. I got rid of the dividing curtain, I put the rug right in the centre with edges tucked under the airbeds, and it was more airy, comfortable and I swear I slept better and warmer! Elan seemed to get on fine that night, he didn't have any problems with cold or the wet leeching through except the next day when a little Westie came along and cocked the leg on the corner. When we left he packed his little tent away by himself which for a pop up tent is a challenge in itself!

Verdict on using picnic blankets instead of a tent carpet

I didn't really like having the picnic rugs as carpet in the main tent. I did like having a carpet, it really was an asset, but having separate rugs didn't really work out. They kept getting rucked up and it's not really practical to keep dog and kids out - it's not a show tent we have to actually use it. I put an eco mat over the joins but that just created more rucking. I think there's no substitue for an actual made to fit carpet. The only positive side to having separate rugs was that it was easy to lift one and shake all the new mown grass off it. You couldn't do that with a carpet.

We had noisy neighbours on our first night. A couple and their two small children in their 'Halfords Special' and obviously not hardened campers. The Mum arrived over to me after dark looking for large batteries for her camp light, but although I do carry spares for my own lights I didn't have the correct size for hers so I lent them my spare UFO light. I was amazed and horrified to see she'd been using her cigarette lighter up until that point - naked flame, in a poly tent! No way!

Anyway most of the noise came from their baby, who screamed like a Banshee from 3am onwards. On three different occasions they turned the ignition on their car and kept it running for about 20 or 30 minutes, probably to warm themselves and the baby. In fairness I recognise that babies do make noise and I would never hold that against anyone, but that was hard to bear in mind when I didn't get much sleep. The problem for me (as well as them) was the cold which I probably wouldn't have noticed much if I'd slept through it.

They were to stay until Sunday, but I wasn't much surprised when I woke up about 9 on Saturday morning and they were gone. I was saddened that being so ill equipped will probably put them off camping for life. When they talk about camping, they'll relate the horror story of their terrible night without the basic realisation that they had a bad experience because they weren't prepared.

Camping with dog was more successful than ever we've tried. I think the crate was an invaluable piece of kit which was well worth the packing space. I was able to contain her when we were sleeping rather than have her raiding the kitchen bag and spreading dog hair all over the tent. I was able to control her when Mum and Dad came round so she wasn't (as much) of a nuisance. In the evening she nodded off rather than being on high alert (I'm so impressed with this I'm keeping the crate in the living room!). It was a pleasure to have the dog with us. I think a successful camping trip is evident when I've got a younger (and of the two, more reluctant) son who says on the way out, Mum can we do this every weekend! I really enjoyed getting away, especially seeing family who all came to admire the new tent and see how we were. My sister took us for a walk around an amazing and for me, previously undiscovered piece of coast line, which took us eventually to Portbradden and the smallest church in Ireland, St Gobbans.

We really enjoyed our first camping trip of the season, and it's actually the earliest in the season we've ever gone camping. On this occasion I didn't have the patience to wait, and with the advice from UKCS forum I felt better prepared for the colder nights. I just wanted to say a big thanks to Mum and Dad for the new football and the scones and doughnuts! 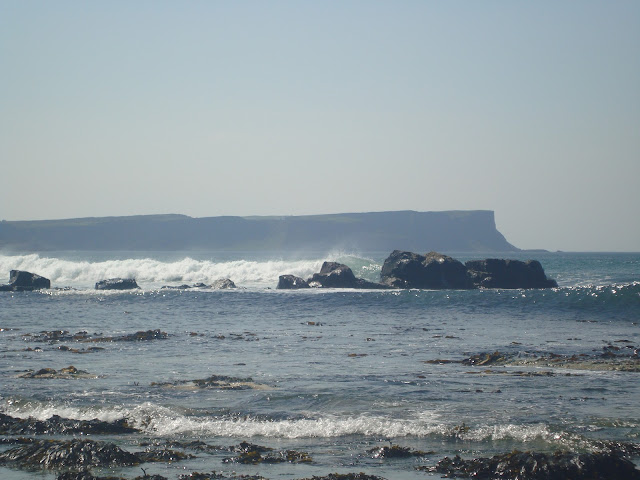