I'm having too much fun writing this blog now, especially now I've got the hang of posting pictures! Expect a lot more as I go into tent withdrawal mode.

The rest of our holiday was spent visiting new places and finding new beaches. We spent some time exploring Valentia Island, which is accessed across a bridge from the fishing village of Portmagee, about 10 miles south from the campsite.

Valentia Island is 11 miles long and 3 miles wide, and has a permanent population of 650. It has a principle town called Knightstown, and a smaller settlement called Chapeltown. When you drive over the bridge from Portmagee, you turn right to go to Knightstown. From there a short Ferry can be caught back to the mainland, a point close to the campsite again. So in this way is a circuitous drive and a very scenic one at that. The Ferry is good value at six Euro, although it lasts for about 5 minutes before you cross the channel to the mainland again. 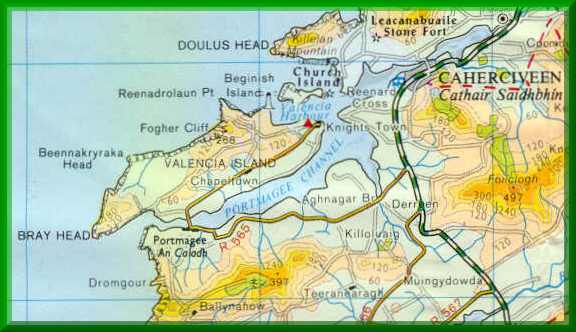 Valentia Island is noted most famously for being the eastern terminus for the Transatlantic Telegraph Cable. The first official message was passed from Queen Victoria to the then President of the United States on the 16th of August 1858. The short message took 20 minutes to transmit.
Knightsbridge is therefore a Victorian town, quite out of place in this part of rural Ireland. It was a community dedicated to the cable and provided housing, schooling and worship in the Church of Ireland church at the head of the town.
Valentia Island, indeed the surrounding coast on the mainland, is full of slate. There is a slate quarry on Valentia Island itself, still being worked. It is on the tourist trail because of a religious grotto that is set up in the entrance, and of course the surrounding views are outstanding. 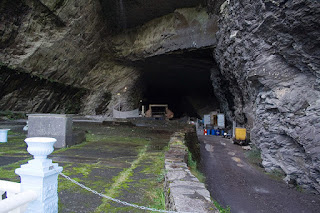 And of course Valentia Island has views, in abundance. Here's a selection of them....

We also had a couple of days out at the beach. We found a few different beaches but our favourite was Derrynane Beach, about 20 miles south of the campsite. Just off the coast is 'Abbey Island' with a ruin of a church and the remains of a graveyard all around it. We went midweek and virtually had the place to ourselves. The day was overcast but the temperatures were mild so we decided a swim was in order. But the sea is blummin' cold and it would take a hardier soul than me to go anything more than waist deep, and I think I did well to go that deep!

Other highlights of the holiday was visiting the two stone forts which are very close to the village of Caherciveen. They have been partially reconstructed, but the inner sections of each fort are the remains of a Roundhouse and each dated from 500BC. These are incredibly ancient settlements, fortified, and with steps up the inside of the fortifications so that they could see over the top.