It was the main holiday, the 'big' trip which is a fortnight in mid-July when the camping planets align and I can take up to two weeks away.

This year it was decided that it would be a family trip, that is myself in my Bell Tent and my parents in their touring Caravan. It was the first time I went on holiday with my parents since I was a teenager.

Mum and Dad had always fancied going to Belleek Campsite in Ballina, Co Mayo, they had heard great things about the campsite and so about two weeks before hand we booked and paid a deposit. It turned out that the town festival was on and they needed a bigger deposit than they usually require, €25 each on a credit card, which was fine we didn't mind.

We arrived separately, I was working that day mopping up last minute jobs and so didn't get to leave home until lunchtime. They had already left their home first thing. I drove down Glencar Valley to Sligo then down the main road that would eventually take you to Galway. I missed a turn off and the sat nav brought me past Lough Talt which although probably wasn't as good a road, it was very scenic.

When I got to Ballina I was surprised at how big it is. It is a large town with a one way system and I had been primed in advance by parents not to go through it (they learnt the hard way). The best way to the campsite is when you get to a sign saying 'Belleek Castle and Woods' follow that, which will take you through a large stone arch and then go past the Castle entrance as the campsite is only half a mile or so onwards.

My first impression of the campsite as I drove in is that it is really well laid out, you drive through an avenue with a row of statics on the left, go straight on and then roads branch off disappearing behind mature trees and hedges. The campsite road is a loop with offshoots, and it gives the site a very non linear feel with lots of privacy between parts of the site. The pitches are generous, and there were units of all types mixed in with each other which I like to see. Nothing worse in my view than a row of regimented white boxes, I'd far rather see campervans mixed with caravans, tents and motorhomes. 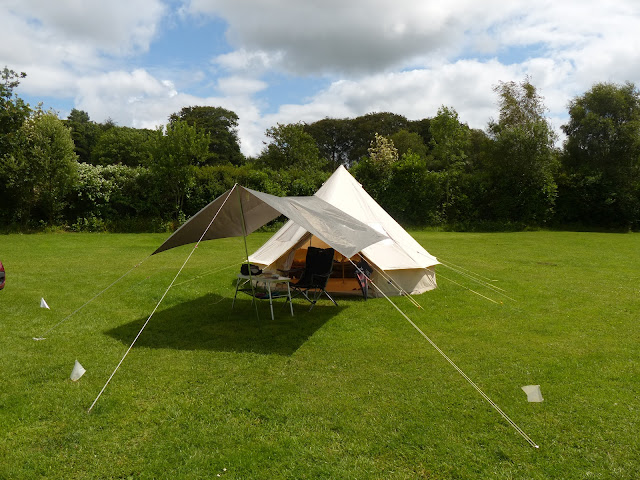 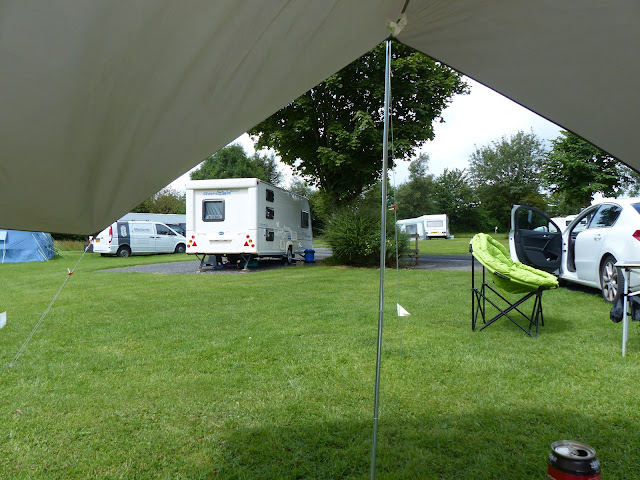 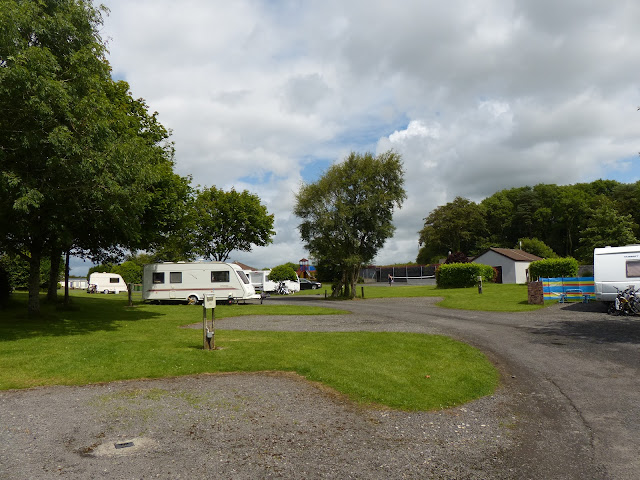 Our pitch (our caravan and tent were put together) was on the edge of a tent area that appeared to be used for family tents. I was on the outer edge of it beside Mum and Dads caravan which was on a hard standing. It was right beside the water supply which was handy for them as they could stretch the hose across every morning for a fill. It was also a 30 second dander though the trees to the amenity block. 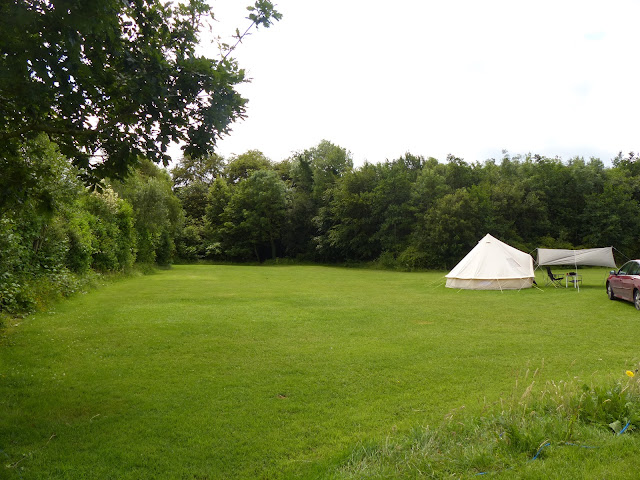 The loos were a bit dated but very clean, and three showers in the ladies and presumably in the mens too. I found two extra showers around the corner which had external doors and were unisex. I actually preferred them as there was a bit more room. The tokens for the showers are €1 from reception. In my time there (we stayed a week) I used the laundry and it cost €4 for a wash and I think it was another €2 for a certain length of drying. There was a choice of short amount of drying or long amount but I decided to use the shorter time and then put everything over the back of chairs at the tent. The amenity block has a washing line round the back too but no pegs are supplied so bring your own. 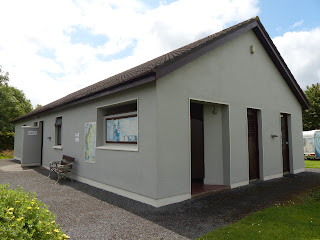 The campsite has a great campers kitchen with two sets of dining tables and chairs and two washing up sinks inside. Then just outside there are another two washing up sinks under a shelter. Beside this is some picnic tables under a large shelter and then a recycling zone enclosed inside a fenced off area. I found that this area was the best area to meet new people and find out about where people were from etc. I really enjoy the social side of camping and this is were the craic is - bonding over dishes.

In our first few days there as previously mentioned the town festival was on. The first night we went for a walk in the town centre and it was really atmospheric with music on stage in the main street and lots of people watching to do.

The second evening there was a fantastic fireworks over the river. One of the biggest employers in the area is the Coca Cola factory and I was told that they sponsored the fireworks. The certainly splashed the cash for the display. It was very late because being summer it gets truly dark quite late. So it was 11.30pm before they started but it was such a busy crowd that we got our spot on the bridge at 10pm and waited an hour and a half. It really was worth it.

We enjoyed going to Belleek Castle which was near the campsite and is a hotel. The castle has a lovely little lunch spot which is quite trendy with live edge wood tables, bean bags in the courtyard and a menu which is quite reasonable. A filling, thick vegetable soup with really good heavy brown bread, a bit like wheaten bread, was €5.90.

Belleek Castle also has a tour of some of the rooms which are non accommodation rooms. This includes the areas where the weddings are held and also some rooms which collections of various objects like armour and fossils and furniture and maps. The castle was owned most recently by a great collector of things, and so the house which is warren of interesting things to look at.

The other thing we spent our week doing was going to nearby Enniscrone which has a really good beach for swimming. It was very hot weather during our week away and so a dip was called for and very welcome. Mum and I went for a swim while Dad rested his eyes in the car.

We also visited the nearby Rosserk Abbey and also the little fishing village of Killala.


At the end of the week Mum and Dad left for home and I went on to Cong which is south of Ballina. I stayed at 'The Quiet Man' campsite but ended up with a rowdy crowd in three large tents beside me. I explored the area on foot, walking to Cong and around the golf club area of Ashford Castle. I would have gone into the grounds of Ashford Castle but it was €15 per person and all I wanted to do was walk beside the river back to Cong in a circular route. I decided to go the long way instead. I did get a good picture of Ashford Castle across the river.

I could have stayed away longer but between the neighbours and incoming bad weather I decided to go home, calling into Drumcliff to look at Yeats grave and the round tower, and having lunch at the nearby Yeats Country Inn. I spent the next week chilling out at home and enjoying having time to cook proper meals and sleep in and watch Homes under the Hammer before going back to work well rested and glad of a break.