Yes siree I did the unthinkable, I stayed in a caravan. Not mine, my parents who went away in it for a fortnight but couldn't stay the weekend in between so I got the use of it. It was in a new site to us, called Causeway Coast and it is right beside Juniper Hill about halfway between Portrush and Portstewart on the North Coast of Northern Ireland.

No photos of the caravan but I can say that it was a bit weird. I arrived about 8pm on Friday past, and I sat on my own in the caravan and thought 'what now?'. When I'm camping I have a tent to set up, water to fetch, bed to blow up, and a sleeping bag to fluff. So I got back in the car and went for a drive around Portstewart which was a big mistake because Portstewart has got crazy traffic. 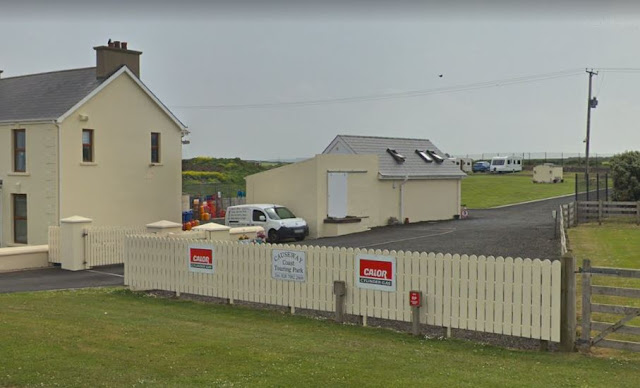 The following day my good friend Violet came to stay and that kept us occupied, walking into Portrush, walking around the shops and going for a meal in an Indian Restaurant. Back at the caravan I introduced her to Scrabble, I find it hard to believe that there are people in this world who have never played scrabble. We do try and live the Rock 'n' roll life! I brought three bottles of beer and forgot to drink it.

Late afternoon the next day I'd found my groove - I also found a good book and a comfy Moon Chair that I took into the harbour in Portstewart and did a combination of reading and people watching. At tea time Mum and Dad arrived to take over at the caravan and we all went out for a meal to Amicis which is in the old Golf Club in Portstewart. It was one of the best meals I've had in years, very tasty, fresh ingredients and really well presented. Not a bad quick weekend away and very civilized in a caravan and I could get spoilt with it.

A nice little park with a railway line running behind. I actually quite enjoyed the train going past, it was not noisy or invasive. It has views over the sea and is very handy to both Portrush and Portstewart. Into Portrush it is around about a two mile walk and it is all downhill. The problem is it's all uphill on the way back!

The touring park allows tents as well as caravans and motorhomes. There is quite a steep slope on the site and so if in a campervan or motorhome levellers are definitely required. The caravan stays have some adjustment but some wood was still needed to make the caravan level. At the bottom of the grass area in the middle of the looped road it would be flat enough to pitch a tent.

The campsite toilets are spotless and the owners have put a little information table with local leaflets etc just inside the door of the ladies, and I'm guessing the same in the guys loos as well. The only negative is that there is no dishwashing area which is a real pity because that's where you meet other people. I didn't really get chatting to anyone and when Mum and Dad arrived we also got told off for having two cars at the caravan temporarily while we were swapping over residency. I'm guessing you don't mess with the lady who runs the site but then again there's probably never any issue with night time noise.

I would go again though, it's a good base for the area.
Posted by Campervic at 23:54