A One-nighter in North Donegal

In the past fortnight I have managed to aquire another tent. It is a Vango Halo which is a three man backpacker (sort of) it's really too heavy for true backpacking but for a light, throw up car camping tent it is ideal. More on my Vango Halo (300) to follow, for on this occasion I couldn't help myself but use the Bell Tent again.

I have a friend who is a biker. This guy and his friends all have a motorbike each and they go on these little road trips. I knew this in advance, knew where they were going to be and decided that I would take a run their way for the craic - well they had asked me, which was lovely of them.  As their location was an hour away I thought of just heading up for a few hours for a bite to eat but when my eldest son (aged 18) expressed interest in going too I thought why not stay over!

The site is a bit special, and a secret. I'm not saying anything more than North Donegal. It's on the coast in a bay where you can see mountains across the bay. There's a good reason for keeping this place quiet, the bit of land that is used for camping is not a designated campsite as such and there are complaining neighbours - so the current land owner might get the 'order of the boot' if the council come crashing down on him. However, while this site is still available it is well used. It has absolutely no facilities but there are public toilets within a minutes wander. There is a pub in front of the site and you can use their facilities and they also offer a bar menu. So it's good manners to support the pub with a pint and a pizza if you are going to be popping in and out of their loos.

Note: You may figure out for yourself where this secret place is, but if you are knowledgeable enough to know, then you deserve to know and I trust you not to blab about it either.

Now I'm a girl who's golden time of music was a certain era. When Bon Jovi, Aerosmith and Guns & Roses blasted out guitar riffs and spectacular as their hair and makeup wasn't just for girls. And so it was that my son has been brought up on this stuff, and guess what - he's a fan! Big time, he even has long hair and plays guitar. He does not wear eyeliner though.

My playlist was loaded and ready to go. It was entitled 'Road Trip'. The weather was stunning. 21 degrees (in April) and not a cloud in the sky. I felt a bit like that girl from the Aerosmith video Cryin' and I was breaking out, disappearing in to the far blue yonder all shiny blond hair and aviator sunglasses. The music was on extra loud, and the windows were down. The both of us sang the whole way. For once in my life I really started to relax, and I my frown was turned upside down.

The Bell Tent practically pitched itself. The other guys were already camped, but there was no sign of them or their bikes. They had a variety of dome tents and one was a Halo as well so at least I got to look at one. Just as I was getting water boiled for a coffee I said to my son that we'll hear those guys before we see them. And funny enough - the loud rumble of big motorbikes, across the bay to a road we could see. We counted as they appeared and within another minute they were with us on the campsite.

I'd met three out of the four of them before, and so introductions were made and we all got on really well. The guys had brought themselves a picnic table over from another part of the site and we were quite content sitting there, soaking up the rays and drinking red wine out of a plastic mug.

Things were so relaxed and there was no pressure to do anything or go anywhere. In the end we split up for tea and met up again in the bar. I was on half un's of Guiness all night and the bar was busy with a great atmostphere. They have a really cool beer garden, but all that cloudless sky translated into a nippy evening and there was a turf fire in the bar so we stayed in.

The Bell Tent was very basic in it's set up, you can really bling these things up but all I took was a self inflating mat each, a big 35l 'really useful' box with  all the bits and pieces we wanted like mugs and torches. I took one small camping chair and a fold up bench as well. I brought a table but didn't use it. 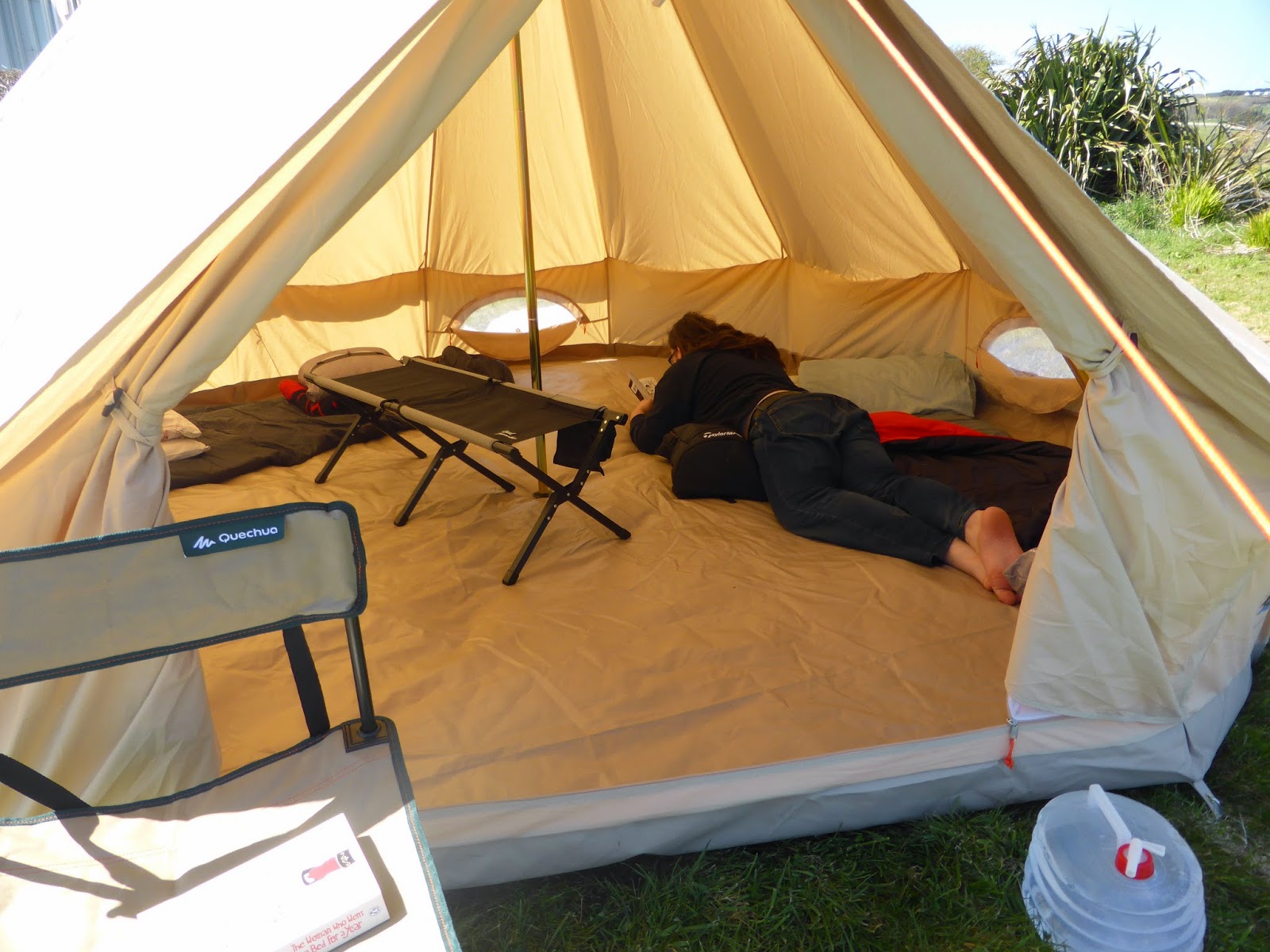 We had no source of heat, and so I took extra sleeping bags. The night was terribly cold, I ended up sleeping inside a sleeping bag inside another sleeping bag. I didn't sleep that well, I probably should have drank a lot more Guinness. My pillows kept slipping off the top of my self inflating mat which really got on my nerves. I've been googling this all week and it seems I'm not the only one complaining of pillows slipping. Various workarounds are mentioned, such as putting your t-shirt over the pillow and over the whole end of the mat. Anyway I ended up putting the chair on it's side and butting it up against the top of my pillows, and managed a few hours sleep after that.

I was up at 6am answering the call of nature and just happened on the moment the sun came up. It was so spectacular I crossed my legs and went back to the tent for the camera. 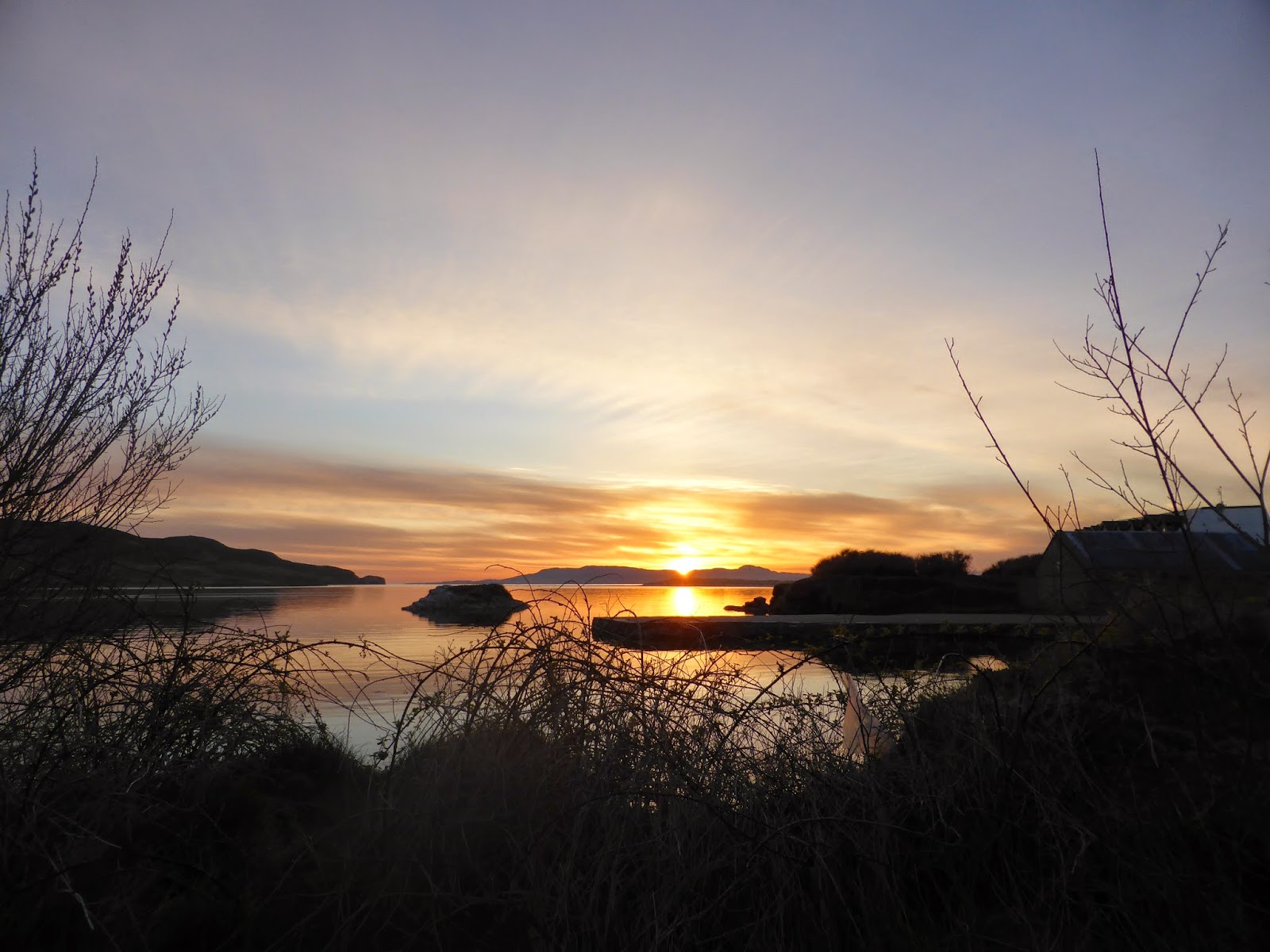 The following day there was no pressure to be up, or to leave. I was up about 8 am and over to a nearby shop for a coffee and took it to the sea front for a half hour stare at the sea. I could see the guys emerging from their tents over at the campsite. I wandered over their way. I made coffee. My son woke up. We went to the cafe for a wonderful breakfast of french toast served with bacon, maple syrup and a dollop of blueberry yogurt on the side, for €7 (about £5) and then went back to the campsite. Two more bikers had turned up late the evening before, so we all introduced ourselves and had a good chinwag and then they all started to pack. I'd no intention of packing, so waved goodbye to all the men and went for a drive. We drove to the top of a mountain where you have views of the sea all around, and I filled out my sons Student Finance form as this was the only spare bit of time I'd had in weeks. I got burnt sitting in the sun and we drove back to pack the tent. I think we got cleared up about 4pm and we put the music on full blast and drove home, completely refreshed, chilled and still feeling like I was in a 90's rock ballad music video.


I'm warming to the Bell Tent. The low door didn't annoy me as much and I wasn't bothered by the main guy rope coming from the centre of the door as much as the last time. I got it packed away completely dry and it was quite easy to get inside it's bag once I used the pole bag to really compact it down. I think I'll keep it.