An overnighter in Adare

My son and I were taking our main holiday, 2 weeks in mid July, in Mannix Point in Co. Kerry where we as a family have been twice before. My other son was working and was staying at home with a Grandmother nearby.

To break up the long journey we decided to  stop over at Adare Camping which was on the route to Mannix Point. We took a road down the Western side of Ireland, a road that has seen vast improvements due to heavy investment by the Irish Government with the aid of European Funding. And so it was that we took a stretching legs break at Knock which is an ancient pilgrimage site for Roman Catholics from all over the world, with a huge Basilica and well kept Chapels and ornamental gardens. 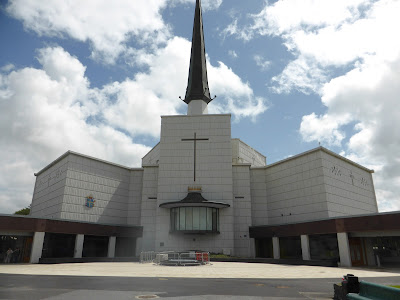 The interest for me was more of interest rather than a pilgrimage and it was good to get out of the car after a two and a half hour drive. I found the buildings architecturally interesting and loved the art work in the windows. 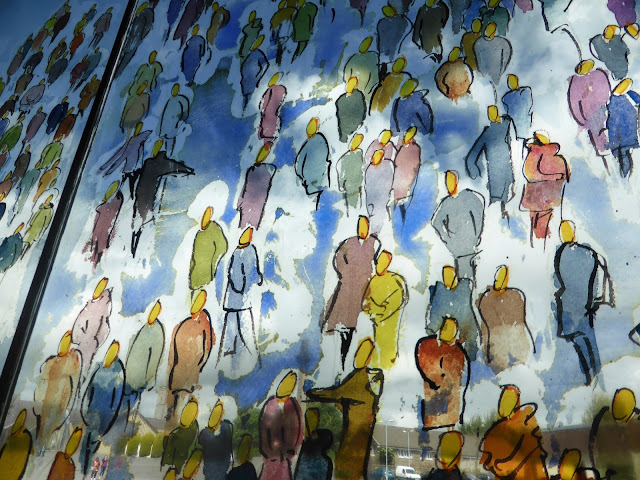 The campsite in Adare was another two and a half hours drive on and the roads were either motorway, dual carriageways or very good surfaced, wide roads with climbing lanes. There was no impediment and even though we apparently passed the cities of Galway and Limerick we didn't so much as see them, sailing round them whilst negotiating a few roundabouts.

The first time we had to sit in traffic was at Adare itself, being a few miles south of Limerick. The village is very pretty, having been the village built around a large estate and the houses are mainly thatched cottages. The reason for the traffic was apparently people like to do a lot of rubbernecking whilst going through Adare and also being a busy village it's just a bottleneck for all traffic going further south. 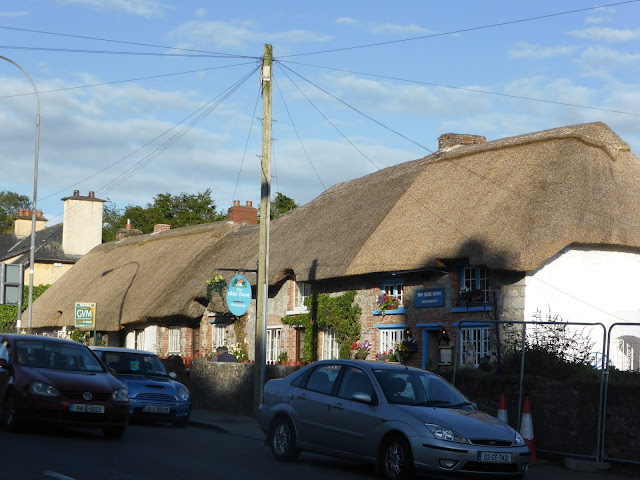 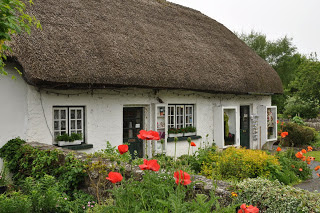 A mile or so past the village, turn left, turn left again and there is Adare Campsite. It is a lovely, small to medium sized campsite in tranquil countryside. The site is well tended, the grass short and the hedges trimmed. The owner, Hugh, charged me €10 each which I thought was a little on the steep side for what is in effect, a backpackers tent. I could have argued backpackers rate but it wasn't worth getting the owners back up.

We had brought a Vango Halo tent which is a tent popular with bikers and backpackers because of it's small and lightweight pack size. It was the first time we pitched it and there was a little bit of scratching of heads as it is a geodesic tent (i.e. crossing poles) with an inner you have to attach from the inside. I have left the inner attached now and will probably not detach it again unless I really have to. The inner tent is orange and the fly is green and this tent is unique in that it has doors which are designed to be opened within one arm movement in an arc. There are one of these doors on each side so two people get their own door and this also aids cross ventilation for when the sun beats down and heats it up inside. It is also tall enough to sit up in cross legged and there is storage space for boots and bags etc outside the inner but under the protection of the fly sheet. I was seriously impressed how roomy it was inside.

We had brought tea with us, bagels which we toasted and slathered with philidelphia cream cheese and smoked salmon. We were able to use the campers kitchen which in this case is a large tin shed, with a wood burning stove and a picnic table. Around two of the the sides are worktop and there is a kettle and somewhere to plug in your phone to recharge. There is a sink with running water. It is quite basic but more than adequate and you could feasibly take shelter in there in the rain.

There are a couple of dishwashing sinks on the main amenity block which are under a roofed area and the loos were spotless, and the cubicles roomy enough to get changed in. I normally don't change in toilet cubicles but this time, being in such a small tent I was glad of the space and also how clean it was.

We went in to Adare village later for a walk around and admire how pretty the village is kept. There was one burnt out cottage which Iv'e been informed since was due to an electrical fire and I'm also told it will be sorted out ASAP as it is a blot to the look of the village.

Here's some pictures of the campsite: 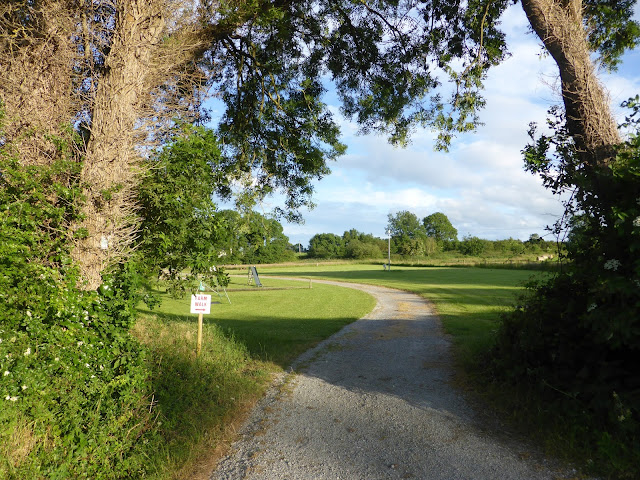