How this started was, well there was someone on an online forum who was totally new to camping and was being dangerously seduced by Bell Tents, I'll tell you this....Instagram has an awful lot to answer for.

As I'm now the owner of a Bell Tent, I can now see beyond the appeal of prettying it up. Bell Tent camping is a whole other experience from other tent camping.

How can I put it, well....in a tunnel tent or family tent you are looking for some sane things. Like somewhere to stand upright and a designated sleeping area that you can close off 1) the sight of messed up beds and 2) keep the bugs especially spiders out.

Bell Tent camping is much more romantic. The bed is always on view as is pretty much everything else especially if you have kids and you are sort of supposed to embrace the bohemian lifestyle of 'lounging' and if you are even slightly a clean freak this will drive you nuts. How can you sit on a bed and not mess it up! The door is too low resulting in an aching back and I'm quite frankly, the wrong shape for floundering on the floor as I cannot get back up again without using the central pole. And even then, I'd need a rope with knots in it.

Bell Tent facebook pages are full of the most amazing photos, but the fans of them admit themselves the photo was taken at the beginning of their trip, after the shoozing it up but before a single being was let in there.

I pointed out to this young family (I know it's taken a while to get back to the original request for advice) that you don't necessarily need a Bell Tent to glamp, that old fashioned Frame Tents are retro now and all the rage.

They offer benefits like you can stand up all over the internal space. There is a normal walk in height door. The seventies and beyond offered some questionable if not funky colour choices. These wacky tents can be festooned with bunting and filled with cushions just as easily as a Bell Tent.  I went on to ebay to pick out a 'smallish' Frame Tent to illustrate my point and found a lovely little Buttermilk Yellow and Royal Blue one. It was £55. The seller was happy for people to arrange courier should they so wish.

I kept refreshing the ebay page and the forum post page and the tent which was on a 'Buy it now' was still there. I thought the couple were bound to buy it, it was a no brainer.  The tent got in to my head. I kept thinking about all my arguements why a Frame Tent was better and just as pretty as a Bell Tent. I hoped they wouldn't buy the tent.

I did a quick courier search thinking the cost will be prohibitive. Nope...it's was about £30. £85 all in.

I thought some more, sure haven't I always wanted a more manageable size of a Frame Tent rather than my big brute of a Frame Tent? (Actually said this about the Bell Tent too, even I can't fool myself all the time).  I'm going to be a solo camper from now on. I can use the bedroom pod without it's divider. I actually prefer no groundsheet in the living area it's better for eating and cooking (so I told myself) and between one thing and another....

I argued with myself and I won.

John, the owner was incredibly easy to deal with and kept communication throughout the process. A dozen messages between us, Yodel organised over the internet and paid for online. I'm now the owner of a Sunncamp Villa 4 with two huge windows and more importantly, it's in great condition. It actually dates from the 90's so it isn't really that old.

I've never named a tent. Well the Vango Icarus got Iccy but that's just laziness. I don't know why but I think this one needs a name. Any suggestions gratefully recieved.

To the original couple who I advised, your loss is my gain. Thank you for choosing a Bell Tent. 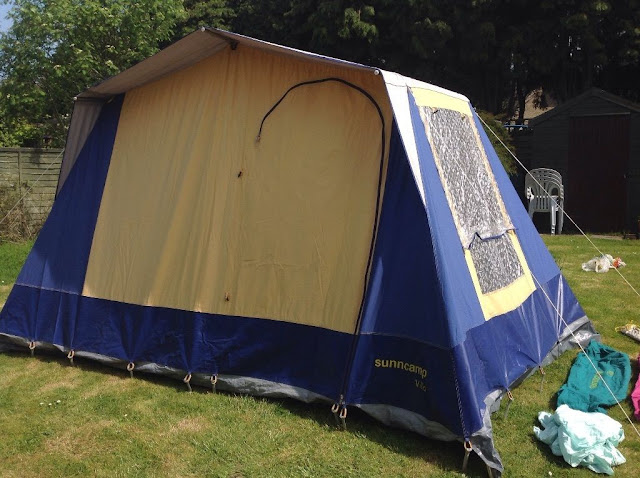 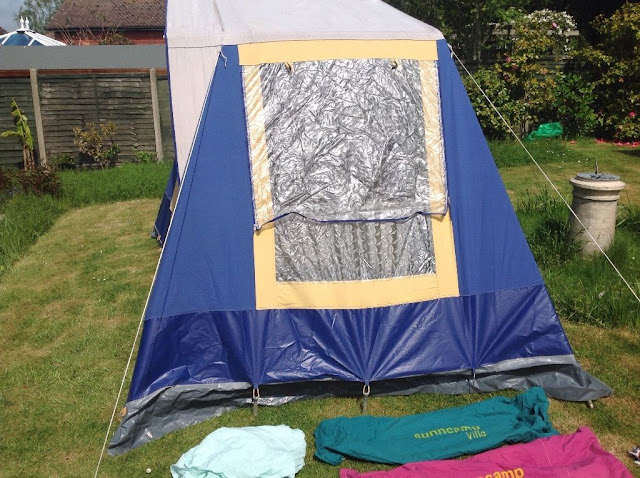 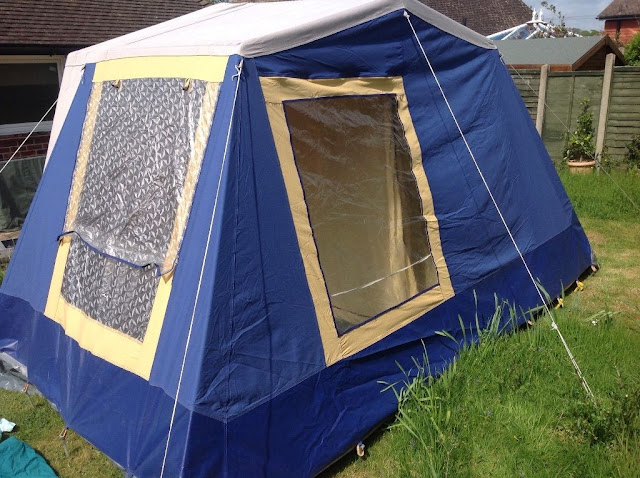 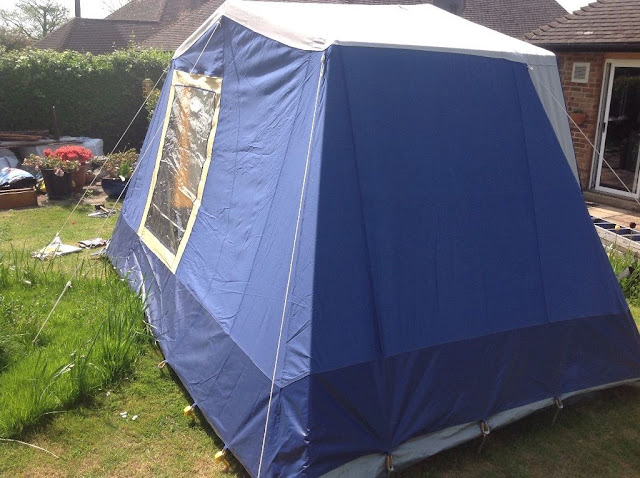 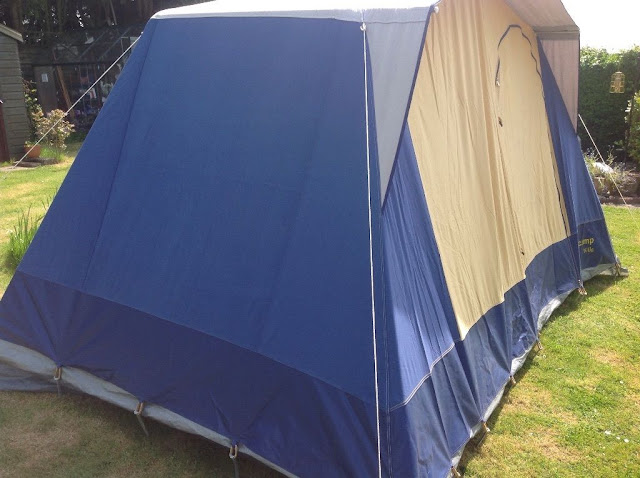 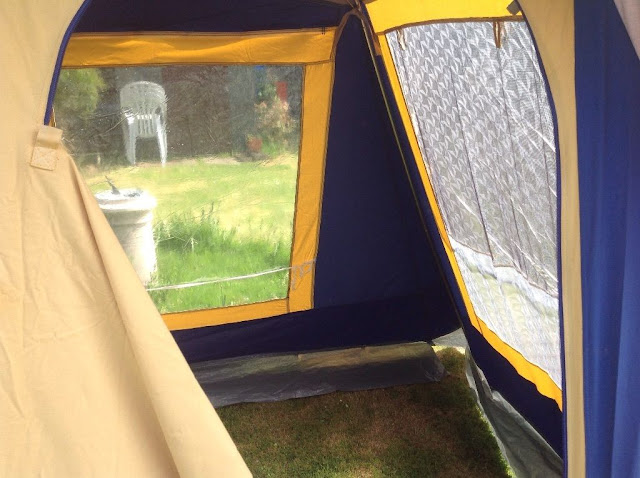 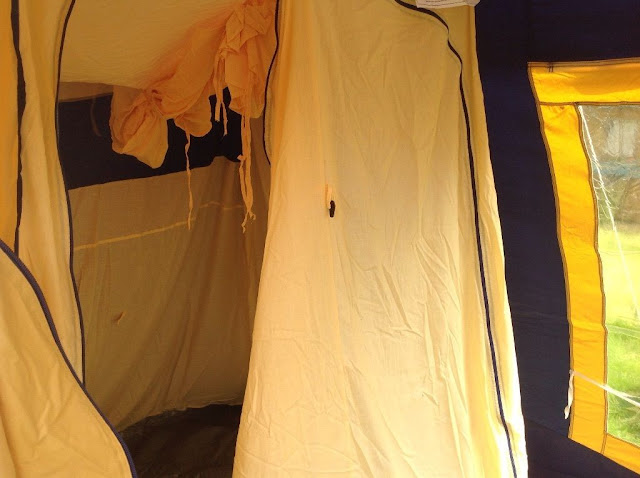 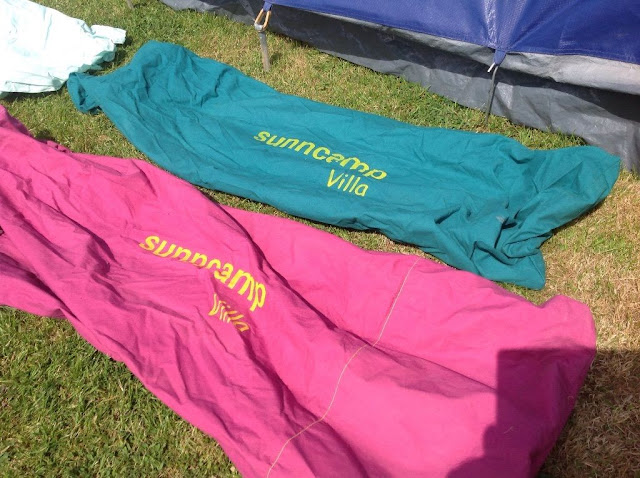 These photos are from the original Ebay link. It's in my house now, still in its bag and I'm actually looking for a time to use it now but struggling because the next two trips, my Bell will be used.
Posted by Campervic at 21:30