The Share Centre is one of those love it but hate it places. The ethos and the atmostphere of the centre is brilliant, creative, inclusive and welcoming. Here's the thing. The Campsite isn't great. It's ok, in as far as you have a bit of grass and access to Electric Hook Ups and to a loo and shower.

Now this next bit contains a bit of a rant about how things are at the campsite and what I think should be done about them. You are welcome to skip this bit if you want and it is all in italics so you can easily do so.

The first big issue is that there is no access with a car. This lot (see pic) took me an hour to carry back and forth to the chosen area. I tried to go as far in to the campsite as I had the energy to do in order to get a bit of privacy as the areas around the entrance to the campsite are often densely used and if you pitch up there you could end up with someone elses guy ropes right past your front door.

Issue two. The showers for the ladies are a row of shower heads along a wall with no dividing curtains. It's a bit like being at school only in my school at least we still had curtains. There is a wall to hide your modesty from an open door but you shower in view of other people who are also showering. There's no lock on the door which is accessed through the ladies. I suppose a lock would mean you have about 8 shower heads all to yourself which could create a queue outside. Isn't it obvious that this is appalling? There's three things you can do here, insider tips if you will. First you can take a shower and just be really quick and hope nobody comes in (this causes a certain amount of stress) or you can take a shower in the disabled shower which is a separate room.Lastly (and my preferred option but you have to pay extra) is you can go for a swim at the pool which is a five minute dander away.

Issue three (minor I suppose) is that there's no soap in the ladies. You go to the loo. You only have plain water to wash your hands with. You could bring your own soap, but I find I nip to the loo when I'm passing the amenity block and I won't always have a bottle of Carex in my jeans pocket. Even if I intentionally go to the loo, the natural assumption is that there will be soap there, either a dispenser or a bottle of handwash. In the whole weekend I was there, I forgot about there being no soap on every single occasion I was in the bathroom. In every campsite, in every shopping centre, in every public place in the land - there is soap. It's a convention. It shouldn't be a big thing, but it could have a serious impact if someone suffers from food poisoning because they've been barbecuing and preparing food.

Under utilized - The dishwashing area.

Now I've seen the glory of a really well appointed kitchen area at a campsite, which is the mainstay of many a campsite in this beautiful land, I think we should be making more of these dishwashing facilities. Unfortunately in the case of the Share Centre, it's distinctly scruffy. There's missing surface on the edge of the worktop, which begs a hygiene question. The sinks were clean enough and the place does get washed down, floors and surfaces. I tend to bring my own dishwashing container anyway. There's a bin, that's good. New (to me anyway) was a fridge, sitting up unnaturally high on a worktop. This is clearly a cast off fridge from somewhere else, and someone has thought 'I know, why don't we let the campers use it' which is fine and great. The fridge is pretty grotty though. It did have an icebox which was useful to put my ice packs in, and they didn't get stolen which is even better. I noticed as the weekend wore on that someone plugged in a mini fridge and kept a few beers in the main fridge. Then someone else was charging their phone up, and I realised that opposite the dishwashing sinks (2 of)  there is a couple of double sockets and actually there's enough room to put a stove and prepare food (if you've remembered your handwash) and store food (if you risk using the fridge) and you could store your items there too if you placed a bit of blind faith in the other campers.

What a world away from Mannix Point in Kerry, The Apple in Tipperary, even Hillfoot in Dungiven, where there's a busy inviting kitchen that people walk through, rest a while in, chat in. Things don't go walkies so much when people develop a relationship with their fellow campers. When there's a place to sit, potter and prepare food. When everyone chips in and even, dare I say it, share a bit!

Here's a campsite with so much potential. There has been no investment. The complaints I had about this place four years ago have not changed one tiny bit. The Share Centre is a charity and I understand it's a daily struggle to keep the doors open. I sympathize with that. I would be up for supporting the place. But people do not want to struggle when they go on their well earned break. They do not want to work really hard huffing and puffing carrying heavy camping equipment to a pitch. They do not want a frankly grotty amenity block. They want to wash their hands hygienically, have a shower in privacy, basic stuff here!

My suggestion, and I don't expect to be listened to here (as I highlighted my concerns four years ago, and nothing has changed), is that a road needs to be installed through the centre of the campsite. There is a curve of land that is already in a hollow, prone to churning up mud, hence the reason why cars are not allowed on site. It starts at the car park and heads diagonally towards the rear of the site, towards the main road and the ropes activity area. It does not need to be a tarmac surface. Many campsites have a rough rubble road, what planners call a metallised surface.

Is Planning the issue here? I don't think so, the site already would have Planning Permission to operate as a campsite. I don't know if there's any extra permission needed to install a roadway that would also improve drainage if pipes were installed too, may as well have those too if you're going to dig a hole in the ground to fill with rubble and stones!

Righto, if you've skipped to this bit, this is the camping bit.

Below is my trusty Vango Icarus, I have had this for four years but it is getting on a bit. Still functional and no tears or pole breaks or leaks and although I fancy the new colour of green on the current ones, plus the redesigned and much bigger 'panoramic' windows on the same, I'll use this one until it is much more done than it is at the moment. I brought what I thought was fairly basic camping gear, whilst still being enough to be comfortable. I had a tea/coffee making station, a decent camping bed to sleep in and I brought the electric hook up cable in case I got cold so therefore I had a small fan heater. It proved to be unnecessary as I wasn't one bit cold. Doggins was accommodated in a 'pet pen' which is simply an alternative to a tether arrangement but I wish I'd just stuck to the tether as this is quite a heavy object to carry. She also had her own crate for night time use inside the tent. It made a handy coffee table too.

So how did my weekend go? Well it was great to see my son, who is 17 and who I'd never been separated from for a whole two weeks before. We went in to the shops for some supplies, we went for a swim together on his day off on Saturday, and we shared a barbecue together, sitting up late with my son and his friend Damien til' all hours around the campfire. On the Sunday the tent got wet and so I had a wet pack up, which was sorted out later at home. Good weekend all in all. 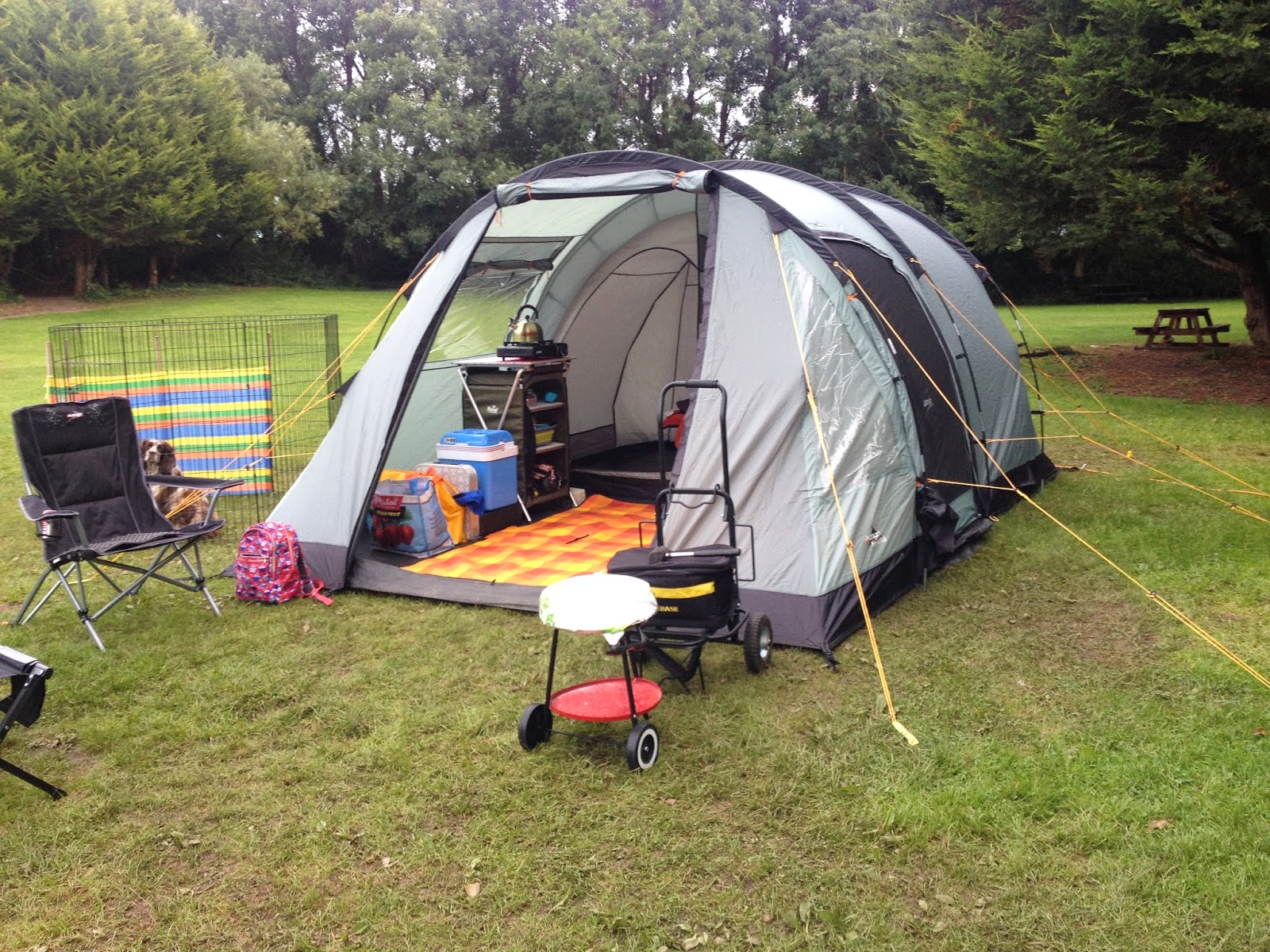 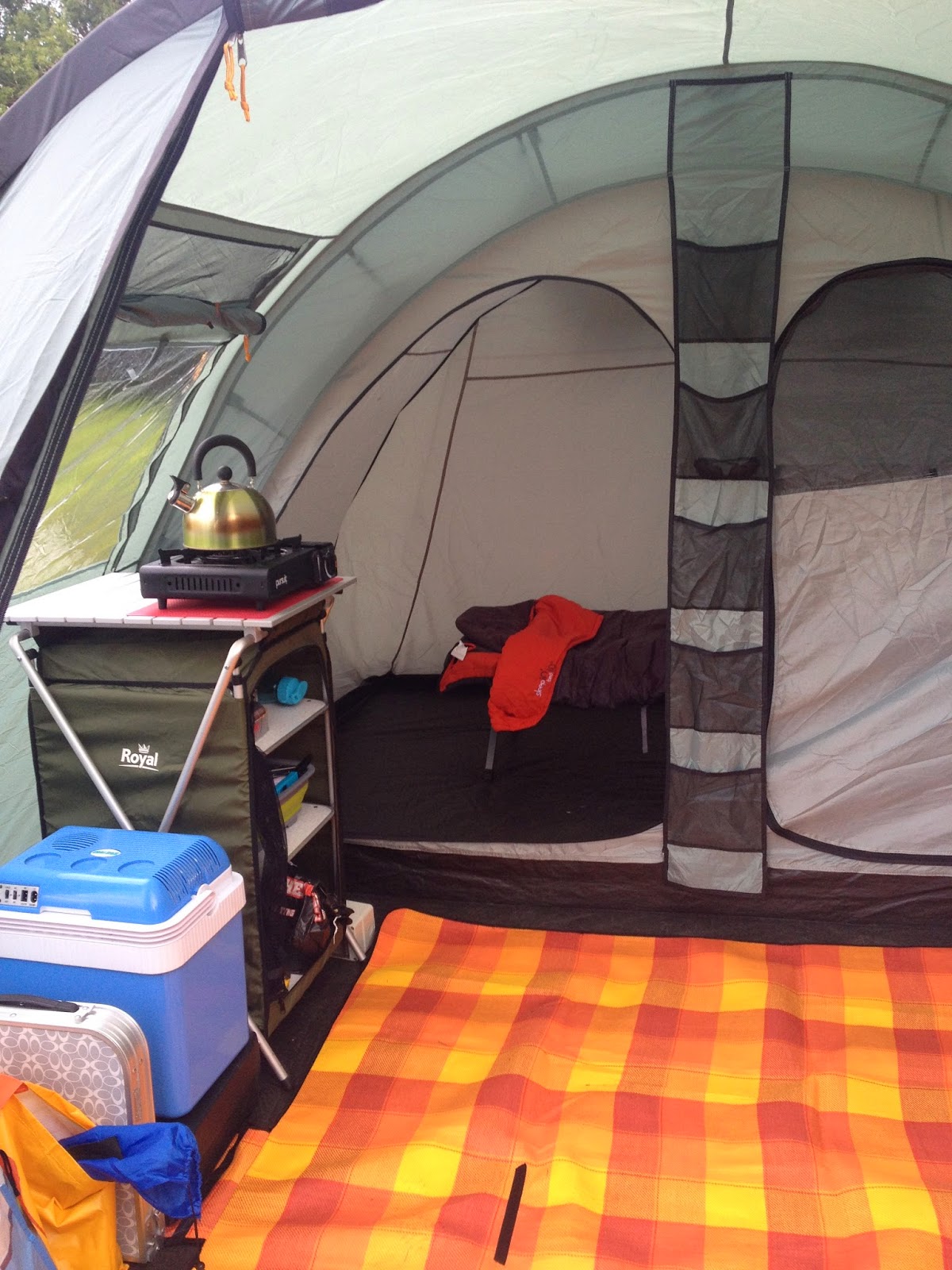 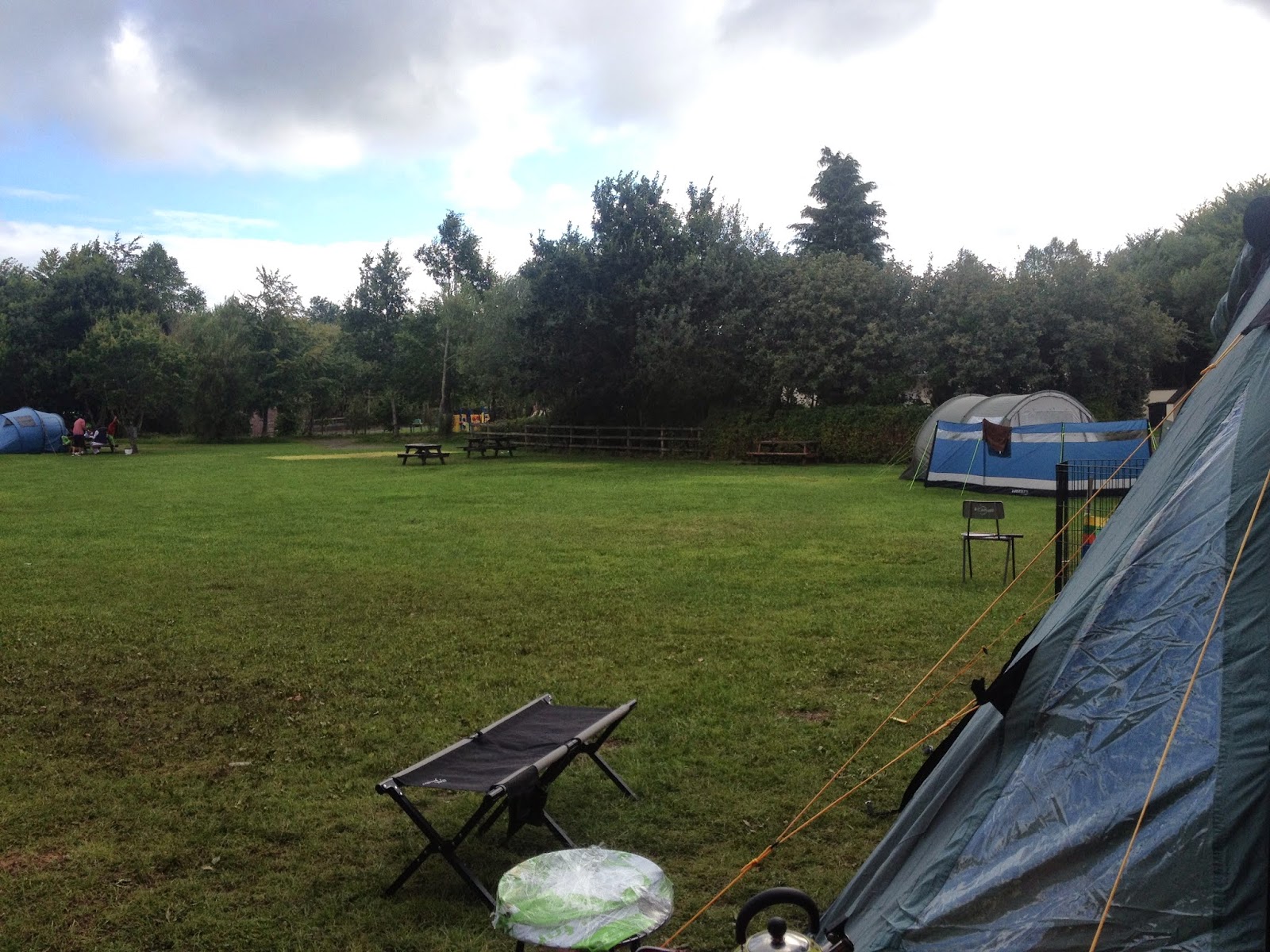 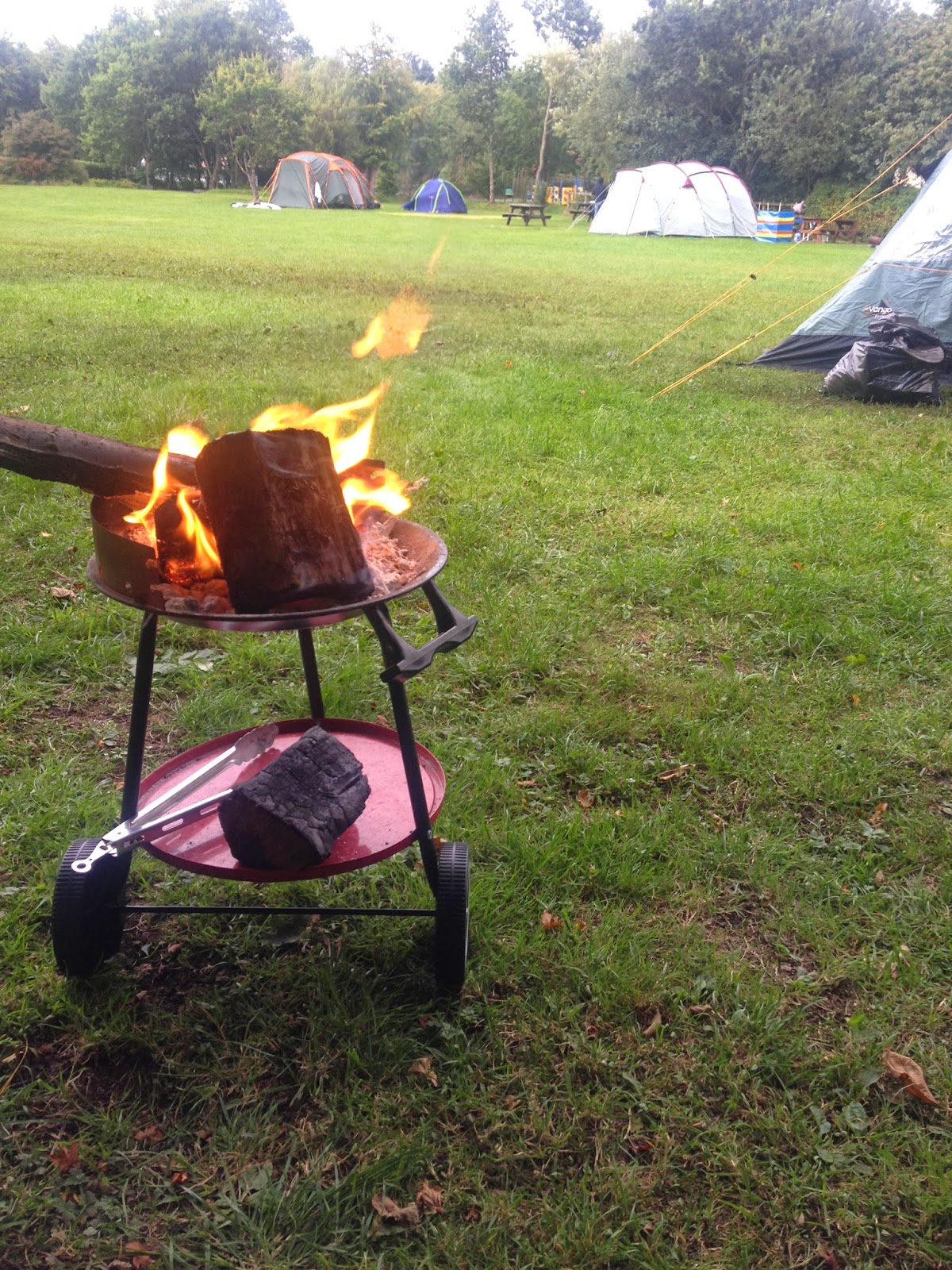 Bed and Bedding is the make or break of a good camping trip. Here I used an Argos steel framed campbed. An old sleeping bag to use as a bit of padding. 5cm Decathlon 'Sleep In' bed which is a Self Inflating Mat and sleeping bag integrated. Pillows from home. I used the 'level' function on my phone to find the more level bit of the sleeping area to put my bed. I am very fussy in this regard! 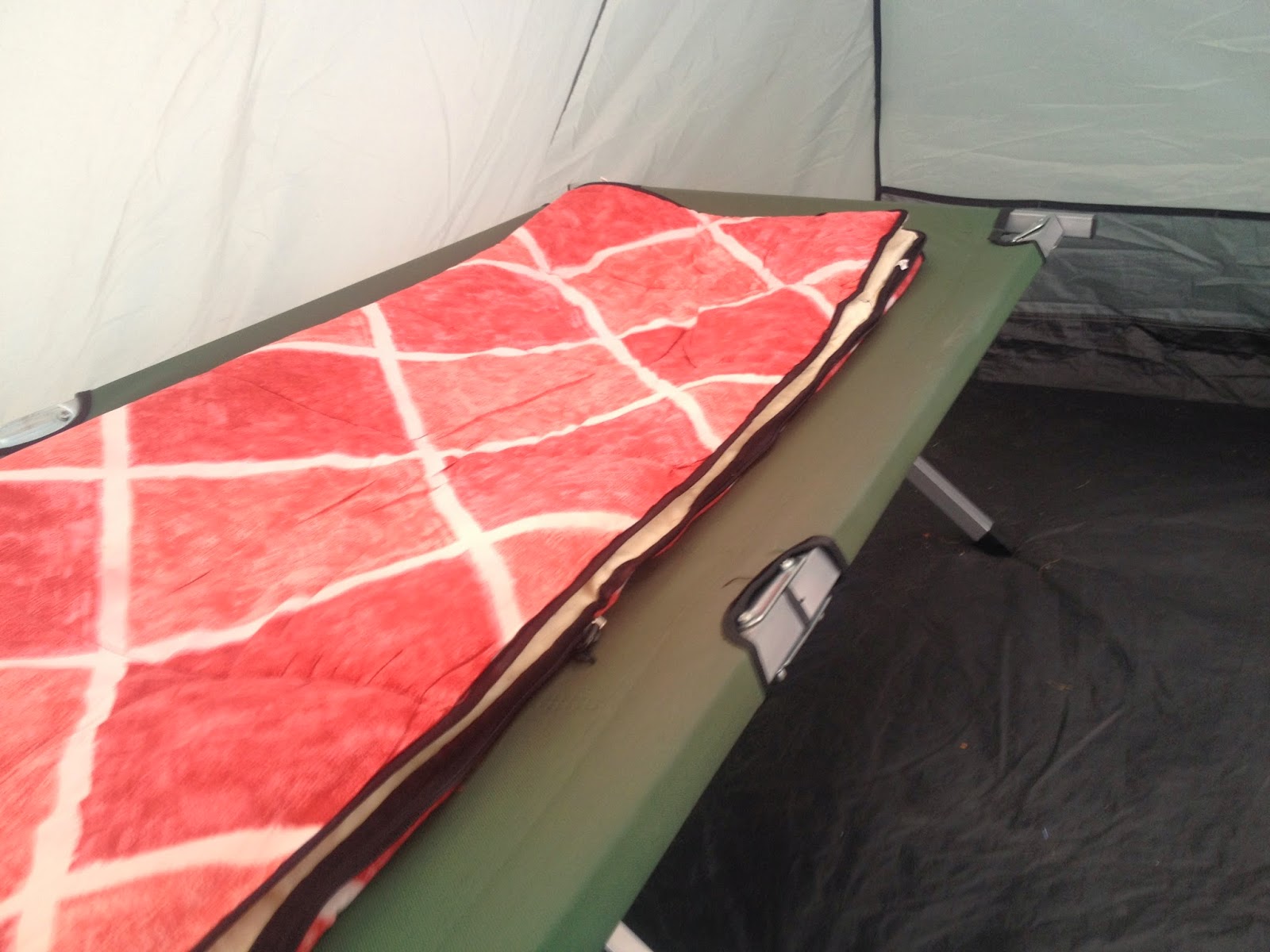 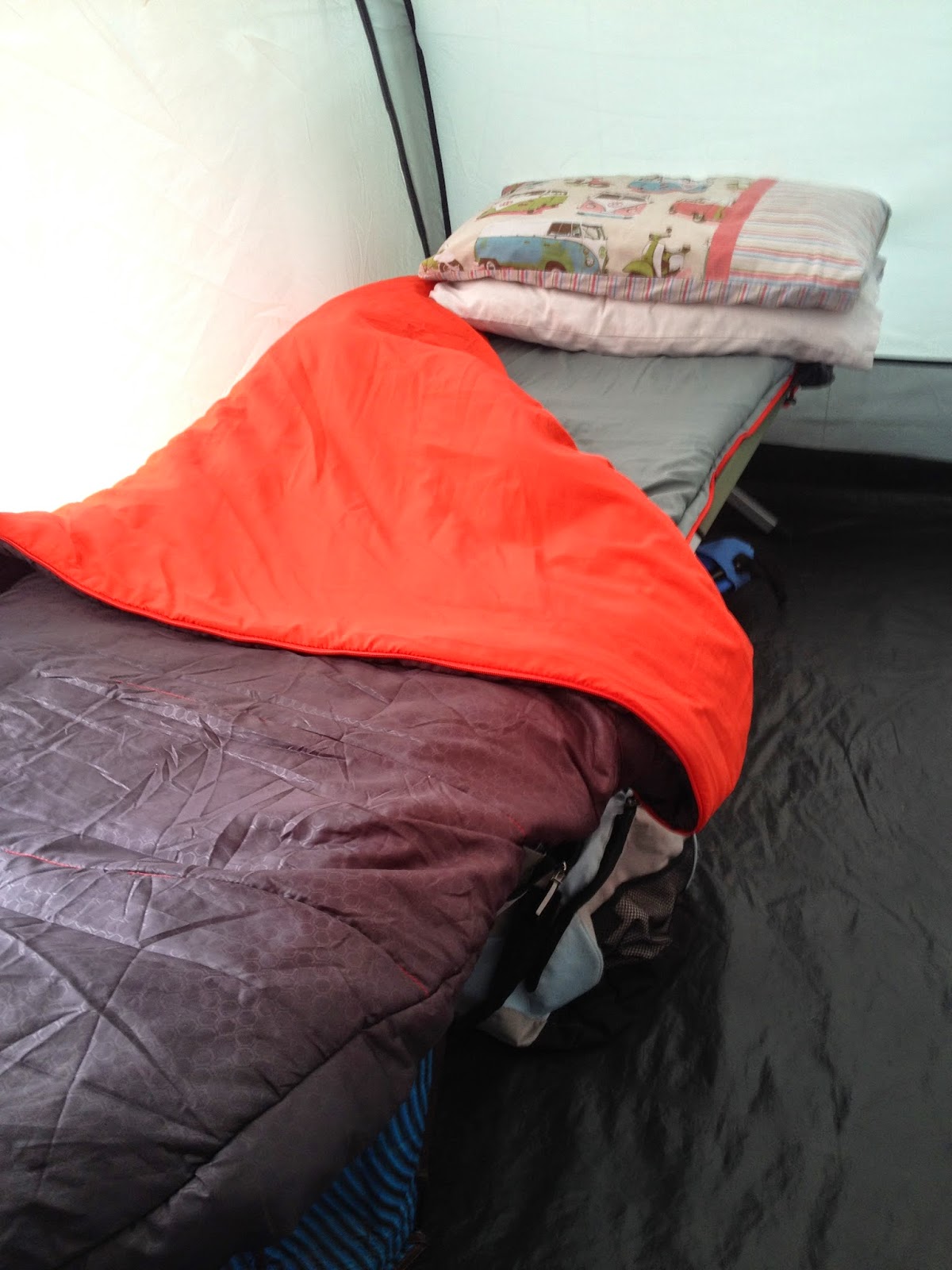