That bloody Satnav, going to Woodlands campsite Tralee, and the review and trip report

For reasons unfathomable now we made our journey through the night. We left home at 2.40am and drove through Dublin to Limerick, then on to Tralee. The Sat Nav helped and hindered in equal measure. The Sat Nav was bought four years ago, and in Ireland they've been road building like mad in that period of time. So when part of our route early in our journey was closed with road works and then the diversion signs we were following suddenly disappeared, we found ourselves on back roads, in fog, in Caledon in Tyrone of all places. I set the Sat Nav at that point and for daft Sat Nav reasons we ended up in Newry. I had a map in the car but checking the date it's even older than the Sat Nav. Had I known we'd be going to Newry we'd have just pootled down the motorway. Ah well.

(In hindsight - wonderful thing hindsight - I should have headed down the west coast, as everyone on my holidays told me that there's a new road that is motorway all the way from Sligo to Killarny)

The Sat Nav display showed us driving across empty fields the most of the way to Limerick too. I turned it off after the umpteenth time it recalculated our journey. We had taken a break outside Dublin, got roadside coffee and paid our E-toll for the ring road around Dublin. Then we took another break later in Adare, just past Limerick. We got a stretch of our legs but it was 7.30 and nowhere was open for breakfast. By this time nothing less than a Full Irish Breakfast would do.

At Rathkeale we found a hotel just off the carriageway. I made enquiries. €10 a head for the works, including fruit salad, cereal, unlimited coffee and pure orange juice as well as our Full Irish. Just the ticket.

When we were practically there, bearing in mind I'm not familiar with Tralee, the Sat Nav redeemed itself and brought us straight to our site which was wonderful considering it was now 9.20am and we'd been driving for hours.

I know drivers, van and lorry drivers, who could do this journey with out batting an eyelid. I know people who have driven that kind of journey and longer and it is absolutely no problem to them. I am not one of those people. I am full of admiration for people who drive for a living!

Now, newly arrived at Woodlands I approached reception. This is where I was glad of that coffee. The thing about Woodlands is you need your wits about you. I had phoned beforehand and got a price. That was not the same price that I saw being written down on a form by 'HER'. I shall call her 'HER' because I did not find her particularly warm or charismatic. 'HIM' is much easier to deal with, and at least you don't get ripped off (obviously the resident husband and wife team). The price she wrote down was €9 more per night than I'd been quoted by 'HIM' over the phone. Michael is his name I believe, he's grand, friendly enough. Anyway I called her on the sudden price increase. There was a little bit of blustering from 'HER' and I paid the price I'd been quoted previously for the four nights and I left feeling a bit cross.

Ok we could put this down to a genuine mistake, although the reason she gave me at the time doesn't stack up. But then the kids reported to me over coming days that things got a little more expensive in the shop when it was her serving in the campsite shop. A packet of sweets jumped 40 cents for example. Fizzy drinks also jumped in price. If Michael was serving things were a little cheaper again. Maybe it's just me, but I don't like the feeling of 'what can we do them for' rather than sticking to a genuine price. Maybe he was was undercharging! I don't know. Still it leaves a bad taste in my mouth.

The pitch we selected was lovely though. It was the start of our amazing heatwave, and we were pitched under two Ash trees which gave a lovely bit of shelter from the full sun all day. The site has got lots of planting all around, so the flowers were in full bloom and it made the place look very pretty.

The amenites are all in one block, a two story building with what I take to be living accommodation upstairs. The ground floor housed a reception (with aforementioned shop selling sweets, drinks, milk, and I think it sold gas cannisters and the like too), a games room with two pool tables, both male and female showers and loos, dishwashing and laundry areas, and a 'sitting' room which had all the comfort of a prison cell. The campers kitchen was functional and had some dishes and pots available for people travelling light. 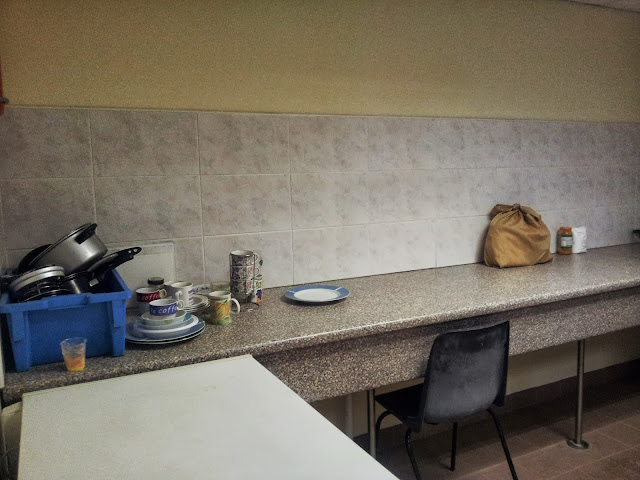 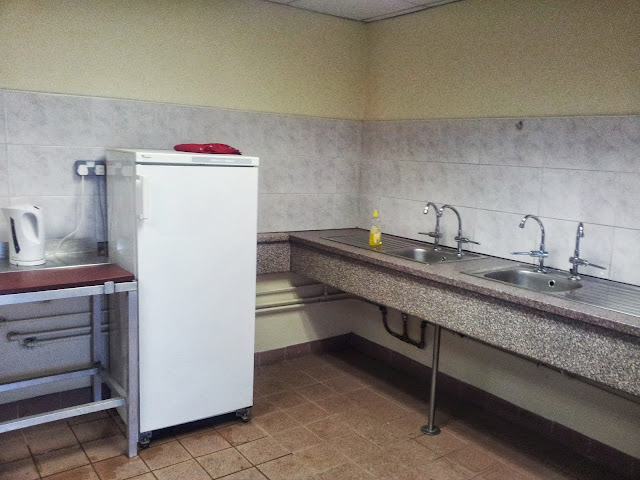 It is hard not to compare Woodlands to Mannix Point, but Woodlands just isn't in the same league as Mannix Point. The campers sitting room in Tralee is ok, 'functional' but at Mannix Point it's full of musical instruments and old photos on the walls and comfy seating. The campers kitchen in Tralee was 'functional' too. The prettiest part of Woodlands is probably the barbecue area outside the campers kitchen. The area has been created with a couple of picnic tables, and a built in barbecue which is just the right size to hold a disposable barbecue. On the other side of the barbecue is a few pots of herbs, with a sign saying help yourself to the herbs for your barbecue which I thought was a nice touch. I saw this area being well used by backpackers, cyclists and bikers, basically anyone travelling light who didn't bring a chair.

Can't comment on the guys toilet facilities, but I found the ladies to be regularly cleaned and there was a hairdryer on a hook on the wall which was useful. The room was split in two, with a row of showers along one wall and on the room divider there was a row of sinks opposite the showers. On the other side of the divider was a row of toilet cubicles. Maybe 10 or 12 in all. Towards the front door of the room was a cubby with a further two sinks, mirrors and the hairdryer. I think there was a fold down baby changing station in this area too (didn't really absorb it all as it's a long time since I had to change a nappy). The only down side to having the showers in the same space as the toilets is that everywhere (walls, doors and toilets) is dripping in condensation from the shower steam. I've been to plenty of other sites where the showers and the toilets share the same space and there's enough ventilation to wick the steam away. Not here though.

There's an enclosed play area with slides and swings beside the entrance, and a barrier with a key fob with a refundable deposit. The access is from a main road, over a bridge which crosses a river and the road is plenty wide enough for two vehicles to pass without having to pull in, even the bridge. I would still recommend, whatever the site, for caravanners to use Google Street View to have a look at the access. 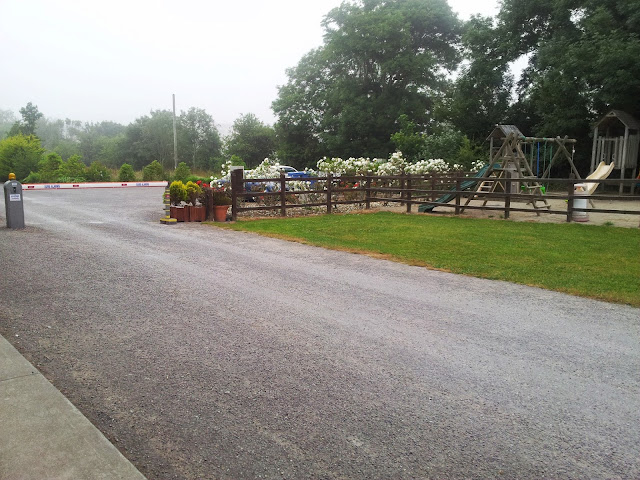 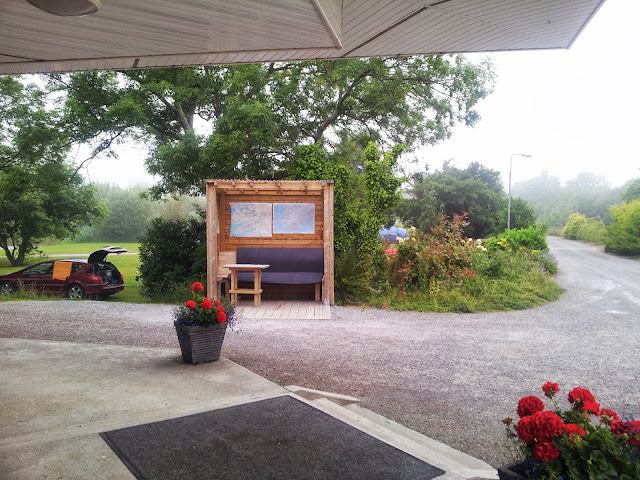 The good thing about Woodlands is it is very close to a large town (is Tralee a city?) and that brings with it a cinema (€9 a head), a swimming pool with lazy river, sauna etc (€43.20 for family ticket €12 for child ticket but there is no time restriction on this - I thought it was too dear, my kids went on their own and reported it's not as good as Lisburn Swimming Pool), all the restaurants and coffee shops you could shake a stick at. It was also closer to Killarney from this site than it was from Mannix Point and Dingle Penninsula is on the doorstep. So as base to explore other areas from Woodlands is good for that. 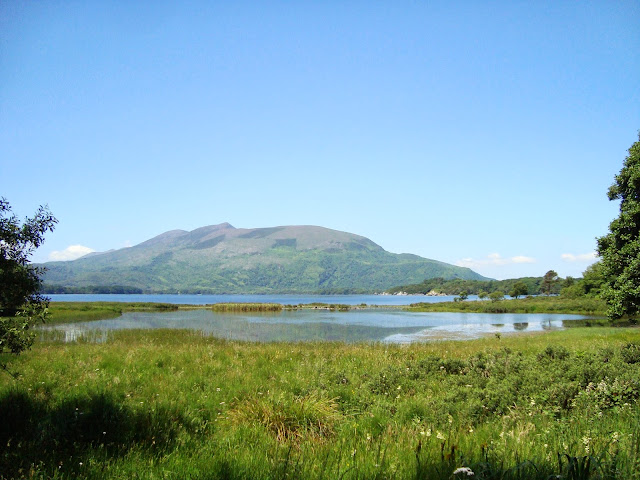 The area is adjacent to a wetlands area - the sign to the Wetlands centre, slightly downstream from the river that you cross to access the site, should give that away. So watch out for beasties. Midges, mosquitoes and Clegs/Horseflies (damn they hurt) are abundant and deet didn't seem to make a pick of difference. In fairness there was midges at Mannix Point too, we were pitched close to a boundary hedge, but the sea breeze helped to blow them away. I would recommend a variety of insect repellents, a anti-histamine tablet if you re-act badly and Anthisan cream or your favourite bug bite cream.

The 'tent' section to the north of the Amenity block is worst affected with midges, there's a tall flood bank to one side of it (I wish I'd spotted that before pitching the tent). The other parts of the site seem to be much less affected by the local wildlife according to those people I got into conversation with. It seems I picked the worst pitch regarding beasties. There are no marked out pitches, just pitch where you like.

There is a lovely campsite dog (I believe the site welcomes dogs, we had left our dogs at the Kennels at home), he's a black labrador and he's called Finn. He is very sedate and is generally kept on a long tether outside reception, unless he is going for his walk when his custom is to go through down a little hill and through a flower bed. Unfortunately I went and pitched my tent right on his little route and so I was saying hello to Finn twice a day. The first time he stopped dead and looked at me, as if to say 'why did you put that stupid tent in my way'.

He is also an alleged cake stealer. I had a tea cake wrapped up in tin foil which was home made and pretty substantial and would have fed us for a week as it was quite big. One day I turned my back for literally one second and when I turned back there was only tin foil, wafting across the grass. Luckily we got about half of it eaten. I was tempted to phone Miss Marple. Not once did I see the dog or the cake again that day. I think the fact he was keeping a low profile speaks volumes.