Right, some tent talk now. The first tent we'd used was a fairly ancient ridge tent  when we were in Tralee but we swapped that for a really big 8 man tent (an Easycamp Topeka 8) for our remaining ten days of the holiday. The tent is a borrowed one, my sister bought it a couple of years ago and has used it three or four times with her family. As my two are getting older, I wanted them to have the privacy of their own bedroom pod and you have to go to an 8 man size to get this. Now, if it had of been raining, we would have been delighted with our huge aircraft hanger of a tent! 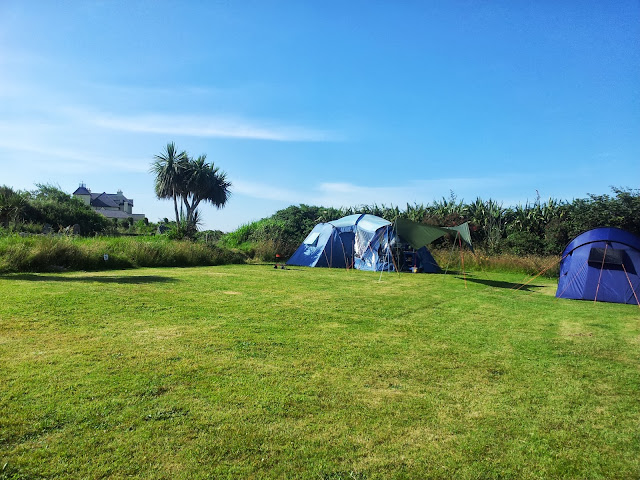 Although the separate bedroom issue still stands, the huge size of the living space in this tent meant that it took up a significant amount of our pitch and we couldn't be in the tent anyway during the day. It was like a sauna even though I had the doors zipped open at both ends, but there was hardly any breeze to push a through flow of air. The best tent, hindsight being a wonderful thing, would have been the canvas frame tent we took the last time. Real canvas stays cooler in hot weather, the fabric is much thicker. I discounted it because of the bulky pack size, but I should have made room for it anyway. 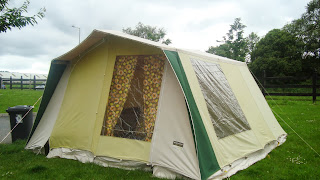 In the end, we were really dependent on our tarp. I got this one from Field and Trek two years ago for a whole big £6.66 (with a discount code and free delivery) and it came with two poles. I already had two poles from another tent and so this is a really flexible shelter since I can change the configuration and move sides up and down depending on where the sun is. I've had a look and I don't think mine is available anymore, but an alternative would be the one you can get in Decathlon for £20. The one I have isn't square, it's more of a diamond with elongated sides. Hopefully the picture will reveal all. I certainly wasn't the only one to use a tarp on this heatwave! 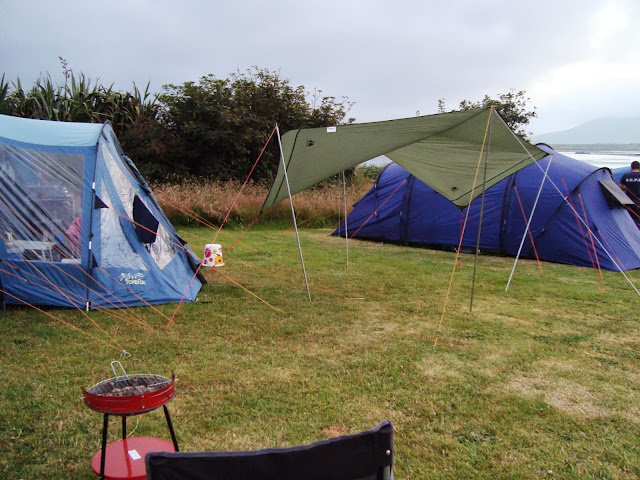 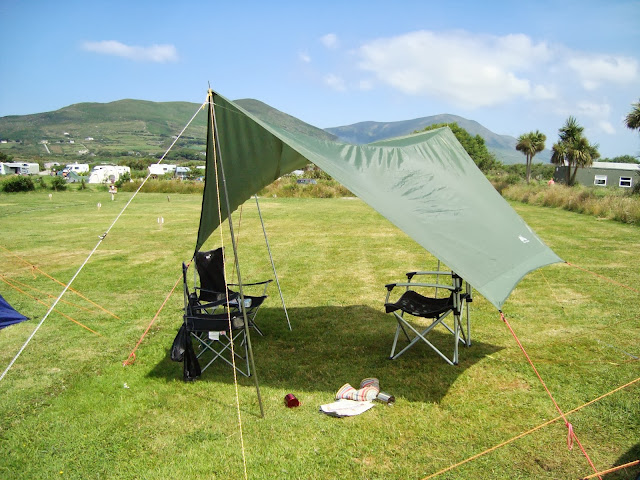 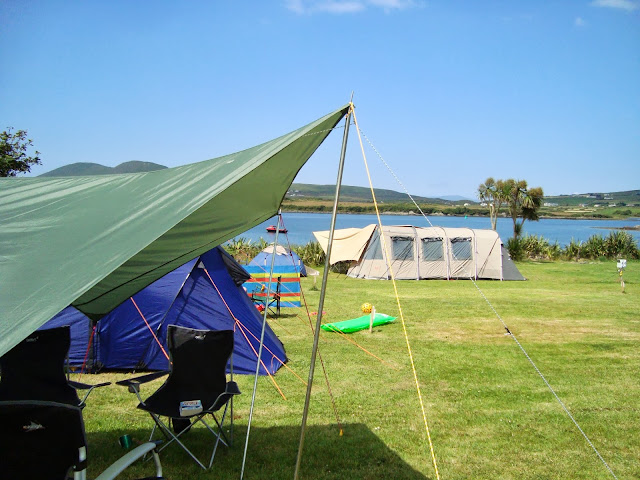 We quickly got into a routine, I would get up good an early because the heat built up inside my sleeping pod I had no choice. I'd get the kettle on and make a cuppa, then go and sit by the sea soaking up the beauty of the area. I'd be really disappointed if, for some reason, I wasn't the first up! I loved the stillness of the site, punctuated with the odd snore from a neighbouring tent. Then everyone else would start to stir, you could hear the zips going and the kettles whistling, the odd kid talking excitedly before a parent goes "shuuuushhhh". I'd work on getting my two up, which was actually quite difficult. Whilst doing this I would get in a few chapters of my 'whodunnit' book. Once wakefulness had been achieved, I would make more coffee and one or both kids dispatched to the local shop on foot to pick up the croissants. More coffee after and then it was time to decide on the day. On many days it was swimming, others it was just going into Caherciveen to get meat for that nights barbecue and salady stuff. Or one day we visited Ballycarbery Castle. 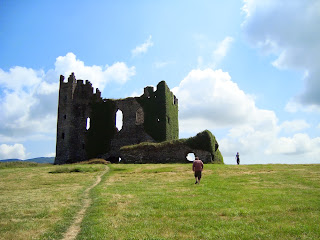 One day it was a drive around the Skellig Ring, which is a penninsula off to the side of the main 'ring' of Kerry and it was there that we discovered the spooky hotel.

We had driven around most of the Skellig Ring, stopping at the viewpoints on the top of the mountain and at the Chocolate Factory and Shop and then at a 12th Century Abbey where the monks settled after life out on the Skellig Islands became too harsh. Off in the distance we could see something that looked like a prison. Curious, we set off in that direction and brought the car to the end of a lane and left it at a farm gate. Proceeding on foot, we were a bit dumbfounded at this strange looking building which seemed totally at odds with the stunning landscape all around. Entering the building, we found a small swimming pool with the roof caved in. We found the remainders of kitchens and a reception desk and concluded that it was a hotel. 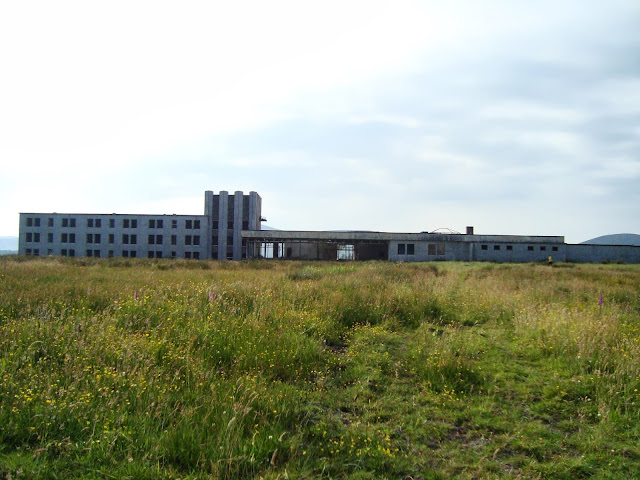 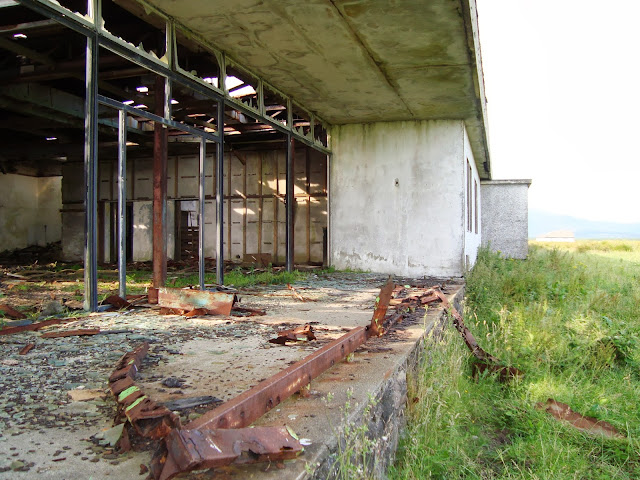 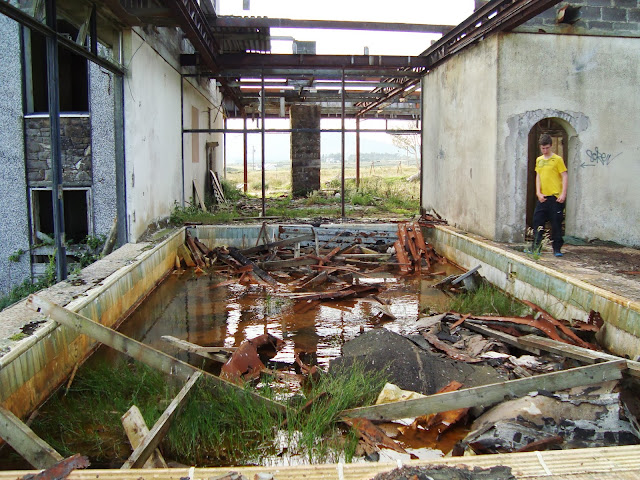 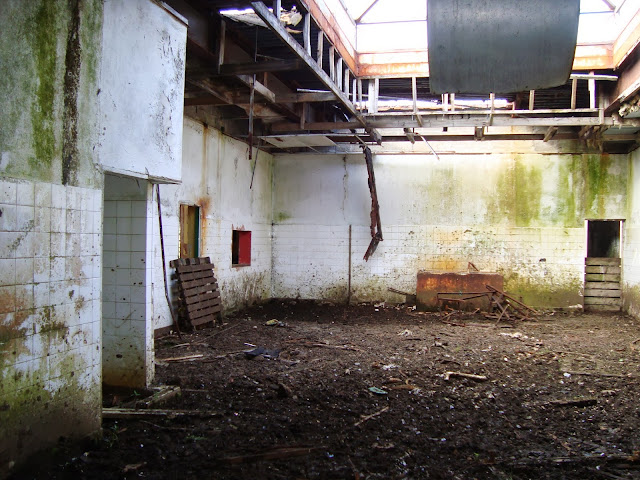 The residential 'wing' of the hotel was blocked off from what would have been the communal areas of the hotel. A quick scout around the side revealed an access to a staircase. The stairs were dusty and had old shoes and various bits of rubble all around it. There was graffiti everywhere but it didn't look as if this staircase was often used. The staircase was precast concrete. Structurally, it was sound enough. Still we proceeded with caution. 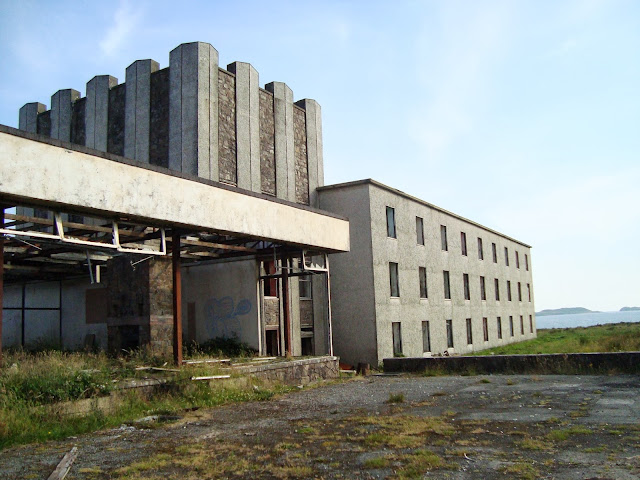 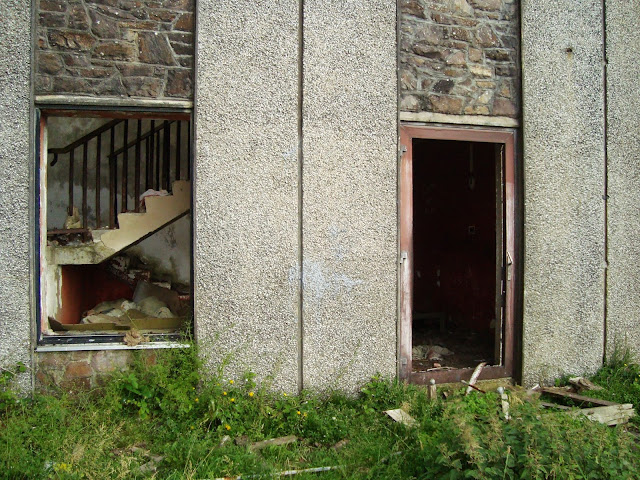 We went up to the middle floor. We were presented with a long corridor and the film 'The Shining' immediately came to mind. Some of the rooms had bits of furniture in it, one bathroom had funky 70's style flowery tiles, and all wallpaper had slipped off damp walls long since. We proceeded along the corridor, chatting to each other about the weirdness of the place and how much we'd brick it if a face appeared at a door. I snapped a few photos, each room had an outlook to die for. Halfway down the corridor it became obvious that apart from the odd backless wardrobe there was nothing new to see. We discussed leaving it there, as all the rooms were identical anyway. But something drove me on even though the corridor was half blocked with a single sized bed with some of the springs still intact. 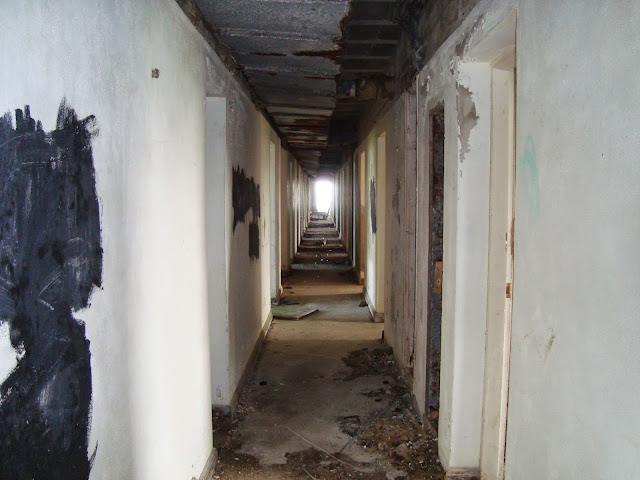 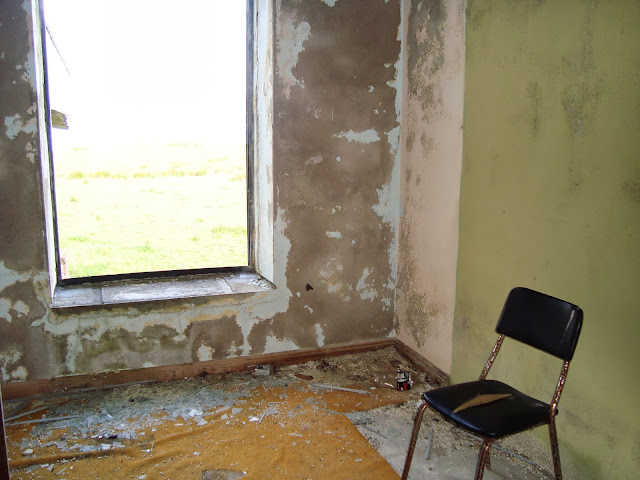 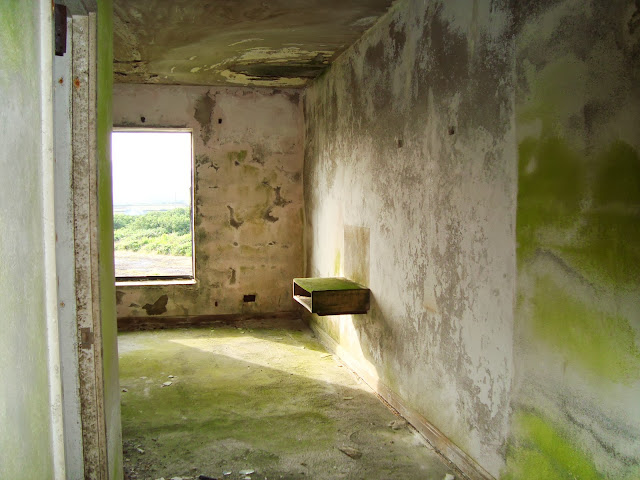 I looked through the doorway to the very last room. Something different here! A 4 ft barricade erected a little inside the door, gaps in the barricade revealed a swept floor and two mattresses indicated occupancy. A half filled bottle of coke in the window which, unlike all the others, had been blocked of with a sheet of wood.

Suddenly, from behind the partition, a crazy wild eyed man ran at us screaming and wielding a syringe filled with some sort of red fluid. We turned tail and ran like hell, past the bed that was nearly blocking our way, past the empty rooms, the whole length of the corridor, down the dusty steps with the discarded shoes, out into the sunshine and not once did we look back to see if we were being followed.....

Not really, that didn't happen. We still got slightly freaked out by the signs of occupation and decided that no would be a really good time to leave. And we left in a sharpish manner.