I honestly forget how much pleasure it is for me to go solo camping. On this occasion nothing would do but I had to go to the beach. I've had a stressful few months and the need for an ocean breeze to blow it all away was very strong indeed. I toyed with the idea of going to Carrick Dhu in Portrush and also with wild camping in the dunes at White Park Bay (although I don't think I'm brave enough for wild camping yet) but in the end I settled for the non electric pitch at Benone Strand. I chose it because there is direct access to the beach and the walks are very good, not only along the beach itself but there is a network of walks through the sand dunes as well.

Any camping trip is preceded by deciding which tent to bring. A few weeks ago I added another Quechua pop up tent to my collection, a smaller four man one. I wanted to bring it on it's first outing, but knowing that the weather was going to turn bad on me by Sunday I also wanted some stand up space, so I brought the Quechua base seconds too. The site I went to has a policy of charging extra for pup tents so I pitched the two tents butting up to each other because I was going to argue the case for a modular system should I be questioned by the staff, in the end I wasn't. 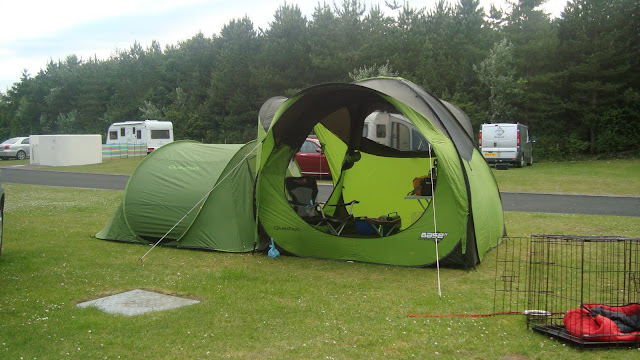 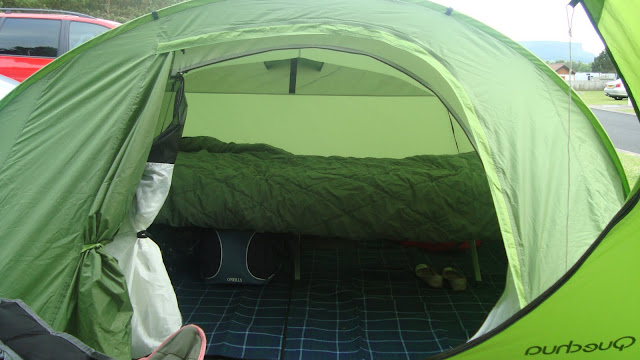 I had a really good set up, a bedroom and a living room in effect. The extra benefit was that they were extremely quick to pitch, both tents come in a large flat circle with a strap that holds it all together. Being pop ups all you have to do is release the strap and the whole things going 'boing', exploding out of your grip. Great fun! However there is always a price to pay, and in this case the cost is the difficulty of getting both tents compressed back down again which is always fun with a pop up!


Anyway as I said I got set up very quickly and got to the beach as quickly as I could as the night was wearing on and I was losing light. I got to the beach in time to see the sun setting over Donegal with some spectacular skyscapes and set about taking some photos. This was the best of them. 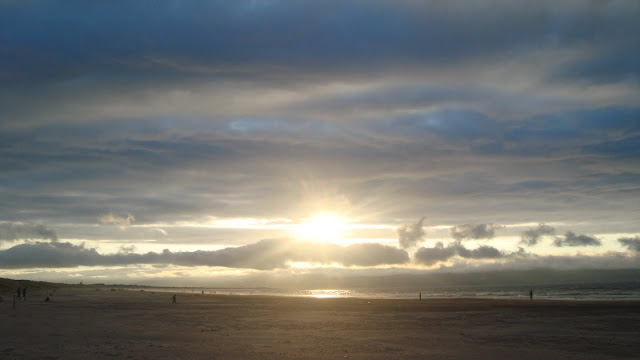 It's only taken me the better part of a year to figure out how to get decent photos on this blog!

Back at camp I started a small camp fire in the bucket barbecue using a firelog which I broke up into smaller pieces. It was so nice to have a fire that I gave my seat over to my little dog and went straight into hippy mode, sitting crossed legged on the ground beside the fire. It seemed like a good time to open the bottle of wine too and so I sat there getting nicely sloshed and feeling more relaxed than I have in many a long day. 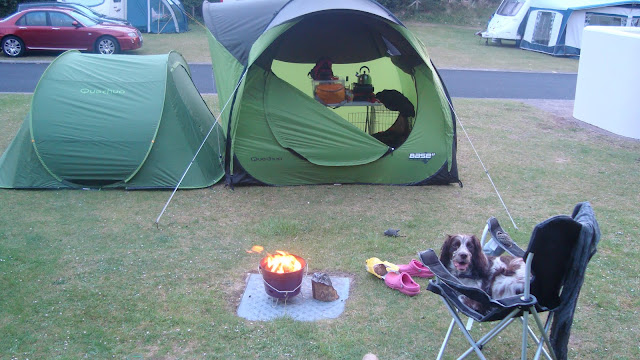 As ever there's always the morning after to deal with and so at 4 am I was out of bed in search of paracetamol and some water - my poor head was banging and I discovered the downside of camping in two tents is that there are four zips to get through before you can get to the camp loo!

The funny thing was in my inebriation the night before I could not find the car keys anywhere! I looked and hunted in every bag and nook and cranny of the tent but once it had got quite dark I was relying on a torch and a camp light which is not a very productive way of finding anything! I resigned myself to looking for them in daylight and it was on the Saturday morning I found the keys in the ignition of the car, sadly slightly turned and so I was now dealing with a flat battery. I wasn't overly concerned because I can call the AA out although I did prefer to get it dealt with locally if I could.

I consoled my hungover self intially by going back to the beach and having a paddle in the sea. I even had a little snooze on a sand dune which really helped with the sore head. 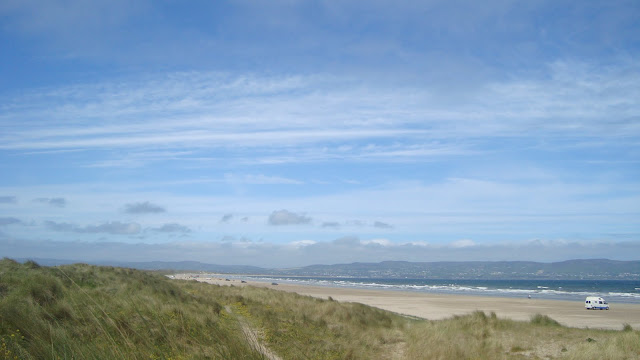 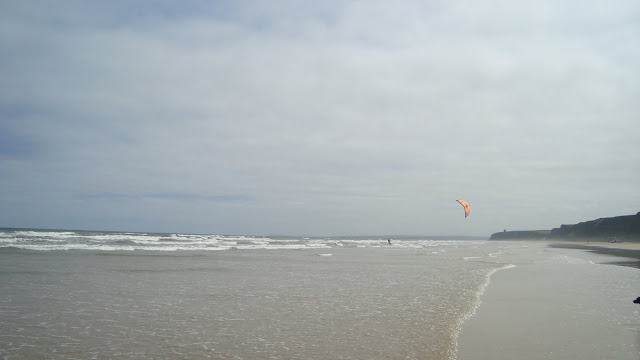 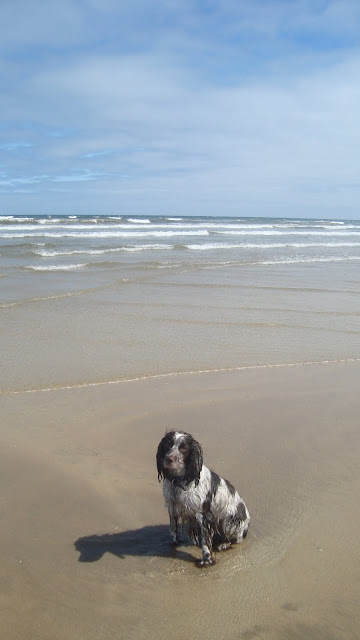 Back on site, my neighbours came to the rescue with the car and I met two lovely people even though I was quite mortified. Mark, who was a Motorhome nearby, had a set of jumpleads, but no access to the battery of his motorhome. So the guy who was caravanning across the way lent me the use of his car. Between them they got me on the road again and it was with much relief that I went in to Articlave for some Noodles from the Chinese Takeaway which I took into Castlerock to eat by the sea front. Actually my dog ate the most of it as I bought too much but funnily enough she didn't object to that!

I met another two very nice families as well. Joyce, Alan and their little girls were camped right next to me and are fairly new to camping, having only bought a tent last year. They were so friendly, keeping their paper for me and stopping for chats, and the children were really sweet too. Then Peter and Amanda with their children were camped two up from me and they were very experienced campers, old hands at knocking up one pot meals and had a very impressive family set up with their Outwell, their firepit and two cars to carry it all!

So I told them all about the Northern Ireland camping forum and handed out some business cards and Mark joined up straight away and has been posting away ever since.

I had such a great time that I would not hesitate to go back to this particular section of the site, and hope to book there for a family meet with all three of our families, mine, my sisters and my parents, very soon. However I still like those solo camping trips and in a way I probably need them to cope with the ongoing stress which shows no sign of easing at the moment!

I'll leave this with a couple of pictures of the site. 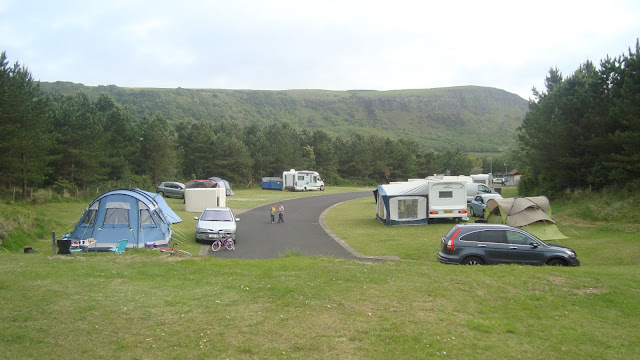 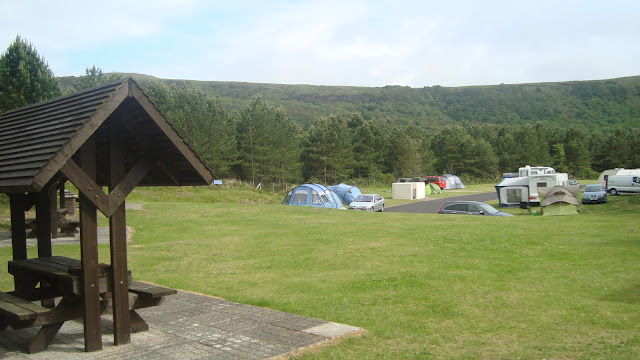