Afternoons camping by the seaside

As a follow up to my previous post we did have our afternoons camping yesterday afternoon, and I thought I'd share the photos of the new tent, which I'm really, really pleased with. I haven't admitted the purchase of this tent to my folks yet so ssshhh...keep it to yourself!

I have wanted this tent for some time, it is sold by Decathlon and is in fact a pop up tent. It comes in the shape of a large disc (81cm by 14cm) and weighs about 2 tonne....well it's not an easy package to carry despite the rucksack style straps. But ultimately this is a family sized tent so it's not going to come in backpacker dimensions. It has been superceded by another model, and is about to be phased out. The new model is not as pretty in my opinion, and I would have been gutted to lose out on this tent.

We went to Murvagh Beach in County Donegal, just a few miles from Donegal town itself. I knew that there were various places where people normally pitch as evidenced by the remnants of fires dotted around the area. Being lateish September we had the place to ourselves.

The tent was very easy to put up. This tent has a separate groundsheet which you peg down first, then you use the pegs already placed to tie down the tent. I reckon it was pitched in two or three minutes at the most. It is actually easier not to have the ground sheet sewn in because it means when it's put away again it's easy to shake the sand or dirt off the groundsheet rather than having it trapped inside.

We also went to the Golf Course nearby to see if we could gain access to investigate the old property I'd seen on the historic map. Unfortunately it was not possible as the clubhouse has a panoramic view of the entire location, and in fact looks a bit like an aviation tower at an airport! So there wasn't much chance of sneaking in! 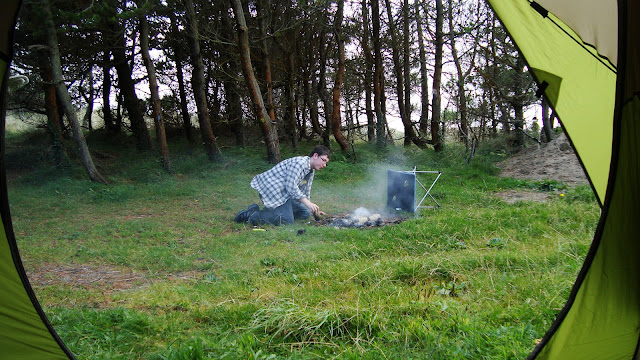 We did take some strolls through the forest along the beach, and found the remains of an old cottage, now in ruins although the roof is still intact. It was in the deepest part of the forest and was quite spooky, but the effect was exadurated by the approaching twilight. I would not want to spend a night camping there, although there was some evidence that people have done so. Thanks for reading!
Posted by Campervic at 16:34