Silver Bay Campsite, Ards Penninsula, Co Down was the venue for this latest camping trip, for just two nights over a weekend and not planned. I literally looked at the weather report, decided to go and just threw the contents of my hall (camping gear still there from my last trip) into the car in no particular order. I'd had an idea that I wanted to visit this campsite next because I saw a recommendation on Facebook and when I researched it the first thing that jumped out at me was it's coastal location. Bingo! You all know how I love a bit of deep blue sea.

It took me over two hours to get there on Friday afternoon, I managed to skip out of work a bit early and make it for about tea time. I met the warden, Stephen, who turns out lives in the static caravan opposite the amenity block and he drives a white van with 'warden' written on the number plate. He showed me to my pitch which was second from the end of a row of pitches which hugged the shore line of a field that was mostly steep, except for the shore. The top of the hill had a big ruined building which was accessible from the campsite. It is known locally as the 'White House' and is associated with the Savage Family who owned much of this area in days gone by. 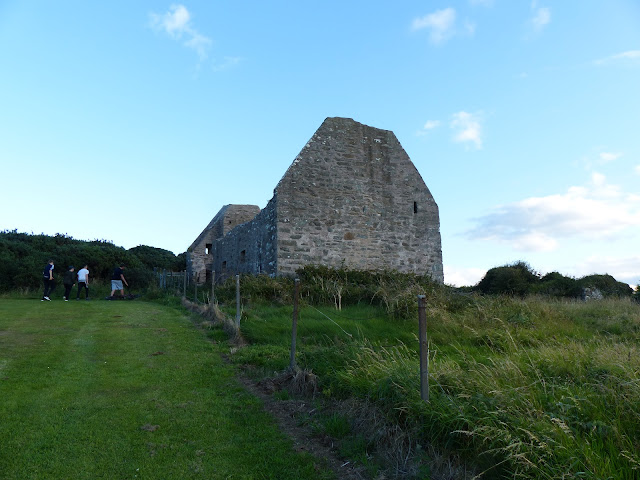 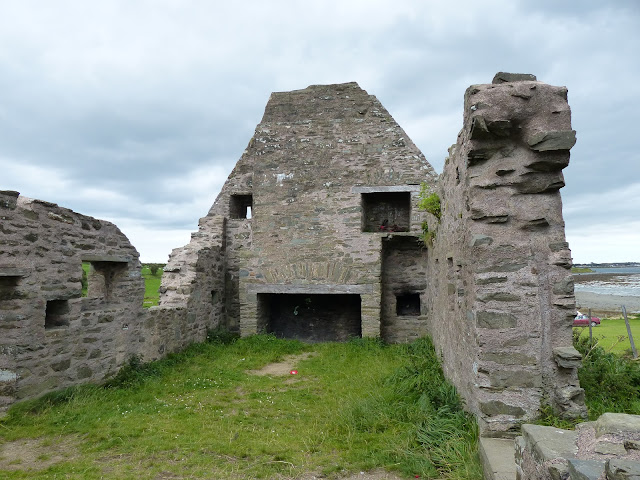 The shore is stony, and when the tide goes out, it leaves the bay completely and leaves some great rock pools behind, mostly populated by hermit crabs. But when the tide comes in the water is lapping the rocks mere meters from the front of the tent.

The Campsite is organised with posts along the shore line, roughly 6m apart. They are supposedly numbered, the one I was at did not have a number but the the pitch to my right, which was empty, was No 14. The name of the person who had booked it (and failed to turn up) was written on a piece of cardboard and stapled to the post. 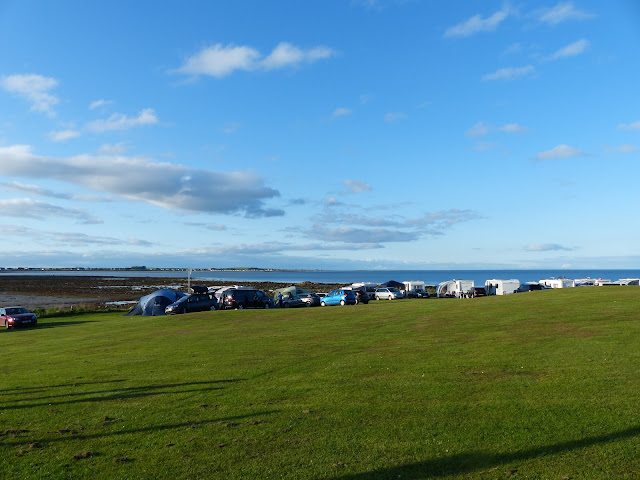 One issue for me is that 6m is not really enough for a pitch. This means that there wasn't a lot of privacy and the caravans in particular seemed squeezed in. When I put my tent up, I was touching guy ropes with the tent to my left. So much for a fire break!

That evening, for tea, I went to the mobile chippy beside the shop in Cloghey, Stephen the warden said it was good and he wasn't wrong, the chips were hand cut, fresh, hot and salty. The best I've tasted in a long time.

The Friday night was spoiled a bit by some camping neighbours who were playing club anthems on their car radio with the door open, and it was giving me a bad headache partly because the music was going thump thump thump and partly because I was annoyed at the selfishness of people. It was two Mums and a whole squad of kiddies. They were just as noisy the next day, radio on, car door open. I was so glad to see them packing up at lunchtime. It should be said the kids were great, it was the Mums that were the problem. From the point they left it was blissful, just the sound of the sea, the sqawking sea birds, the sound of chatter and kids playing, arguing and playing again.

(not that I'm nasty or anything, but I did set my phone alarm for 6am the next day which being about two metres from the back of their tent, I'm pretty sure did the trick of getting them up and about good and early....me - I just put the ear plugs in and slept on)

I had looked at some reviews and learnt was that the amenity block was some considerable distance away from where the touring caravans and tents were. The Amenity block was about halfway through a static mobile home section, and having measured this on google maps, I can now determine it is 0.2 miles away from the campsite. In campsite terms that is quite a trek - particularly if you are desperate! I noticed that a lot of my camping neighbours were driving to the amenity block and did have a chuckle on the Sunday morning when I overheard the Dad in the big blue tent (who had a people carrier) announce 'CHOO CHOO - ALL ABOARD THE TOILET TRAIN - LEAVING NOW' to his family who numbered a few children amongst them. I was very tempted to pop my head out of the tent and say 'can I come too please'. 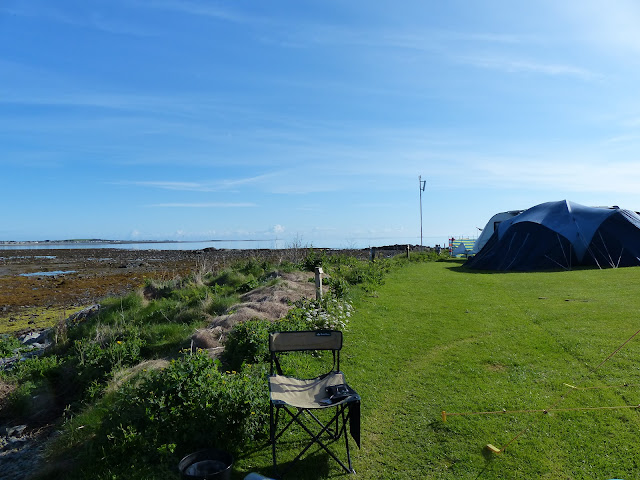 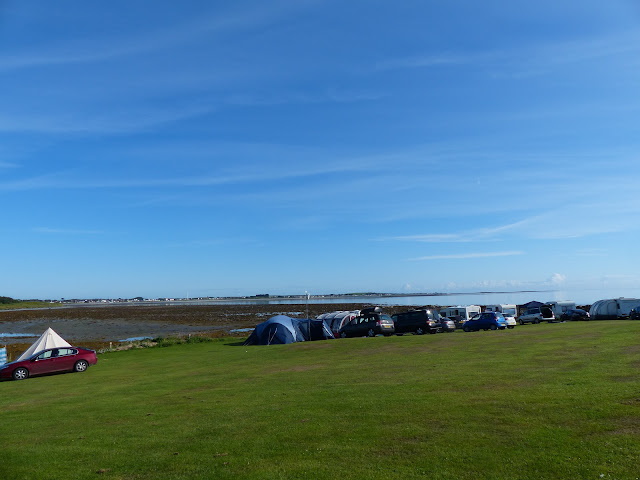 I brought the Bell Tent this time and I did not bother going down the 'glamping' route at all. I've decided I'm not much of a glamper anyway. It's just a tent, I sleep in it and sit in it and make coffee in it, I can't be bothered with cushions and special furniture. The nearest I get to 'glamping' is throwing the blanket on the airbed at a jaunty angle so I can take a photo to put on this blog. 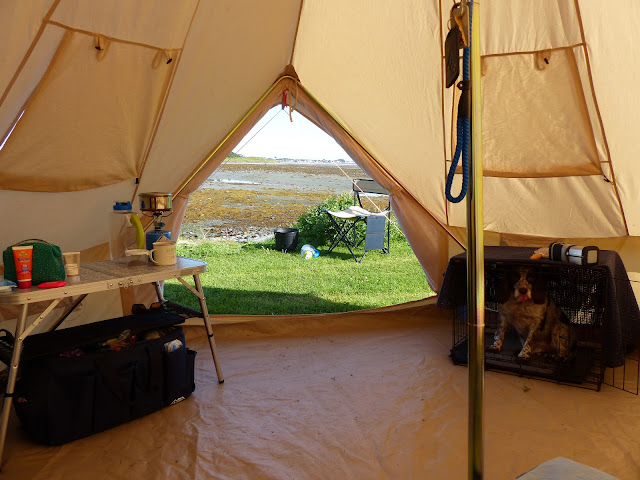 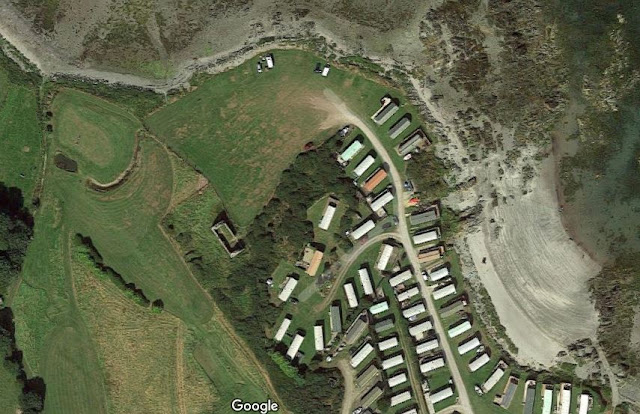 So I went out and about a good bit on this brief holiday. First of all I went to the Exploris Aquarium in Portaferry. I have recently got a fish tank with a few tropical fish in it, (Ziggy the Betta, one little Rummy nosed Tetra called Rudolf, he has a red nose. And a peppered Corey called Beyonce because he/she wiggles his/her bum). So now I've gone crazy for all things fish, and the Aquarium was a real treat. In fact I went to Maidenhead Aquatics in Dobbies, Lisburn on the way home to look at more Aquariums and bought two algae eaters who are now settling into my tank.

I particularly loved the really big tank they have, called the Pirate Tank. It has been designed to mislead the eye so you can't really tell how big it is, and the angles of the glass distort the surface of the water. There are sharks and rays in there, as well as schooling fish. I include this photo below which is credited to Ards Tourist Info as I did not get a good enough photo. 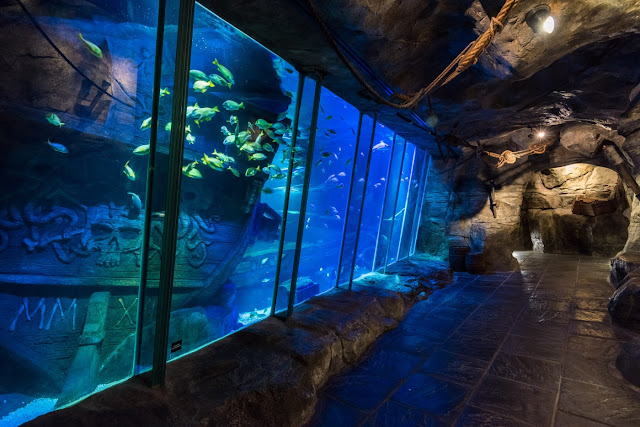 These next photos are mine, just general shots of the Exploris Aquarium.

The first picture shows the touch tank which has a talk at 11am every morning. The second photo is from the big Pirate Tank. Then lastly I found a 'reptile terrarium' with snakes, chameleons and then this 'nile croc' which looked a bit on the mean side. 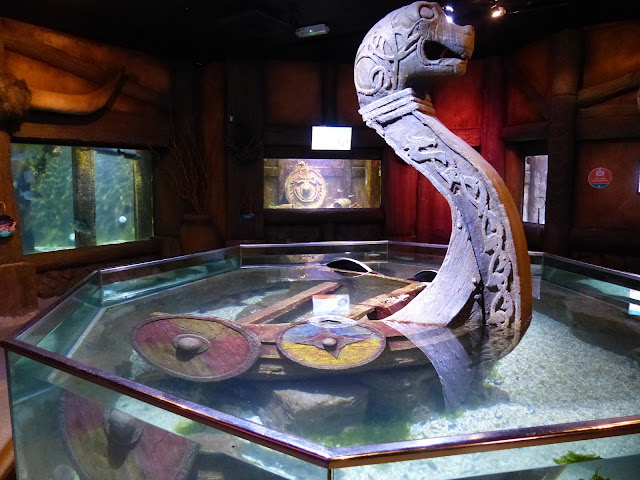 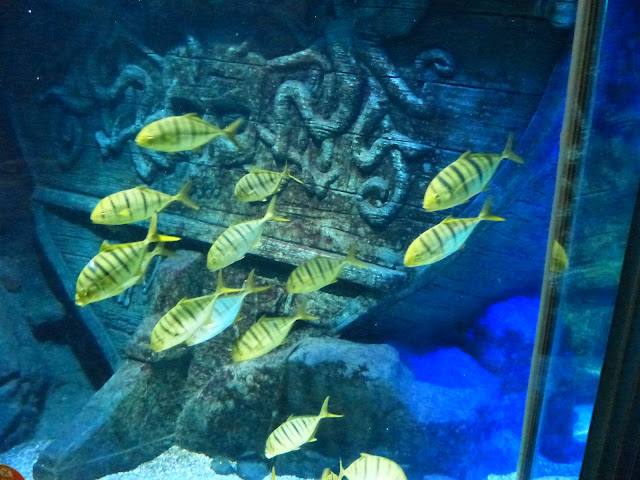 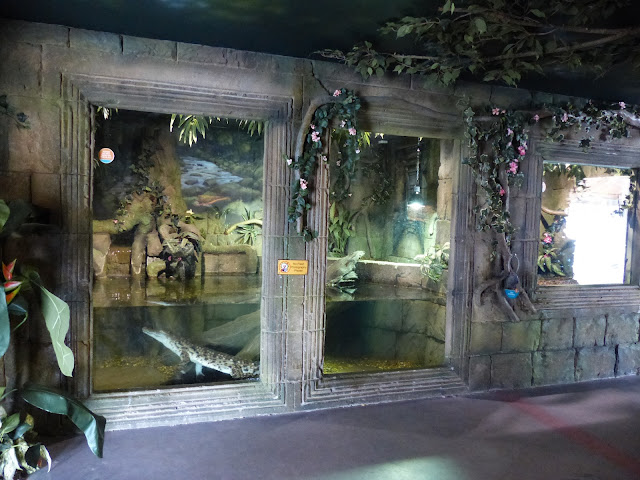 Exploris Aquarium has a seal hospital and rehabilitates abandoned or injured seals and releases them again. All the seals in the hospital when I visited were pups around 6 weeks old and they were so adorable, very lively and active and had faces like little puppy dogs. Each one has a name, and there's a list of names of past released seals displayed. There was a 'Ben Fogle', a 'Charlie' etc and the reasons for their names are given on the boards. 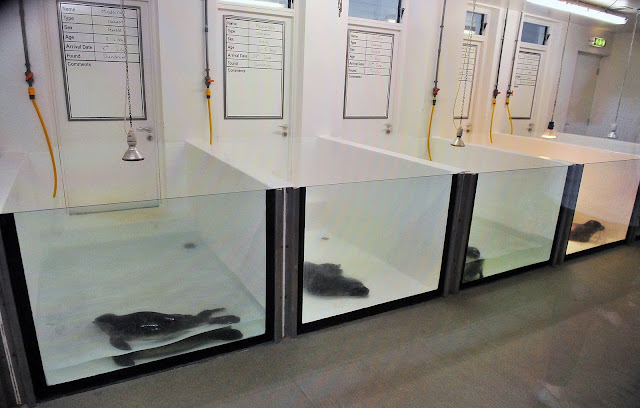 This little boy was called Hans (named after an underwater cameraman) and he was so cute I could have brought him home. 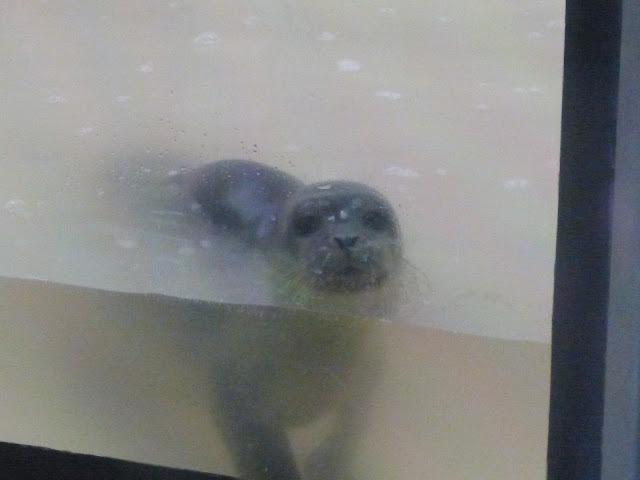 Next up, I went to a National Trust village called Kearney. I had heard about this place last year when it was used as the location for the TV series 'My Mother and Other Strangers' which was a series set in 1943 featuring a true story about temptation and romance with an American GI, set in Northern Ireland and shown Nationwide on the sunday evening 'costume drama' BBC slot.

I really enjoyed the TV show and really loved seeing it in real life. It looks like 'Coyne's' Pub was a completely new build on the set which would explain why I found the layout of the village not quite what I'd remembered from TV.

On the Saturday night my friend Violet landed with a bag full of groceries from Marks & Spencers. I had a small barbecue with me and so we made tea and had a really enjoyable evening sitting in the Bell Tent looking out at the view until the sun had long gone down and she left about 11pm. The following morning I got chatting to a Dutch couple who were staying in a campervan next to me and I was introduced to their family in Holland via facetime! A bit random but all part of the fun.

The last thing I did, which was on the way home, was to properly visit Portaferry and that is where you get the ferry to Strangford across the sea and then home. It is possible to drive to here to Portaferry going the long way round the coast but I think going by Ferry adds to the feeling that you are going on a holiday.

This is an area I would be happy to visit again, and I hope it won't be too long before that happens. The campsite has it's drawbacks, the pitches are just a little too squeezed together, and the loos are so far most people just drive. But the advantages are that it's an un-spoilt area, a real haven for wild life and particularly birds, butterflies and rock pool creatures. The view from the tent says it all for me! 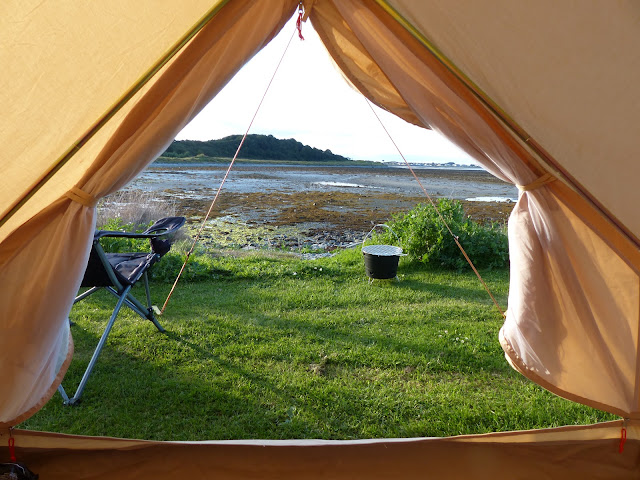