For the second week of our holiday (Part 1 here), after consulting the weather report, we decided to move to the Lake District. We settled on a campsite deep in the Langdale Valley, partly because of the amazing views from the campsite, but also because it was close to Ambleside which in turn isn't too far away from Windermere and the central lakes area. What I couldn't know, until we got there, is that even though it is only 6 miles from Ambleside, the roads are quite narrow and so it takes quite a while to get there anyway.

The central Lake District is an area of two halves, divided by Lake Windermere. The Eastern side is easy to get around with roads wide and plenty of amenities. The Western side, where we were, is windy, narrow and steep roads and it is a lot more difficult to get around. However every corner travelled opens a new part of the amazing scenery up to you. The towns and villages are stuffed full of tourists and the car parks, urban or rural, are all very expensive.

I'd been quite shocked at the cost of parking a car in Whitby, but this was nothing compared to the cost of parking in the Lake District. The car parks all have card readers so you can pay by credit or debit card, and you can stay for either 1 hour, or 3, 4, 5 and 6 hours etc, but you cannot pay for 2 hours. I found myself paying for more hours than I needed because I couldn't be sure of getting back to the car in time. In other cases you have to go through a touch screen process at the pay and display because the registration number of your car has already been read and logged by a camera on the way in. Many attractions even have pay and display car parks, and the average car park cost I paid was between £5 and £6 for maybe 3 or 4 hours. I pay 30p an hour at home!

So after a rant about the cost of car parking I can still report that the Lake District is a wonderful place, well worth the visit. The campsite we stayed is on a working sheep farm and is spread over several fields in the valley between very dramatic and steep mountains.

The village of Chapel Stile is close by and walking distance. There is a very pretty walk all on one level to the village, with two routes, one taking a path beside a river down as far as the Wainwright Inn, crossing over the bridge to the village on the other side - or the other walking along the road for approximately the same distance. The village has a shop and a cafe called the Bramble Cafe and there are two pubs. The previously mentioned Wainwrights Inn and not too far further on the Britannia Inn. Both do bar food and evening menus.

We decided that for Elan, in the future, this would be a great stop for camping trips. As he would be using public transport, and the bus stop is immediately outside the campsite gate. The village is close enough to walk to and has enough amenities in it to keep him fed, watered and happy. Even better it is about an hour away from Carlisle where he is a University student.

We went out exploring the area every day except the first. We arrived late afternoon on the Thursday (after driving through that amazing scenery over the Penines again) and we knew the Friday would be a wet one. So we decided to have a 'Duvet Day' apart from a quick run to the shop for supplies.

Over the week we visited Hilltop which is the home of Beatrix Potter, author and illustrator. This was of particular interest to my son because he is studing a degree in Illustration in university.

We also went for a boat trip on Coniston Water and spent a day at the Aquarium on the southern tip of Lake Windemere, as well as exploring the towns of Bowness and Windemere, and the villages of Coniston and Hawkeshead.

We set up my Bell Tent and Elans Olpro Pop along side the track that leads to the farm. The Campsite itself is spread over various fields but this means that some of them are quite a walk from the amenities. We wanted to be a bit closer (after a week of being far from them at Hooks House Farm) and we found a lovely spot to pitch in. The facilities are excellent but there are no plugs to charge anything. You can give your device (phone, tablet etc) to the owner for a charge of £2. We just did without, there was no phone reception anyway. Elan missed the use of his laptop to an extent, but made do with a newspaper everyday and we played Battleships, Cluedo and did the crossword in the paper most evenings. 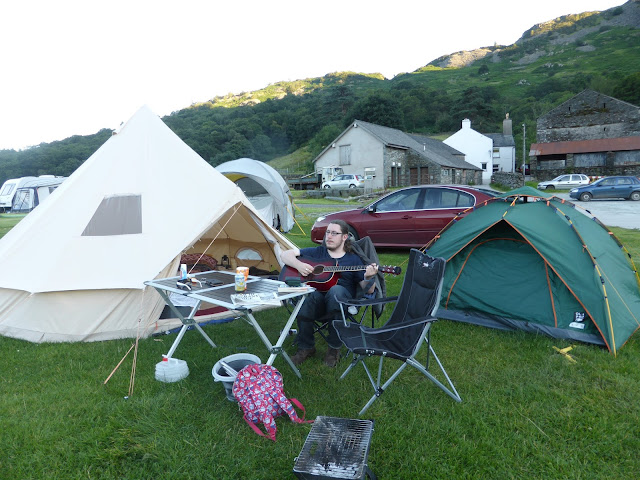 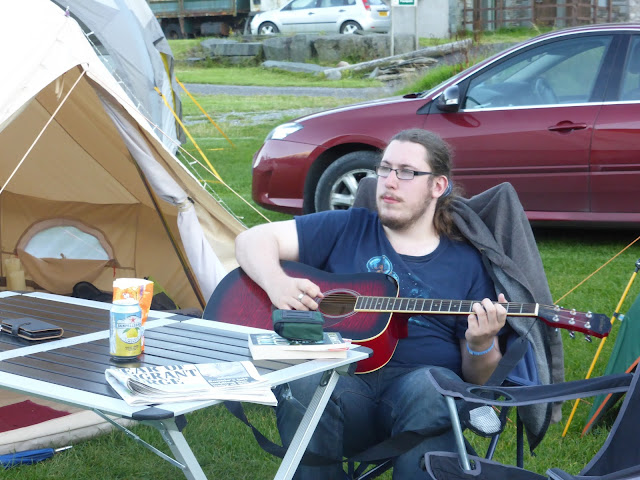 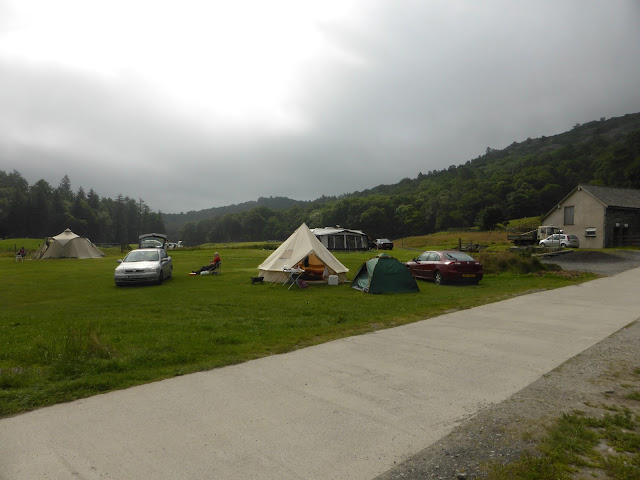 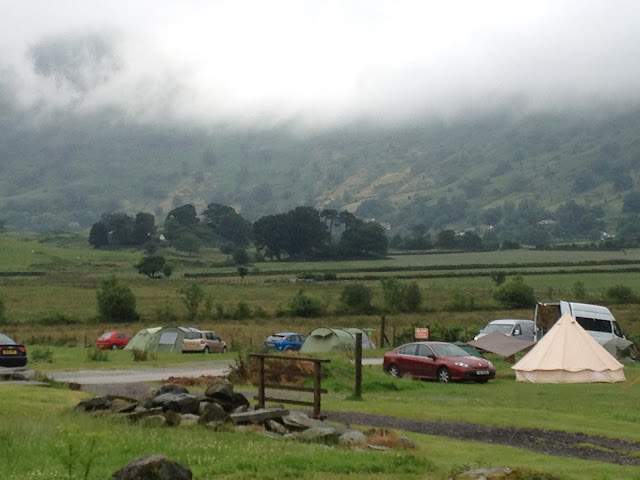 Initially, because of that first wet day, we pitched a tarp over the front of the tent. I put it up in such a way that Elans 'pup' tent was under the cover so he could get in and out in the dry. This worked well but after the initial wet period we had no more rain so there was no point keeping it up. There were some windy spells and we had bother keeping the eyelet of the tarp attached the the spike on the door pole of the Bell Tent so because we didn't need the thing there was no point fighting with it.

No matter the weather, the campsite has a stunning outlook. The best view, which I don't have a photo of, was one evening we'd both been playing travel Cluedo in the tent. It was night and both of us left the tent to go up to the amenity block. We were slightly uphill from the Valley floor, which was completely filled up with a layer of mist and we were above it the layer looking down. There was also a full moon  and because we were completely surrounded by dramatic mountain faces it was like stepping in to another world. Wonderful! But even in the rain, the mountains are stunning.

On the Tuesday we had a heat wave. The campsite prints out a weather report and it is stuck up on the door of the washing up area so we knew about it in advance. We'd decided to take a picnic blanket to the shore of the lake at Ambleside because we could find a spot under a tree in the shade and there would be a steady breeze from the lake itself. We brought a picnic and a couple of books. Elan mostly dozed but even with the breeze it was just too hot. Elan then started to overheat and had a severe headache. When we went back to the car the gauge said it was 39 degrees. We went for a drive because the air conditioning in the car was better than being outside. Eventually, we came across a bridge that was over a river with some woods. Elan took his shoes off and went for a paddle in the water  under shade and started to feel a whole lot better. The following day is was more normal a temperature - at around 27 degrees. We ended up in the Britannia Inn, having sandwiches inside in the shade beside an open window with a steady breeze coming in. We Paddy's are not used with that sort of heat! I also realised that this is why I don't go to Spain. 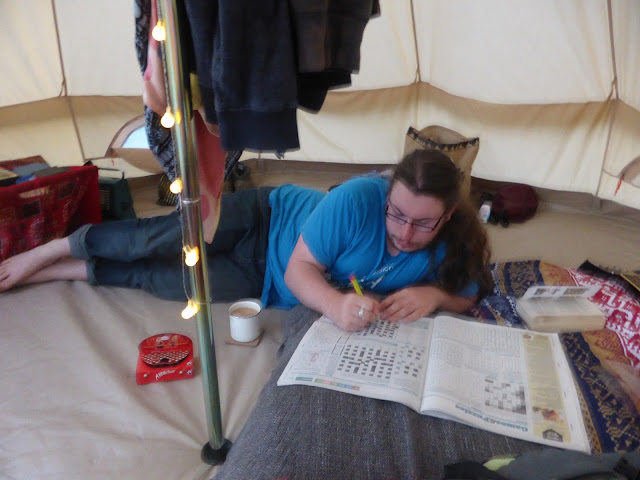 This is my favourite picture of the whole holidays even though it is out of focus (sadly) because it shows Elan being relaxed and happy, which is the whole point of the holiday.

The Lake District is definitely a place I would visit again and Baysbrown Campsite is one of the best I've ever been on. Again, like Hooks House, it was very quiet late evenings probably because most of the other campers were walkers. We had lots of youth groups stay, from scout groups to school groups and they were often up and away by 6.30am in the morning, without so much as a loud cough! The campsite was so quiet at night that somebody opening a zip carried across the fields.

I found that English campsites don't really have much in the way of social spaces like we have in Ireland, and that I missed that element (in my more limited experience of English Campsites). As much as I enjoyed my holiday in the Northern areas of England, I'm looking foward to holidaying in the relatively unpopulated areas around the coast of my own Island next year. It's good to have an epic odyssey once in a while but Irish campers and Irish campsites will always be my first port of call.