Overview of my camping year so far

Hello dear readers, I haven't posted in a while so I thought I'd do something about that. I have been camping three more times since that early trip in March and right now I have one more weekend camp coming up before our main family holiday away in County Kerry. So right now my thoughts are full of lists, and I have lists of lists, and I have two different notebooks, numerous back of envelopes and a document wallet with lists.

First I want to share something. I went camping in the rain. This wasn't normal rain, it was relentless, heavy, constant and set my teeth on edge. We weren't short of space, (fairly big tent) and we weren't short of food or supplies. We were short of patience, and we (myself and two teens) were a bit damp and I had two dogs that were more than a bit damp and stuck in a crate for most of the time. It wasn't fair on the dogs or the kids. So when I came home I made a list. That's right, another list.

DON'T GO CAMPING IN THE RAIN

It should be said that of the two nights we stayed, the first evening was dry and the sunset was unbelievable, we had a camp fire lit and some Home Brew red wine courtesy of a fellow camping friend and life was good. Even the evening of our relentlessly rainy day was saved by a brilliant campers sitting room where we had a wood burning stove and the company and craic was great, and this one thing alone saved my sanity that day. Anyway this rule is not always going to be easy to achieve. Sometimes weekends are paid for and booked in advance. So then we either go and get wet or cancel and don't get a refund. Then there's the accuracy of our forecasts, it's virtually impossible to go by them. But by and large, if there's a wet weekend forecast I'm staying home from now on.

The next thing I wrote was

DON'T GO CAMPING WITH KIDS AND DOGS AT THE SAME TIME

I know this is not for everyone. This is my self imposed rule. It's probably going to be a flexible rule, the dogs do enhance our weekend when our time is planned around them and nice long walks - and the main off-putting thing about that weekend was the fact that it rained so heavily. At home (when it's raining heavily) the dogs would have the run of the house. When we're camping they are not allowed to be untethered or uncrated. They have to be restrained all the time even on walks unless we leave site and go somewhere safe. I'm a lone parent, I had two teenagers demanding my time and attention. I had two dogs also needing my time and attention. I felt guilty on both fronts. So it has been decided that for our main holiday the dogs are going into Kennels, they've been before and are used with the Avril who is the angel that runs the kennels and I know they'll be well taken care of. It'a another bill to pay, but on this occasion I'm putting the kids first. They are teenagers. They will probably not have that many more holidays with me.

Only take one cup and one plate and one spork per person AND THATS IT!

As you can probably tell I took far too much stuff including the kitchen sink. To add insult to injury I didn't even use it all which means it was a) a waste of time including it on my list, b) a waste of time looking and retrieving for the item, c) a waste of my time packing, transporting and unpacking this item when d) I shouldn't have bothered in the first place. 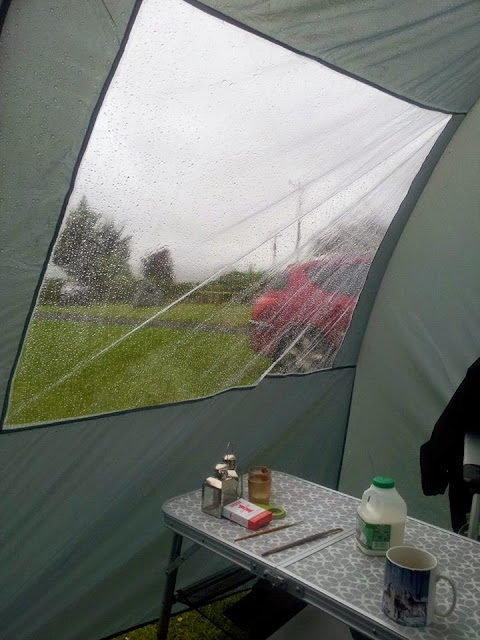