Well, it was sort of unintentional. I turned up for some solo camping to a place called Drumhoney Caravan Park and being so early in the season by the time I got there in the early evening it was practically dark. The family who run the site must have taken pity on me and offered me the use of one of their brand new camping pods, only launched that day! It was very good of them to offer me the pod for the same price as the pitch which I'd already paid, and so I couldn't really say no. I did have a twinge of regret at not being able to pitch my tent which was something I'd really been looking forward to doing. But I knew in the wee small hours of the morning I could well be glad of the slightly warmer temperatures the pod had to offer.

By the time I got the kettle on it was more than twilight, it was pitch dark. The harsh electric strip light in the camping pod was an annoyance so I dug out the fairy lights I'd intended to use on the tent and was pleased to see the ambient light made the pod look very pretty. I've never seen a pod before, but I have read about them and seen pictures of them online, and so I did have an idea what to expect. I believe some pods have sleeping platforms inside them but this one didn't, so it was a matter of setting up my bed on the floor. There was a nice little deck outside for putting my stove on, and the enclosure in which the pod was in included a long built in seat and a picnic table.

I did feel a bit disconcerted at sleeping on the floor of what is essentially a glorified shed, I felt quite isolated in there which is something I don't feel in a tent even if I'm camping alone like I was on this occasion. On the up side though, I could have the ipod docked in it's speaker and listen to some podcasts and even an audio book quite loudly, without disturbing anyone at all.

This was my puppy Tobys first camping trip, and I elected not to use the crate as we were 'indoors'. Well, that was a mistake, I spent all night defending the little space at the back of my sleeping bag from a little wriggly body and after evicting him the first time, he proceeded to sit an inch from my face most of the night. So every time I opened my eyes he scared the wits out of me! I can honestly say I didn't sleep well, it was very cold even in the pod and I was glad at that point I wasn't in the tent instead.

I was up very early on the following morning, following a very strange sound outside that I just couldn't account for. It turned out that there was a fully grown stag in the field adjacent to the site who was amusing himself by rolling a plastic barrel with his antlers up and down the hill. A bit more investigation and I discovered that there's a whole animal farm in the valley beside, and belonging to, the campsite. There were goats, wallabies, minature horses, rare breed chickens that looked like Rod Hull, and some very strange short eared Rabbits! 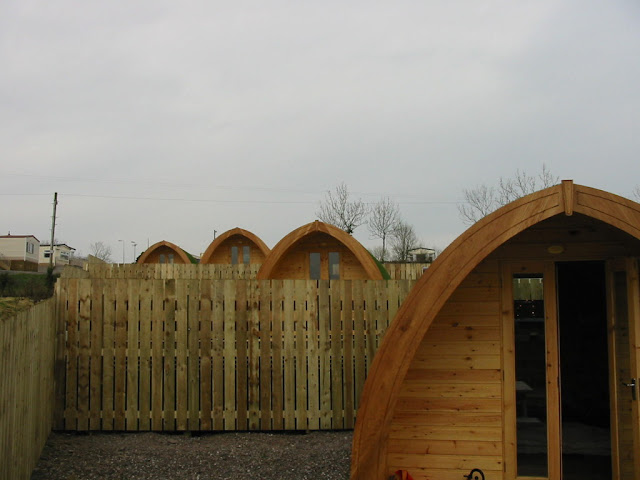 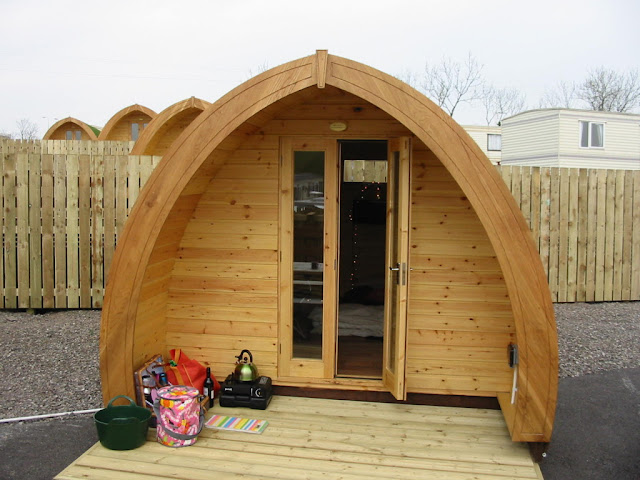 The campsite was very nice, clean and well tended. There are a lot of statics but some spaces for tourers and tents as well. I would go again, especially to bring my two boys to see the animals. I liked the pods but having done that once I would prefer to use my own tent. One of the things I learnt was that when I was packing up it still took me an hour or so to put everything away in the car. Thinking about it I realised that it's the emptying of a tent that takes all the time, not the putting the actual tent away. Once a tent is emptied it can be taken down in minutes. It's getting all the stuff out of it that takes time!
Posted by Campervic at 22:04