Last spring I treated myself to a Bell Tent, I sourced a 4m Polycotton from a German company called Spreen and was happy with the price. It is a 'SIG' ie sewn in groundsheet and it is 2.5m tall in the centre, leaving plenty of head room to walk around with. When I first got it I was distinctly unimpressed, I found the high space difficult to heat, the door being low was hurting my back, the single guy rope outside the door was problematic. Find original post here.

I then braved a stormy weekend still quite early in the season, when I went to Creeslough in Co. Donegal. What I liked about the tent was it looked cool, there's no doubt it's a pretty tent. It was the talk of the campsite! But wet, it was a heavy beast and I didn't have the strength to pack it and one thing became apparent, the bag which was a snug fit when the thing was brand new vacuum packed from a factory in China, was far too small when packing it away normally and worse when wet. Find that post here.

The next time I could have used my new Vango Halo, but the Bell Tent has a way of making you want to use it! Bell Tent camping is a whole different experience to any other kind of camping. It is something you hanker after, and miss when you don't have it. I solved the guy rope in the door way problem by getting a similar coloured guy rope to match and put two on the guy point, and pegged them out at a 45 degree angle so that there was one on each side instead of one in the middle. As the outside temperatures rose the benefits of having a cool space inside a tent (which in a full polyester fabric would heat up like a sauna) became apparent, and excess heat could be controlled by opening the half moon, mesh covered windows in the sides. I could not fault the pitch time of about 8 minutes. That time I had a helper in the form of my very nearly adult son who very much aided with the folding up process and the hoisting it over the lip of the car boot bit. And, I abandoned trying to get it in it's bag, using two long velcro straps to secure it into a package instead. That post can be found here. 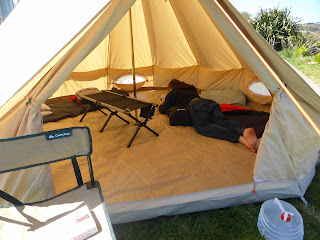 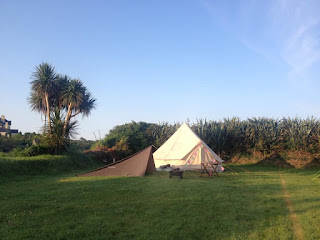 I took it away for a main family fortnight holiday, which was a risk because if this Bell Tent was going to get on my nerves, two weeks in the rain in Co Kerry was going to put the tin lid on it. As it was, I lived quite happily with it and I even did one thing I said I wouldn't. I put bunting on it. I know, I know, I hang my head in shame. The unexpected side effect of this was sitting in a cafe on Valentia Island, with 3 American teenage girls sitting at the next table proclaiming 'Oh my GAWD, did you see that cute little circus tent with the yellow bunting!' and I'm sitting there smiling smugly to myself, that's my tent you're talking about! Original post here. 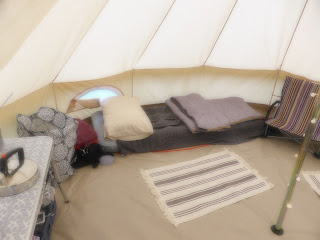 I last used it on a meet with some camping friends. I hardly got to spend any time in it, but there was some hilarity as the guy ropes, which do have to be pitched extended quite far out, turned out to be a trip hazard for drunk people. Over the course of the weekend the tent looked sadder and baggier, until I took pity on it and took it home one last time for the season. Find the post with pictures here.

Now I've used it a reasonable amount of times, I can honestly say the charm has been worked on me. I don't know what it is about Bell Tent camping, but I don't think I'll rush out to buy a tunnel ever again. I don't even want to! (which is saying something for me as I really, really wanted an Easycamp Boston with a flat front for years!). Yes the issues with weight, heat retention etc is still there. It is partly about appropriate use. For example, when it's cold out, use a smaller tent. My Vango Halo, which I'm also very happy with, is the perfect small scale tent for keeping heat around you when you are sleeping. When it's raining, take something (such as my Base Seconds from Decathlon) which is big enough to hang out in and dries quickly, preferably in my parents garage!

But when you get a golden weekend, the sun shines, the breeze is gentle, the views are great, Bell Tent camping has a personality of it's own that makes you want to seize every minute and relive it weeks and months afterwards. I think it's the slightly hippy, dippy nature of it that reminds me of more carefree days. And, I've discovered that the best way for me to enjoy it is to not worry about prettying it up, in fact the more glamping I do, the more pressure I feel to keep it just so! 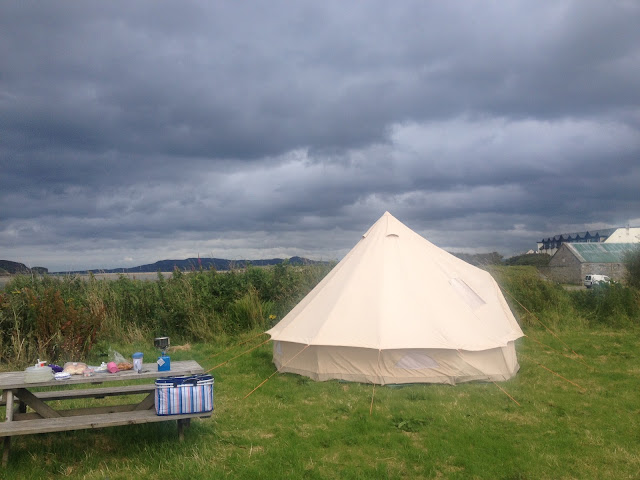 I combined Bell Tent camping with a paring down in all other areas. The cooking was confined entirely to one blue stripy container (see pic) and smaller and better items. The big chair was swapped for a sturdy small one, and a light folding bench. The big table was dispensed with in favour of a Coleman Mini table, and if there was a handy picnic table available, then none were required.

Now all I want, or need is a Ghillie Kettle!