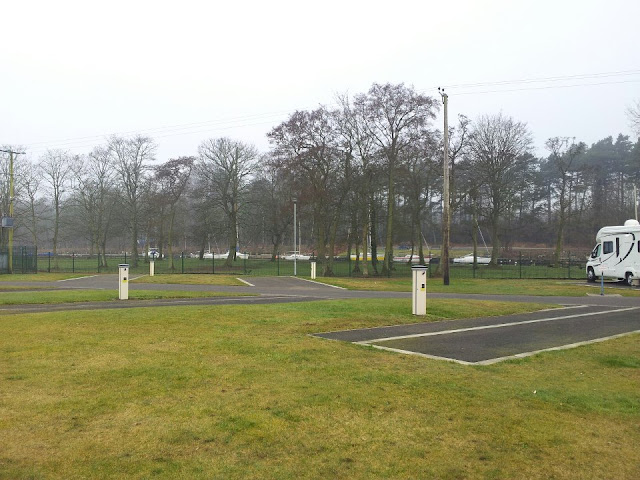 This is the earliest in the season I have ever camped, it being the 1st March! The strange thing is we have had a run of mild and dry weather, it hasn't rained in about three weeks and so the ground has had an opportunity to dry out. I decided that I fancied a weekend away just myself and my two dogs, when a friend and fellow forum member said that it was his Birthday and that he and his family were also planning a weekend on a particular campsite it was an opportunity to have a good catch up with this great family. I had reservations about going to this campsite, as two years ago they had made a change in policy that made it more inconvenient for tenters, which gave preferential pitches to caravanners. Anyone in a tent had to go to a dedicated tent section, that was a good few hundred yards from the toilets, showers and dishwashing facilities. To be honest I'd said I'd never darken their door as the wardens attitude at the time was 'we are actively discouraging campers as they are so disruptive'. The comments were published online by a horrified caravanner who had sympathy with tenters, indeed had been one herself for many a year. I had emailed a complaint which was never even acknowledged.

So the site has peformed a U turn on their policy of not letting tents on the Electric Hook Up pitches, probably realising that £18 a night is still £18 in a recession regardless of what kind of unit occupies the pitch.

Yes it's the first day of March, but it's unseasonably mild and I had EHU and a fan heater and some thermals and an extra duvet on top of my sleeping bag. I didn't need the extra duvet, the heater more than enough provided heat and I had to turn the heating down. My car was on a hard standing with my tent pitched right beside it, and I had chosen to take a tent with small sleeping pods so that I could easily heat the space. I also was using a brand new 8 sided dog pen, only received minutes before driving off for the campsite. It is a 1m high and a great 'holding' pen for the two dogs, no more tangling of tethers! I also had their dog crate which they slept in at night in the tent, and I also took them for numerous walks, some mini walks, some maxi. I would still recommend a tether for one dog, but the pen is great if you have a 'bolter' like me. I have one dog who will not come back when called, he's a bit thick to be honest and often I have chased this little long haired Jack Russell all over the place much to others amusement.

The site was level and dry, it was a bit murky all weekend and so I don't think the photo really does it justice. You can see the row of boats in the background which line a river bank. There were lovely walks to be had directly from the site.

I had a great time catching up with my friends, we had a takeaway and movie night and we also enjoyed a few glasses of red. I loved seeing our visitors coming in, other forum members who live not so far away from the site they can come and visit. Chris, one of our visitors, took three of the following photos. 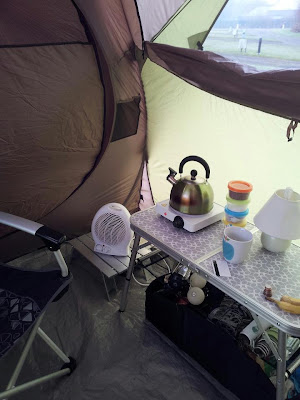 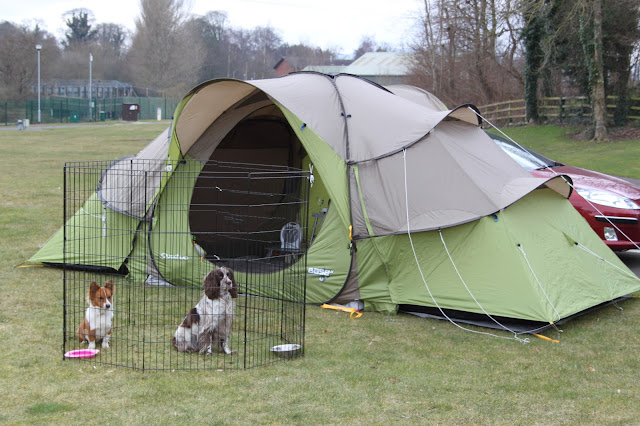