A 'thumbs up' Bank Holiday weekend 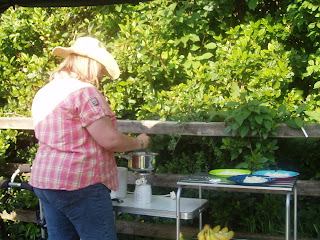 On this occasion I decided to travel to the Share Centre to set up, then return to our home town to pick the kids up from school. Then the idea was to go back to the Share Centre again, and we could properly start our holiday immediately! The reality was that the journey was tiring because the most direct road wasn't good and so I was being rattled to the teeth. In hindsight I think that hour long journey three times in one day was a bit too much.

When I first arrived at reception the bad news was that I wasn't allowed to take the car into the campsite because they've had issues in the past with the ground being churned up. So I was faced with lugging everything, on my own, over to the spot I wanted to pitch on. I didn't go too far, but between all the driving and the lugging and having to hitch myself over a chain repeatedly, the next day I felt as if I'd been beaten up!

I managed to get the tent up ok and I was pleased as I hadn't attempted it on my own before. I did have a moment of panic as the tent was quite saggy in the living area over head. I had a good headscratch and walk around. I could see that the ground wasn't completely even, and one corner was in a slight dip. But then when I tightened the bands in the corners at the bottom of the tent, the straps that you peg through, the tent magically went into it's proper shape. I put up the pup tent (which didn't get used anyway) and I put a small canopy over the door of my tent. The canopy had come with another tent, and is a bit like a tarp but it's got two straps with C clips on the end. I wasn't sure it would work out so this was an experiment. I had to get some more guy rope before the trip, and I already had the king poles. I was very glad of the extra canopy as it rained steadily all day Saturday. Had I not got it I would have had a very wet tent through the sloped doorway. So it meant I could keep the door open and sit inside watching the world go by. I had a camping neighbour in his Gelert Horizon 6 which is a very sturdy looking tent. He brought a rotary washing line which he put the TV aerial on. I've not come across many campers who bring a TV with them! I'm not sure I approve. It's my first time camping beside a TV and it was noisy, more noticeably so when it was approaching midnight. It didn't ruin my holiday but it was an annoyance. I got talking to my neighbour throughout our stay and discovered that they had a games console as well, he was quite pleased with his 'home from home'. I wasn't so delighted that he had pitched so close. 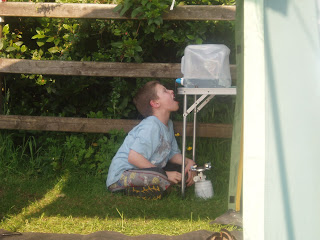 Unfortunatly the wine was flowing and I over indulged. So today, I packed up with a hangover. Probably the worst hangover I've had since I was a teenager. When I bent my head, I felt dizzy - the worst thing when you're packing bags and taking tents down and rolling airbeds and sleeping bags up! Everything is at floor level! My parents stayed in their Caravan so they weren't in the camping section which they said was a shame as the atmostphere is definately better in the camping area. She's not been well recently as she's been diagnosed with heart trouble and so we were careful not to stress her out with too much activity, but she did give the Archery a go. My kids went banana boating, joined by my nephew, and they also went out on the canoes. Today they went on the rock wall. The activities have gone up in price, so although there are two sessions a day for activities I limited them to one per day. The rain on Saturday is forgotten as the rest of the time it was pleasantly warm and dry too. It even dried up by saturday evening so we barbecued two nights. The first night we just got a chips and burgers from the takeaway. Today, my 9 year old nephew got into a strump when his parents made him leave. He wasn't speaking to anyone just stomped out of the reception and slammed the car door after climbing in. I said thats the sign of a good weekend, when they don't want to leave. For us all, it was a 'thumbs up' weekend!
Posted by Campervic at 09:05